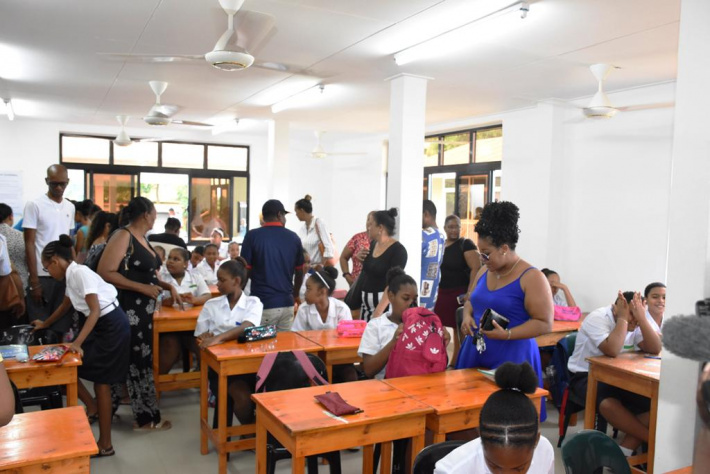 Many parents accompanied their children on the start of the new school term yesterday (Photo: Thomas Meriton)

The principal secretary for early childhood, primary and secondary education, Dr Odile de Comarmond, has said she was happy with the start of the first school term for this year which saw a large number of parents accompanying their children.

Dr de Comarmond made this statement after she had visited primary and secondary schools in the northern region yesterday, namely the Beau Vallon secondary and primary schools, the Beau Vallon creche, the ex-Nisti at Bel Ombre which is accomodating S1, S2 and S5 students from Belonie secondary school, the Bel Ombre and Glacis primary school. She was accompanied by the director general for secondary education, Odile Octave, and other officials from the Ministry of Education and Human Resource Development (MEHRD).

The atmosphere was calm yesterday at the Beau Vallon secondary school and the Belonie secondary school at the ex-Nisti at Belombre for the intake of S1 students where both the parents and students, attended special assemblies, met with the school management, teachers and staff for an induction on the school’s principles and regulations, and the role of both the parents and the students towards the school, studies and others.

They also had some words of encouragement from PS de Comarmond who called on the parents to follow their child’s education and to work and support their schools for the benefit of their children.

She also urged the students to stay focus in their studies and also respect the school’s rules and regulations including their teachers, parents and others.

“We have noticed that a lot of parents have accompanied their children to school and this to us is a good sign and it is very encouraging. We have also noticed that the children are very enthusiastic to start their first day at school and the teachers also are ready, so everything looks set for a good first term for 2020,” she said, noting that most of the schools in the northern region were ready to accommodate the children for the start of the school year given the fact that some minor works still need to be done in some schools.

After coming in a week late during the last term in 2019 to settle in their new location at the ex-Nisti, which was among concerns raised by parents that it will affect their children’s exam results, the head teacher of the Belonie secondary school, Medge Nancy, said that in spite of the parents’ concerns, all went smoothly and well and on top of that, all of the S5 students at the school have passed their IGCSE, DELF and national exams.

Dr de Comarmond further explained that at the Anse Boileau primary and secondary schools, bad weather has delayed work to raise the ground level so that the children could enter their classrooms without having to walk in a muddy compound caused by rainfall and high tides.

She said that this work will take some time but meanwhile a structure is being put in place for the students to access classrooms and the first group of students are attending their first school term today while the rest will start classes tomorrow.

For the La Misère and Anse Louis crèches, the issue was mainly due to health and safety associated with the smell of fresh paint. She noted that the teachers also needed time to re-arrange the classrooms.

At the Cascade crèche where tiling works are being carried out and also a second exit has been constructed, PS de Comarmond stated that it was impossible to clean the crèche during the bad weather and so the students will enter tomorrow.

PS de Comarmond said that work is ongoing to eradicate termites at the crèche of the Baie Lazare primary school as the children enter their renovated classrooms today.

Other officials from the ministry also visited other schools in other regions. 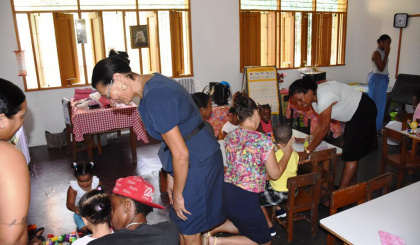