In 2010 Seychelles staged its first Country Music Jamboree which was a great success and attracted attention from many parts of the world. The show is still on the Internet today and still receiving regular hits because perhaps it is based on curiosity of how come a small group or 115 islands in the middle of the Indian Ocean can stage such a Country Music spectacular and breathtaking event with live horses on stage which delighted the audience because horses are not one of our indigenous animal species.

This year, on Friday January 17, 2020 the same team is staging another awesome Country Music Extravaganza which they have aptly call SEYCHELLES COUNTRY MUSIC HOEDOWN and it is being held on the same stage of the main concert hall locally known as ICCS. This time round the Hoedown includes 5 to 8-year-olds singers and performers, students from primary and secondary schools displaying amazing talents, one of our many choirs and several local artistes including some demonstration of Line Dancing.

What is a Hoedown you may ask?

A Hoedown is an old Western term used in the old days in America when pioneers were breaking through the frontiers and occupying the territories known today as the United States of America. They gathered in a barn mainly at weekends to eat and have a few drinks and dance Barn Dances and Line Dances. We have captured this name for our show to recreate the atmosphere of the Old West.

The Hoedown we are staging is based on a new CD called ‘Barry Laine and Friends’ that has been recorded for the show and purpose and is currently on sale in several outlets in the Seychelles on the two main islands of Mahé and Praslin. The Hoedown is part of a bigger project called The Triple X Country Project which set out to record a new CD, stage a Hoedown then purchase a Pedal Steel Guitar and teach someone to play the Pedal Steel Guitar (some people call this instrument a Hawaiian guitar) because the one and only person who could play this instrument passed away two years ago.

His name is Jack Yokowo and this project will honour his memory by bringing back this vital instrument required for Country Music to sound authentic and remain authentic. Although modern keyboards can emulate the sounds of a steel guitar it is not quite the same sound to Country Music enthusiasts’ discerning ears.

Funds collected from the sale of the CD and the Hoedown will go to the Seychelles Alzheimer’s Foundation to assist the elderly in our society who suffer with Alzheimer’s disease. We ask you to join us and support this worthy cause.

Tickets for the show are available from several outlets and the price is R300 for adults and R150 for children aged 6 to 12 years old. The Hoedown will be opened by Minister Jean-Paul Adam and the show starts at 7pm sharp (we will not be late) and end at 10.30pm. Tickets will also be available at the door at ICCS. This is a family event and we have kept the ticket price as low as we can so that the whole family can attend and enjoy Country Music which is part of our heritage. Food and drinks will be available at the entrance of ICCS and there is plenty of parking spaces.

No one knows how and why Country Music became so popular in Seychelles and in Kenya only in our region. There are many theories but no real evidence. Two theories remain popular and one is there was a shipwreck of an American Ship and records (the old 78 Bakelite records of Country Music floated to the shores of Seychelles and Mombasa in Kenya and the locals collected them and played them on their old wind-up gramophones. The other popular theory is sailors on board American ships visiting Seychelles brought the gramophone records for the Seychellois ladies they befriended. Take your pick.

The change of generation

This project also sets out to encourage and involve the young generation to keep our Country Music heritage alive alongside Sega and other music genre we have inherited over the last 250 years of the existence as the Seychellois nation. We are a proud people and we are a peaceful nation and although we have endured hardship in the growth of our nation we have remained non-violent preferring to eat and drink together in an atmosphere of comradeship and companionship. Come and have a good time with us on Friday January 17, 2020 and do not forget to be on time. The Country Music wagon leaves at 7pm sharp or 15:00 hours GMT if you prefer.

The Triple X Project is being managed and staged by:

The Academy of High Performance 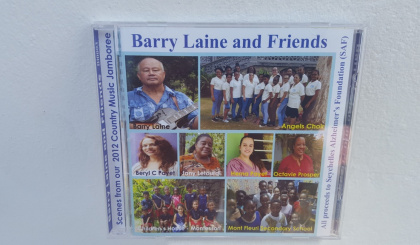