Ministry of Fisheries and Agriculture |26 December 2019 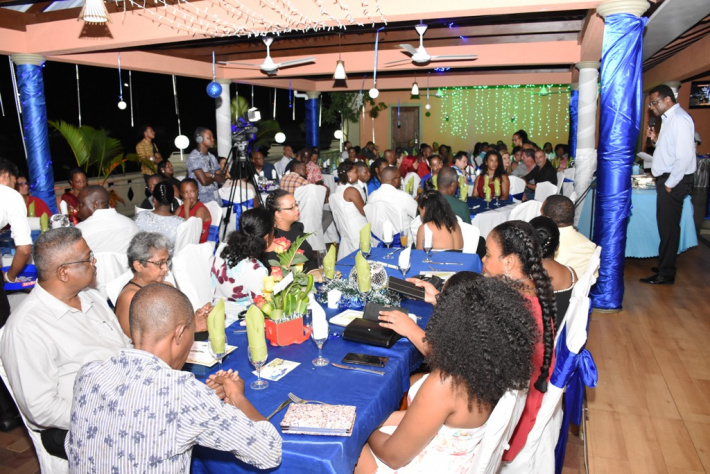 40 employees honoured for their dedication, loyalty and years of service

The Ministry of Fisheries and Agriculture (MoFA) has recognised and honoured over 40 employees for their dedication, loyalty and years of service towards the ministry, Seychelles Agricultural Agency (SAA), National BioSecurity Agency (NBA) and the public service.

This was during its long service award ceremony held on Monday at the Harbour Café, Espace.

A total of seven employees from the parent ministry were recognised and rewarded by Minister Charles Bastienne, for having dedicated 15, 29, 35, 38 and 41 years with the ministry. Among the awardees were principal secretary for agriculture Antoine-Marie Moustache who has served numerous positions within the ministry over the past 41 years and Denise Fred who has been in-service for 38 years.

Mermeda Moustache, who has also served numerous positions within the ministry over the last 38 years, attributes her successes within her career to her passion for agriculture.

Mrs Moustache, who is originally from Trinidad, has worked in Seychelles for the majority of her career upon completing her studies.

“Along the way, there have been many personal achievements but also many achievements in the ministry. As you walk through the market and you see all the produce and the people who are enjoying them, and nowadays we are starting to see little roadside markets with local produce on offer, it indicates the passion people have for agriculture. There may be challenges that are preventing us to produce more but Seychellois in general are into agriculture and don’t need to be persuaded to get their hands in the soil,” Mrs Moustache said.

Among the things she said will take up her time during retirement are a home garden, and other agricultural projects.

“I am always here to share my experience for anyone who needs me or my expertise,” she added.

A further ten employees from NBA were presented with their tokens by the chief executive (CEO) of the agency Marc Naiken. Among the ten, one employee was recognised for serving the agency for five years, with the other nine having served for 26 to 40 years, within the ministry and public service.

CEO Naiken was also presented with a token of appreciation for 40 years of service in the public sector by Minister Bastienne.

“That was in 1989, and from then I have been working for MoFA. The highlights of my career, I have worked many years in research and seen the introduction of many new and emerging technologies, irrigation, drainage systems, new methods of production and these techniques brought about major changes to agriculture. Prior to the introduction of such technologies, farmers were forced to not produce during heavy rainfall but such technologies have greatly improved agriculture,” he said.

“I think after 40 years, with all the experience, I have seen many developments, I have travelled and had the opportunity to further my studies so I am ready to share my experience and knowledge with youths who are interested to join the sector so we can accelerate the development of agriculture in the country,” Mr Naiken stated.

As for the SAA, headed by chief executive Linetta Estico, ten employees were recognised and rewarded for serving between 5 to 40 years. CEO Estico was herself awarded on the night for having served 28 years.

As he will be departing the ministry in the near future, Dr Jimmy Melanie, who has himself racked up 31 years within the ministry, was presented with a token of appreciation by Minister Bastienne.

Minister Bastienne concluded the ceremony by expressing his gratitude to the employees for contributing towards the development of agriculture and fisheries in the country over the years.

He also reaffirmed the government’s commitment towards revitalising both sectors in a bid to boost local production, making reference to the Agricultural Plan 2020, a document which is currently being drafted to develop agriculture within the country. 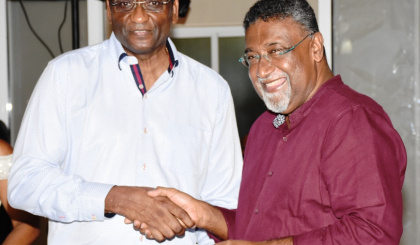 PS Moustache (right) is awarded for his 41 years of service (Photo: Joena Meme)