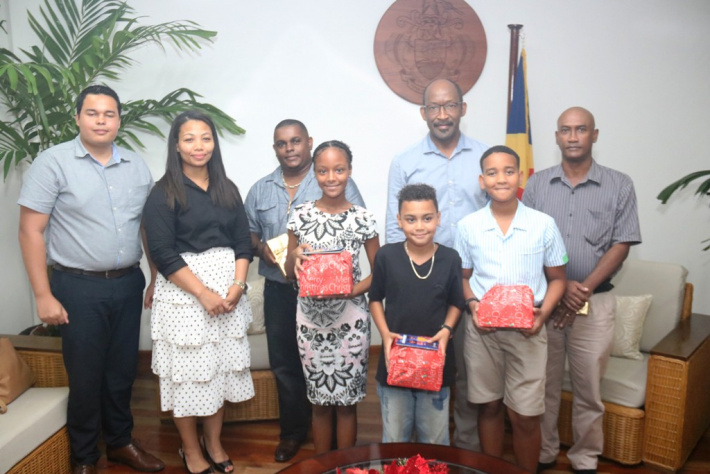 Some of the winners and winning teams with Vice-President Meriton, Ms Appoo and the students’ teachers (Photos: Thomas Meriton)

An island-to-island train network, a hotel with its adjoining restaurant as well as a museum all under the sea, an innovative coconut jam as well as a local fruit smoothie and fruit kebab are but some of the innovative national project ideas for the future.

These are all creations of young students which Vice-President Vincent Meriton had a chance to learn more about yesterday afternoon from the creators themselves.

This was during different and separate presentations by the pupils and groups of students whose project ideas won them a prize in the schools entrepreneurship competition organised by the department of industry and entrepreneurship development in collaboration with the Ministry of Education and Human Resource Development, the youth department and the Seychelles National Youth Council.

The competition was launched in July and the winners were awarded their prizes in October but the principal secretary at the department of industry and entrepreneurship development, Angelique Antat, noted that it was important for the winners to each have a few minutes to explain their winning project ideas to VP Meriton so that he too knows firsthand how creative and innovative our young people can be in spite of all odds.

Also present at VP Meriton’s office at State House to witness the students’ presentations and appreciate their short interactions were officials from the department of industry and entrepreneurship development as well as the deputy chief executive of Enterprise Seychelles Agency (Esa) Jourdan Camille.

The three winners in the primary, secondary and post-secondary categories were each awarded three minutes to share their project and their idea with VP Meriton as he analysed a photo of the project or the product on screen.

In the primary school category, Daniel Zialor from La Retraite school clinched first place with his drawing of an island-to-island SPTC train network, second place went to Etana Pointe from Bel Eau school who drew a restaurant below the sea with sleeping quarters and third place went to Ravin Camille from Bel Eau school who drew an ‘Out of the ordinary’ shaped museum under the Seychelles sea.

“I would really be happy if in the future we could have a train network taking commuters from one part of the island to the other, which would reduce our traffic problems as well as help the SPTC with transportation,” Daniel told the VP.

For secondary level, students pitched their business idea to a panel of judges which could make maximum returns on R500. The winning groups received R500 to work with.

Pointe Larue secondary school consisting of Shania Joseph, Elza Cedras, Georgia Ernesta and Zoe Michel clinched first place with their local fruit smoothies. Members of the group explained that the aim was to have a healthy drink to help fight obesity at the school as all the imported juices contain a lot of sugar and artificial flavouring with very little if any fruits at all. They use fruits like mango, passion fruit and others as well as yoghurt and honey instead of sugar to taste.

They said the product, which was made in the school’s kitchen, sold very well and over a period of four days they had more than tripled their return on the R500 invested.

Members of the group noted that the idea of their project was to promote eating of healthy snacks among students which was much appreciated.

Tara explained that they used local fruits mainly soursop (Korsol) due to its many health benefits.

“It was sad to note that many pupils did not know that we could make juice out of soursop and there the juice was not too popular,” Tara said.

The group who will still be together next year said they are determined to promote their local fruit juice further especially during school activities.

At post-secondary level, first place went to the Seychelles Institute for Agriculture and Horticulture (SIAH). The team made up of Tahira Appasamy, Shamira Chang-Waye and Craig Edmond came up with a coconut jam made of the tender but firm flesh of the koko rouz.

Two teams from the Seychelles Business Studies Academy (SBSA) finished joint-second. One of the teams came up with a maternity hospital to offer specialise and private services for mothers. The team consisted of Samia Brioche, Kelly King and Lee Sabadin.

The other team came up with an electric bus project and the members were Jeff Barbe, Steve Monnaie, and Manisha Assari.

Another team from SIAH clinched the third place with their project to produce biogas from fresh cow dung. The team consisted of Fredo Dubel, Kelvin Nancy and Jamila Marie.

All members of the teams were accompanied on the visit to the VP by their teachers for support and they each received a small token from Mr Meriton.

Impressed by the level of enthusiasm, innovation and creative business development ideas for the future, VP Meriton said the presentations have shown that the department of industry and entrepreneurship development, the Ministry of Education and Human Resource Development and other partners can work together to turn the students’ ideas into reality. He said the enthusiasm displayed is really encouraging and bodes well for the future.

“These ideas can be put to work in the very near future. It is clear that we have the raw materials, we have the enthusiasm and what we need now is how to accompany the youth, provide them with seed capital, the services and aftercare that they need so they can transform their ideas,” VP Meriton stated.

He said the ideas are really good and innovative and should be seriously considered and protected as government places a lot of emphasis on the development and growth of small medium-sized enterprises (SMEs) so that they can play a more active role in the economic development of the country.

VP Meriton added that the initiative to have such a competition has allowed to discover youths out there with entrepreneurial ideas and many other ideas have potential for future development which the government fully supports and encourages. 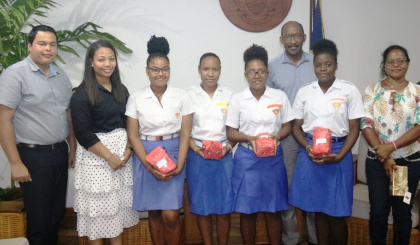 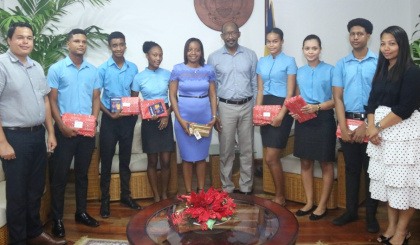