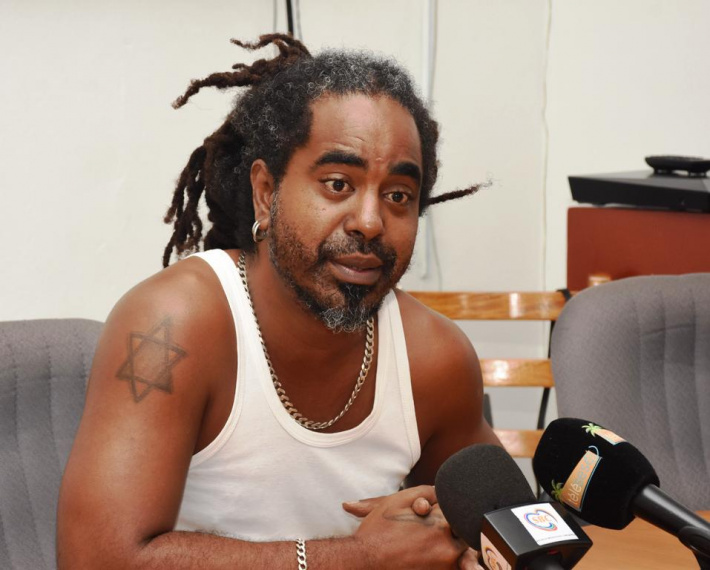 Fans of local reggae dancehall singer, Jakim, should gear up for the artist’s massive celebrations to mark 20 years since he joined the local music scene.

In a press conference, held on Monday, Jakim revealed his new album ‘Dil i Real’ (D.I.R) which he is launching on Saturday, December 21 during a free concert at the Stad Popiler car park.

‘D. I. R’ will be his first album since his last album, which included hits like ‘Donn ou Bal’, came out over five years ago.

A total of 22 songs appear on the album ‘D. I. R’ and features artists such as Banks, Gunz, Cocky, Tania, Thyra, Mia, Alana as well as popular Mauritian reggae singer, The Prophecy.

For those who wish to add Jakim’s 10th album to their collection, they will be able to purchase it at the concert for R100.

“My album has over twenty songs because there’s a lot that needs to be said. Even the title of the album, ‘Dil i Real’, reflects this; we are talking about the present reality,” Jakim noted in his press conference.

As for his upcoming concert on Saturday, Jakim explained that aside from him as the headliner, fans will also enjoy performances from a variety of artists who have supported and played a key role in his journey.

Jakim explained that the decision to release the album on the day of his concert is a concerted effort to fight against pirated content.

He noted that people will be able to appreciate his new music and purchase the album on the spot, and hence people will not have time to illegally download and distribute his songs before it gets to the shops.

Although the idea of free pirated music is compelling for most, Jakim stressed that this practice is disastrous to the music industry, particularly a small one like Seychelles.

“We cannot tolerate pirated music because it has a negative impact on artists and musicians[…] Seychellois need to support their fellow countrymen and have to understand that whatever someone has put effort should be encouraged and valued,” Jakim strongly voiced out.

Thirty-seven year old Jakim (real name: Carlos Dorasamy), debuted his journey in the music industry at the brink of the millennium, in 2000 and has since then grown to enjoy a successful music career.

“I started off wanting to become a footballer, but with time I found that music was always a consistent element in my life,” he said.

“During these 20 years I have helped in developing the local music industry, particularly the genre reggae dancehall,” Jakim noted.

“I was able to face the challenges of this industry because there were artists, with the same background and drive, like Elijah and Mercenary, who were also forging a similar path. This is the kind of support that you need when starting out; we were not by ourselves and we kept pushing each other.”

“Back in the day – with the system in which the country was in – it was very difficult for us. Our music was not being played on the radio and we had to fight to be heard on mainstream media since we did not have internet access.”

In a moment of reflection, he highlighted how this has seen a complete 360 change since he can now easily hold a press conference with media outlets, which was not imaginable 20 years ago.