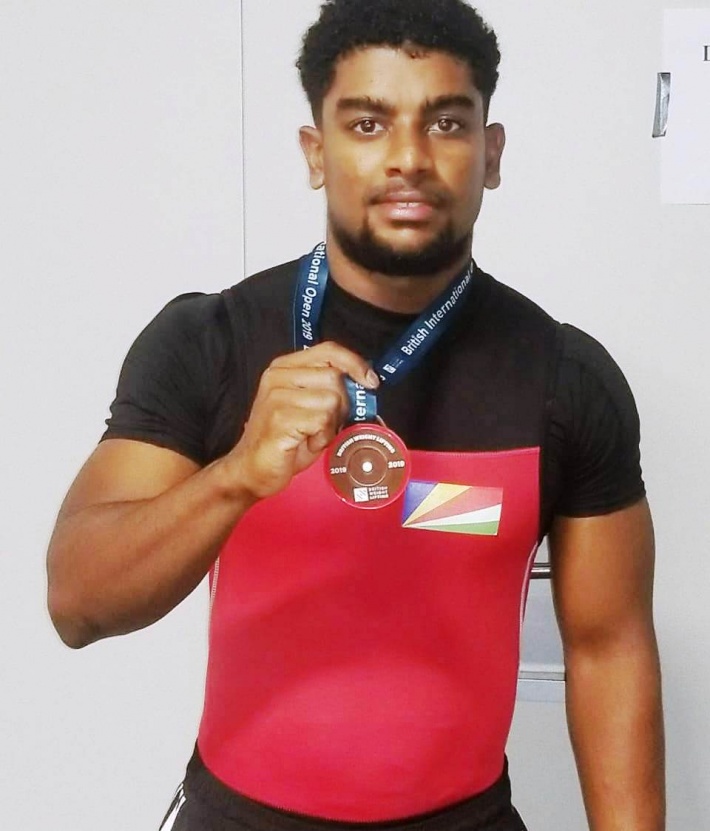 Rick Confiance’s preparation for the 10th Indian Ocean Island Games is going as planned and he proved it with a bronze medal at the British International Open Championship organised simultaneously with the British Senior Championships in Coventry, England.

On the platform of the Ricoh Arena, Confiance got three individual records by lifting 115kg in snatch and 138kg in clean & jerk for an Olympic total of 253kg in the newly introduced 73kg weight category.

In snatch, Confiance lifted 110kg, then 115kg before failing at 120kg. In clean & jerk, he opened with a personal best and Seychelles record of 138kg but then twice failed attempts at 143kg.

The gold medal was won by Czech lifter Petr Petrov with 135kg in snatch and 160kg in clean & jerk for an Olympic total of 295kg.

In second place for the silver medal was Englishman Gareth Evans with 131kg in snatch and 155kg in clean & jerk for an Olympic total of 286kg.

Overall at the two competitions – British International Open Championships and British Senior Championships – Confiance was ranked fifth out of 11 lifters.

The first time Confiance competed in this newly introduced 73kg weight category was during the National Open Championship hosted by the Seychelles Weightlifting Federation (SWF) on Saturday April 27, 2019 at the Les Mamelles community centre. He finished with 106kg in snatch and 131kg in clean & jerk for a total of 237kg.

Accompanied by coach Reginald Estro, Confiance is expected back home on Wednesday and is to leave on Friday for Chomburi, Thailand, where he will join members of the Seychelles weightlifting pre-selection who have been following intensive training since the first week of May.

Before the athletes come back home, Seychelles Weightlifting Federation (SWF) chairman Robert Rose will travel to Chomburi during the last week of the camp to conduct their performance test for them to make the final team for Mauritius.

Two other lifters – Janet Georges (71kg) and Clementina Agricole (59kg) – who are also part of the national team, have decided not to attend the training camp, opting to train locally with their personal coach.

It is not clear when and if the two athletes will take the test to be part of the final team.