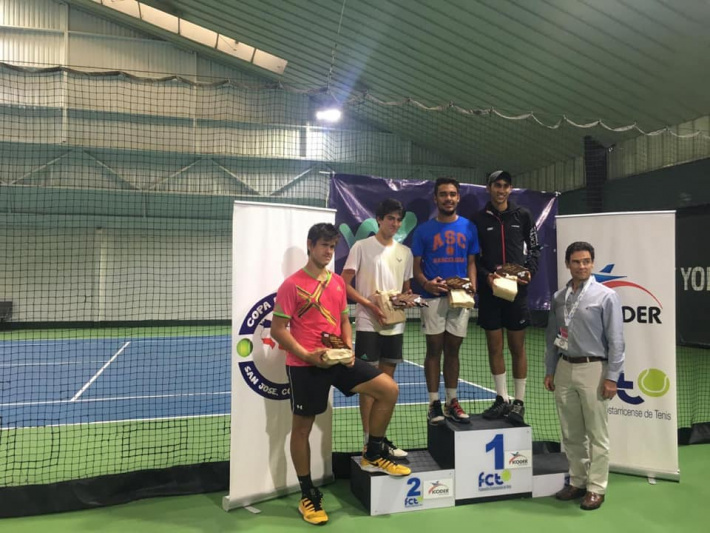 Laporte once again reign supreme to win the singles and the doubles where he teamed up with his loyal partner and teammate of the Sánchez-Casal Academy Keean Shah.

Already a name to be reckoned with at his level, it is very important to note that Laporte marched on to win the singles title with dropping a single set.

His journey at the tournament began in the first round where he easily beat Daniel Marcano of Venezuela 2-0 (6-1, 6-2), before moving to round two where faced Andreas Chapides of Cyprus .

Once again, had no difficulties in progressing as he eliminated Chapides 2-0 (6-0, 6-3), to book a place in the quarter-final where he played against Marcelo Marino Hidalgo of Colombia to register another straight-set victory.

In the semi-final, Laporte met some fierce resistance  from Julian Lozano of Costa Rica, who surely had the back-up of his home crowd, but managed to keep his composure to win the match 2-0 ( 7-6, 6-3) for a spot in the final and a shot a second successive title.

In his way this time was his teammate and doubles partner Shah who himself did quite well in the other route to the final.

After a tight first set where Laporte narrowly won 7-6 for a 1-0 lead, the Seychellois player showed off his arsenal in the second set which he easily won 6-0 to win the match 2-0 for a second consecutive singles title on the South American soil.

With his loyal teammate and partner Shah, Laporte was again untouchable in the doubles where the dynamic duo from the Sánchez-Casal Academy swept everyone in their way to clinch their second consecutive J% doubles title.

In the first round, Laporte and Shah were up against Daniel Cordero and Jose Armando Sequeira sanchez of Costa Rica where they wasted no time to eliminate their opponents in straight sets 2-0 (6-1, 6-1) to march on to the quarter-final where they clashed against Meecah Bigun and Leanid Boika of the United States.

Compared to their first round match, Laporte and Shah had to put up a fight against the Americans.

After winning the first set 6-4, the Sanchez Canale duo was surpassed by Bigun and Boika in the second set which they won 6-4 to tie the match at one set apiece.

With the sight of another title in their scope, Laporte and Shah managed to rally past their opponents in the decider set which they won 10-6 to win the match 2-1 and book their spot in the final, where they met Axell Delgado Porras and Luca Lo Nardo of Costa Rica.

Not wanting to go into a third set as was the case in the quarter, Laporte and Shah shifted into a stronger to eliminate the Costa Rican pair 2-0 ( 6-3, 6-3) to book their spot in the final.

In the final the Sánchez-Casal pair faced Valentin Basel of Argentina and Jelle Korthuis of the Netherlands.

With the motivation of second consecutive title, Laporte and Shah took the home straight by storm, winning the match 2-0 to take home the title. The set scores of the final match were 6-3 and 6-4.

The International Tennis Federation (ITF) World Tennis Tour Juniors gives players aged 18 and under the opportunity to travel the world and develop their talent.

Featuring over 650 tournaments in 140 countries, the Tour sees players compete across six levels of tournament – from Grade A (which includes the junior Grand Slams) through to Grades 1, 2, 3, 4 and 5 (the lowest grade).

The ITF World Tennis Tour Juniors provides a launch pad for the best players to go on and achieve success in the professional game.

The top eight juniors at the end of the year go head-to-head at the prestigious season-ending ITF World Tennis Tour Junior Finals.