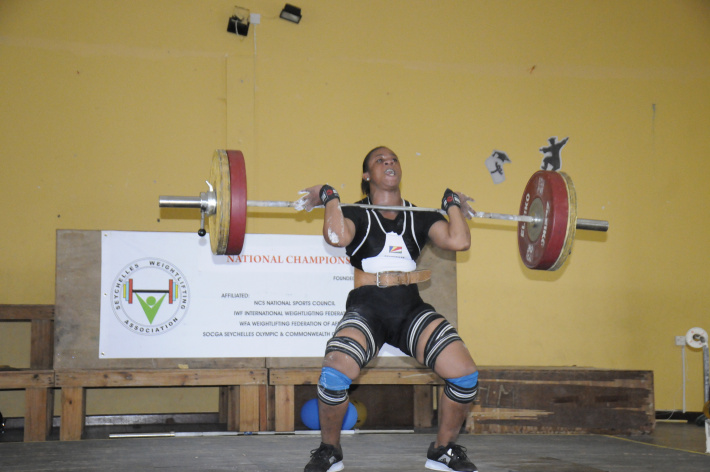 Against all odds, female lifter Ruby Malvina, freshly out of suspension, came out strong on Saturday to set two new national records during this year’s National Championship held at the Bel Ombre district community centre.

After only lifting 75kg in snatch to miss out on beating the standard of 77kg, Malvina, who competes in the 64kg weight category, lifted 100kg in the clean and jerk to better the standard of 91kg to finish with a total of 175kg to improve the set standard total of 168kg.

Explaining the new records, chairman of the Seychelles Weightlifting Association (SWA) Robert Rose said they replaced the old records, or standards set by the association in March last year after the International Weightlifting Federation Executive Board approved 10 new bodyweight categories for each gender in the senior, junior and youth age divisions.

Other than Malvina, Joelita Coloma, Romantha Larue, Chakira Rose and Anisha Valmont were also competing to better their performance.

In the 81kg category, Coloma had no opponent and her performances were 68kg in snatch and 85kg in clean and jerk for a total of 153kg.

In the 76kg category, Larue was also a lone competitor and she managed 75kg in snatch and 100kg in clean and jerk for a total of 175kg.

The 87kg category was the only group where there was real competition, precisely between Rose and Valmont.

Rose was declared the winner because she lifted the bar with the same weight first.

In the men’s competition, most of the lifters were loners, expect for the 102kg category where Cyrous Farabeau went head-to-head with Derrick Come.

In the 67kg category, Daryl Riaze collected a grand total of 192kg after snatching 80kg and lifting 112kg in clean and jerk.

Also alone in the 73kg category, Rick Confiance snatched 115kg and lifted 136kg in clean and jerk for a total of 251kg.

Junior athlete Samuel Saminadin who competed in the 96kg collected a grand total of 184kg after snatching 82kg and lifting 102kg in clean and jerk.

Jean-Yves Renaud competed in the 96kg and his final result was 175kg. He snatched 85kg, while in clean and jerk his performance was 90kg.

In the 109kg category, big man Robert Kilindo collected 200kg as his final total after snatching 90kg and lifting 110kg in clean and jerk.

Still at Saturday’s National Championship, it was officially announced that veteran lifter Steven Baccus and Romentha Larue are the male and female lifters of the year 2019. 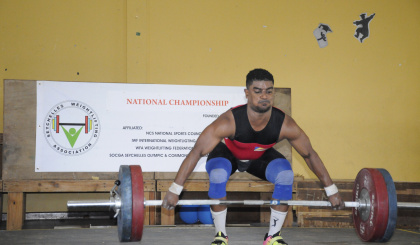 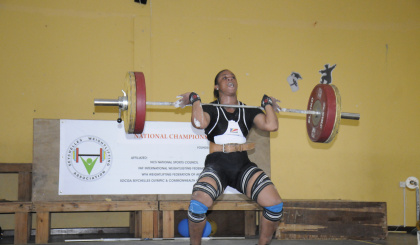