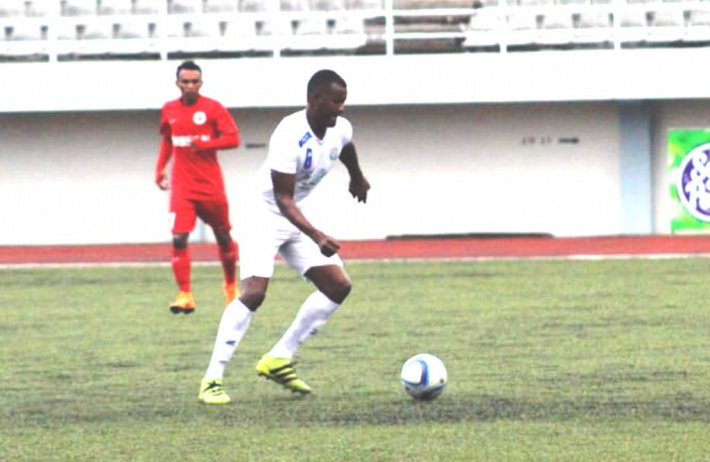 Northern Dynamo came from behind to draw 1-1 with league champions Côte d’Or at Stad Linite in a SeyPearl Premier League fixture on Thursday afternoon in damp weather.

In fact, it was a relief for the Seychelles Football Federation that this match did take place after the encounter between St Louis and Red Star Defence Forces on Wednesday had to be called off due to bad weather which is currently affecting the country.

The onus was on the reigning league champions in this match to get their season on track after losing their last two matches and therefore they responded positively from the kick-off as they went on the offensive and in the opening minute, Malagasy Kassah collected a long ball to fire at Northern Dynamo goalkeeper Ricky Pool who pushed the ball into corner.

Kassah again failed to beat goalkeeper Pool from the resulting corner floated by Nigerian Peter Adeshina onto the head of the Malagasy striker but he headed over the crossbar.

Despite the early pressure, Northern Dynamo countered in the 9th minute as Carlos Onezime and Malagasy Rajamana exchanged passes but Côte d’Or goalkeeper Jean-Paul Lesperance was quick off his line to thwart the danger from Rajamana.

In the 11th minute, Malagasy Jonas picked out Kassah with a teasing cross but goalkeeper Pool produced a brilliant point blank save to keep the ball out.

Côte d’Or broke the deadlock in the 37th minute from another corner lofted by Adeshina to the back post where Jonas teed up defender Benoit Marie from 30 metres out and the national team skipper let fly a fantastic shot which crashed into the roof of the net to make it 1-0 at half-time for a deserved lead for the Praslin team.

Northern Dynamo though came back for the second half a different team as they had a go at their more illustrious opponents to good effect by leveling the score in the 50th minute as Rajamana linked up with Onezime to test goalkeeper Lesperance who kept him out but the ball fell to the same Onezime who set up Rajamana for a second time where he made no mistake to equalise at 1-1.

The goal rattled Côte d’Or who had to endure a good spell from the north Mahe team as they had the upper hand but they almost gifted the Praslin team a goal in the 71st minute when Aldo Dufresne lost possession to Adeshina who in turn picked out Perry Monnaie in a good position but the former La Passe striker could not direct a clear chance on target.

Northern Dynamo nearly took the lead in the 83rd minute from a Rasaminana quickly taken free kick to substitute Lucas Panayi whose instinctive shot was blocked and he got a second bite of the cherry to fire at goal but his shot hit the foot of the post as Côte d’Or rode their luck.

In the 88th minute, Northern Dynamo had another good chance from Panayi’s near post corner to the onrushing Rajamana whose glancing header sailed narrowly wide as the game ended in a stalemate much to the frustration of the Côte d’Or camp who have now collected a poorly two points from four matches and their manager Andre Bédier was not pleased with this further setback.

“We had a lot of chances which we failed to convert as this would have set us up nicely to win but we did not play well in the second half and we are disappointed with this result,” Côte d’Or manager Bédier told Sports NATION.

As for Northern Dynamo manager Nigel Michaud-Payet, he also felt his team could have won this math based on their second half performance.

“This match could have gone either way though we did not start well as we have not trained consistently due to the adverse weather but we had a good second half and had some decent chances but we are satisfied with a point,” the Northern Dynamo manager said.