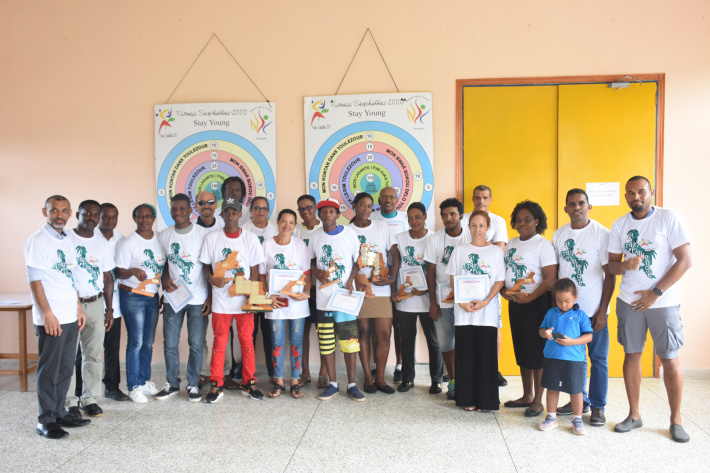 The winners and organisers in a souvenir photo

The winners of this year’s Mahé Crazy Challenge hosted by the Sports for All Unit within the National Sports Council last Saturday, received their prizes during a ceremony held recently at Stad Linite.

Samuel Vidot finished second with a time of 9h19:53.6, completing the course ahead of Malagasy Gerard Jaomaro, winner of the past two challenges who was third in 9h51:28.

In the women’s category, Nelda Freminot who was taking part in her ninth challenge, clocked 12h52:50.2 to finish first, ahead of Brenda Larue who took the runner-up spot in 12h54:44.4.

Commenting on the event, director of the Sports for All Unit Francis Remie said it was big success since a record 40 people managed to complete at least the first phase which ended at Cap Ternay.

He added that it was obvious that this year’s contestants were better prepared, based on their performances and speed, as well as the ‘zero casualty’ record registered.

Mr Remie further added that as extra incentives, the NSC is in the process of signing future winners for the same event at international competitions.

Gino Belle: “In 2016 I was just testing the waters, but this year I came well prepared and I knew in advance what I was coming to do. It was more difficult this year as there were more people and they were all aware of my presence, so they were in a way marking me very tightly.

“As for my preparations, there was nothing extra. I trained twice daily except for having more rest closer to the event.”

Nelda Freminot: “It was quite tough as there were a lot of competitors and I had to keep increasing my speed to maintain the gap, especially with the runner-up and third-place finisher. I prepared myself very well for the event and I am lucky to have my husband as training partner since he is also an active participant. I am not surprised with the result since I was well prepared.”

Past winners of the Mahé crazy challenge