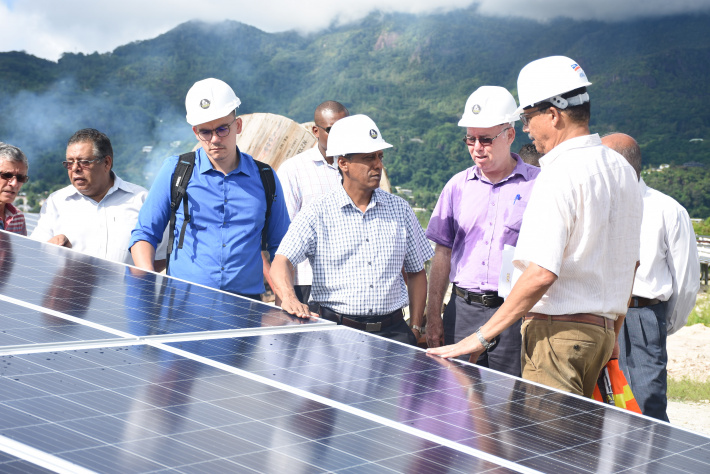 President Danny Faure yesterday visited the Public Utilities Corporation (PUC) wind turbine and solar panels project located on Ile Romainville, where he discussed with PUC officials the progress made thus far, the benefits it will afford the country, and the remaining phases of work before the plant is commissioned to the PUC grid, as from January 2020.

Accompanied by PUC chief executive Philippe Morin, deputy chief executive Joel Valmont, member of the board and chief executive of the Seychelles Energy Commission (SEC) Tony Imaduwa, President Faure was guided through the solar farm project consisting of the 5MW solar farm and the democratisation of 1 MW photo-voltaic (DPV) project, both of which are expected to contribute significantly to the country’s goal towards meeting 5% and 15% of the country’s total energy demand through renewable energy by 2020 and 2030 respectively.

The 5MWp solar farm, built on the southern half of the artificial island, a stone’s throw away from St Anne Jetty, is being funded through a concessional loan amounting to approximately US $8.5 million, payable at a 2 percent interest rate, from the International Renewable Energy Agency (Irena) – Abu Dhabi Fund for Development (ADFD), with the remaining US $1.7 million from PUC’s own equity, bringing the project total to USD 10.2 million.

During President Faure’s visit, Mr Morin outlined to him the project noting that some installation works of the forecasted 14,850 solar panels have been delayed due to persistent heavy rainfall, but that it is nonetheless on track to be commissioned by January 2020, a 6-month delay from when it was initially scheduled to be completed. The project was initiated in November 2018.

“We explained the challenges such as the delays caused by persistent rainfall. Despite the delays, we have made satisfactory progress and we hope that by January of next year, we can have everything installed and the system can be put on the line, to start producing electricity. It is quite a complex job and quite a lot has to be done, here on Romainville and also on Mahé,” Mr Morin explained.

Further to installing solar panels, PUC is investing in a 3.4MWh battery which will be located at Roche Caïman to stabilise the electricity grid and compensate for the fluctuations in the energy output from renewable energy sources and a second subsea cable between the man-made island and Mahé, to ease the transfer of energy to its electricity plant. The first cable serves to transfer energy generated by the 6MWp wind farm, also housed on the island.

The photovoltaic (PV) project will double the amount of renewable energy produced as well as considerably reduce the emission of greenhouse gases related to fossil fuel consumption, and curtail the annual fuel consumption. It will have the capacity to produce 7GWh yearly, which translates into 1.5 percent of the country’s annual energy demand, and the electricity needs of approximately 2,000 homes. This will also benefit consumers in terms of price stability, noted Mr Morin.

As he toured the facilities and interacted with the contractors,Complete Energy Solution (Ces), and consultants behind the project, President Faure commended them for their hard work despite the challenges they face.

Concurrent to the 5MWp solar farm project on Ile de Romainville, is the Democratisation of PV project which aims at helping welfare beneficiaries and government agencies with solar PV technology. Under the project, 84 households will have the capacity to produce 3 kilowatt peak (3kWp) through rooftop PV installations, equating 300 units of electricity monthly, the units consumed by a typical household in Seychelles. Forty-two panels will also be installed at the Barbarons emergency housing estate. In view of unstable rooftops, some households will benefit from a collective 1MW solar farm which is soon-to-be completed on Ile de Romainville. Eleven government institutions will also benefit from 30kWp, 90kWp and 180 kWp units including the coastguard base, Victoria Gymnasium, National Assembly and seven hospitals. The contract was awarded to SEFTECH (India).

This project is also in line with the government’s vision for the energy sector as per the energy policy drafted in 2010. It is estimated at the total cost of US $3.6m for an aggregate capacity of 1.9MW and it is being entirely financed by a grant from the government of India.

Wind is considered more efficient than solar as wind turbines can generate energy around the clock but solar energy is the way forward for Seychelles said Mr Morin, noting that wind turbines are not as effective in Seychelles as they cannot be strategically placed on top of mountains where more wind energy can be generated due to logistical constraints and heavy financial burden of transportation.

The accompanying photos by our photographer Jude Morel show some highlights of the presidential visit on Ile de Romainville yesterday. 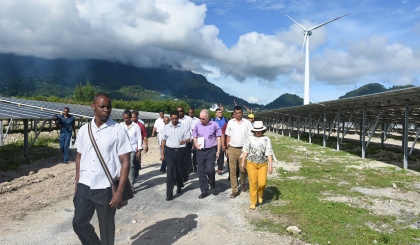 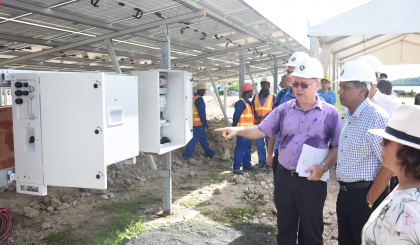 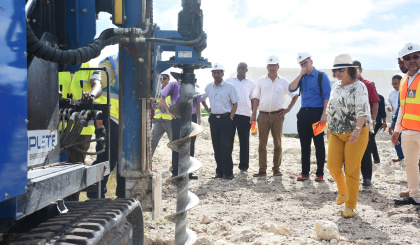