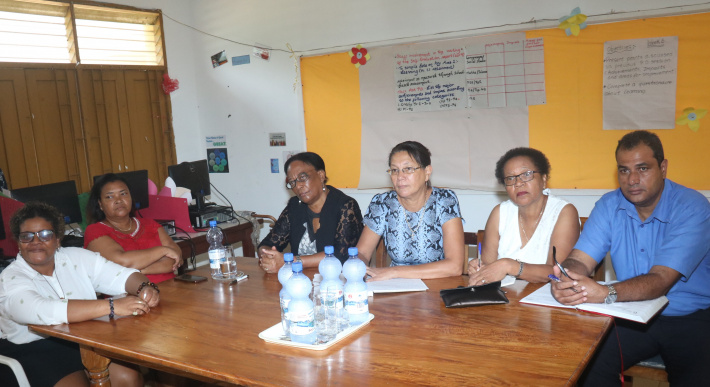 Security will be reinforced at the Anse Aux Pins primary school following the physical assault on a young female teacher by a female parent on Wednesday morning.

The announcement was made by Minister for Education and Human Resource Development, Jeanne Simeon, in a meeting with teachers, staff and management of the school yesterday morning.

The teachers had requested a meeting with the officials of the ministry to address their safety and other security concerns among other issues related to discipline and anti-social activities by students at the school, following the assault incident.

Minister Simeon assured the teachers that her ministry will do its utmost to secure their safety and that of the students but also urged them to take their teaching profession seriously.

She also urged parents to respect school policies and to use the proper means to address their issues and concerns.

It is not the first time that such assault incidents, among other disciplinary problems, have occurred at the Anse Aux Pins primary school. Dr De Comarmond, who acknowledged the facts, said the ministry had started already to address security problems in schools, including that at Anse Aux Pins primary school, where the construction of a concrete boundary wall has started and is expected to finish in time for the start of the school term in January 2020.

“We are now enforcing security because it looks like some people are coming through the created gaps in the fence and so we have put additional security so that at least we can ensure that the procedures are respected and that no parent should go to the class without being accompanied by the security officer or without the knowledge of the head teacher,” Dr De Comarmond said, noting that normally, anybody coming to see or meet somebody at any school should be accompanied by the security officer to the head teacher first before the student, teacher or other is called to the office to meet them in the presence of the head teacher.

She further said that the incident happened without the presence of the head teacher as she was attending to some classes where teachers did not turn up for work and apparently the parent who assaulted the teacher had entered the school compound through one of the breaches in the fence.

Dr De Comarmond said that the apart from the security procedures in schools, the ministry also has introduced CCTV surveillance in certain schools based on the nature of the grounds and will place CCTV cameras at the Anse Aux Pins primary school and Plaisance primary school.

She noted that the ministry is conducting its own investigation into the incident and that the two children of the parent will continue their schooling at the same school and will be offered psychological counselling.

Earlier in the morning, the teachers had a sit-in outside waiting for the minister and her delegation for the meeting which had caused some confusion among parents who thought they were on strike and some went on to take their children away from school.

Head teacher Kathleen Samson said it was very unfortunate that some parents took it upon themselves to take away their students from school yesterday when in fact there was nothing happening at the school as the classes resumed after the meeting.

She said she was happy the meeting was positive and the teachers were satisfied with the outcome.

The teachers who talked to the media after the meeting said they were satisfied with the response of the minister and her delegation.

“Even though we take full responsibility of their children under our care, parents should know what their responsibilities are and also take greater responsibility when it comes to raising their children. Many are not doing so. It’s sad to see young children roaming around in the streets at odd hours half naked and it’s the parents of these children that most of the time will not cooperate with the teachers. Those parents should understand that we have to work together for the sake of their own children,” Rosana Vaccaro, a P1 teacher, said. 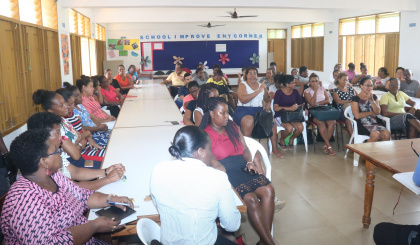