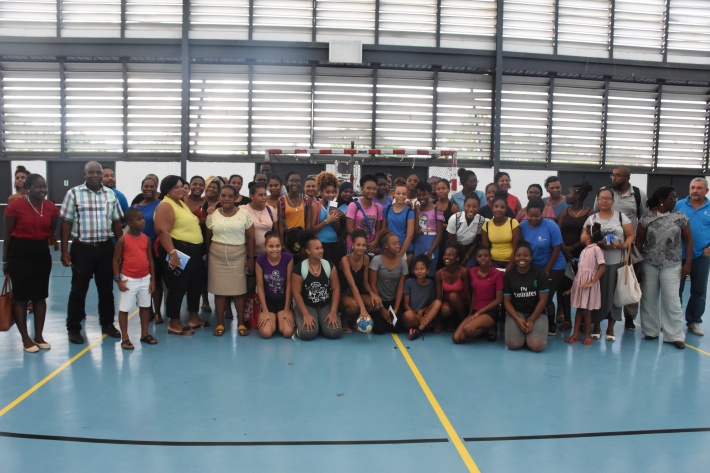 The young players with their parents, coaches and officials of the Seychelles Handball Federation

Seychelles will be represented at this year’s Africa Zone six of the International Handball Federation Trophy tournament which will take place from June 10-16 in Lusaka, Zambia by two young female selections.

The country is sending a youth team and a juniorselection who will compete in the under-17 and under-20 competitions.

Mary-Rose Sinon is the head of delegation, while Jacqueline Bastienne is the team manager.

Williana Dubois is the assistant coach, while Vicky Delpeche will be the medical person.

The tournament is being hosted by the International Handball Federation (IHF), in partnership with the Confederation of African Handball (CAHB) and the Handball Association of Zambia (HAZ).

The players from both selections received their plane tickets and uniform from chairman of the Seychelles Handball Federation (SHF) Norbert Dogley on Wednesday, during a gathering at the Palais des Sports in the presence of their parents.

Other than the presentation, the meeting was also the chance for Mr Dogley to reassure the parents on the safety of their children regarding the competition and all the other aspects attached to it, including accommodation and transport since the players are still young, with some still being minors.

Initially, South Africa had been granted the hosting rights and the tournament was scheduled for Johannesburg from April 28 to May 6, but due to protests, xenophobic attacks and political campaigns, the international mother bodies had to prioritise the safety of the athletes and later decided to bring it to Zambia.

Regarding the swap of host, secretary general of the HAZ Josab Changa said they are humbled and grateful that the international mother bodies have been able to recognise and appreciate that Zambia is a peaceful sporting nation capable of hosting international events due to her geographical location and historical background.
The tournament will see 10 countries, namely Malawi, Zimbabwe, Mozambique, Botswana, Lesotho, Swaziland, South Africa, Madagascar, Seychelles and the host Zambia, compete for the 2019 Zone-6 IHF Trophies.