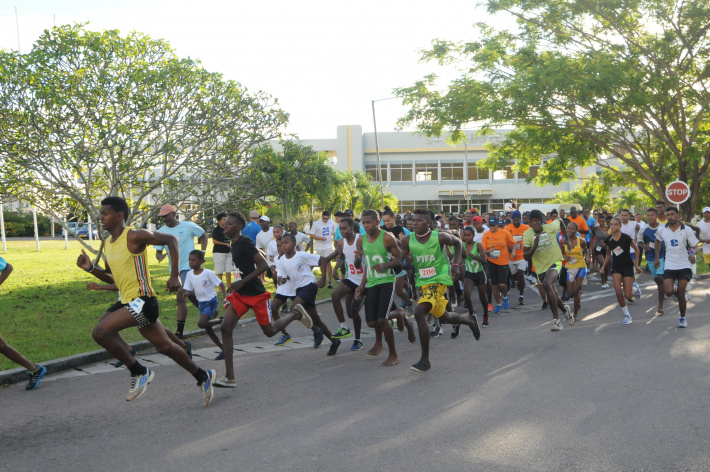 Do you want to be an advocate for peace? If yes, then run the Unity Relay as a show of solidarity.

This year’s Unity Relay has been slated for Saturday December 7 and the cash prize to be won is R10,000.

First initiated in 2009, the event has over the years become very popular with teams from various working intuitions, sports clubs, as well as schools taking part.

Teams who wish to take part must complete and return the entry forms together with the fees to: Unity Relay, Eco-Friendly Marathon, Annex Oceangate House, Victoria, latest Friday November 29, 2019,

Teams will comprise a maximum of 10 people for the top five teams of last year’s race and maximum 15 for others but each team must have at least two men or women. Each team should have its own vehicle, water and food and each team must provide an official. The official provided by one team, will board another team’s vehicle to avoid cheating. A team can have two vehicles if it wants but the official must be in the vehicle that is following the runner and must be in sight at all times. The team can also have its own medical or First Aid person.

A maximum of 50 teams will be able to take part in this year’s event and it will be a question of first come first served.

All members of a team will start the race together at Stad Linite except for runner number two who will be placed either at the 5km or 10km mark. It is compulsory for runner number one to run either 5km or 10km and in the case of the first runner running 5km then there must be another runner that runs the next 5km. This applies to the top 5 teams of the last race held in 2018.

The other runners can change any time except for the one running the Curio Road leg. One runner will run the section from St Louis chapel to the junction at Sans Soucis. No vehicles will be allowed on that sector.

The official on the vehicle will have to take note of the changes in runners and time run etc. and ensure that there is one official runner (identified by the wrist band) on the road at all times. To reach the finish line, all team members must join the last runner at the Moniman Linite roundabout to finish the last kilometer together inside Stad Popiler. The ‘official’ last runner can sprint and finish the race and then go back to meet the others.

The prizes are as follows:

Additional prizes of R1,000 will be awarded to the youngest and oldest teams (when the ages of all members are added together). There will also be five lottery prizes of R1,000 each for teams who have not won a prize but have completed the run.

The overall first team will also receive the roving trophy and all competitors will get a certificate and Eco-friendly T-shirt.

Each team will have to provide their own number or have a distinctive uniform with the number. Wrists bands which will be either rubber or plastic must be worn round the wrist. These will be provided by the organiser.

Competitors can either run or walk.

Apart from runner two and/or three and the one running from the St Louis Chapel, all others can walk or run any distance they want.