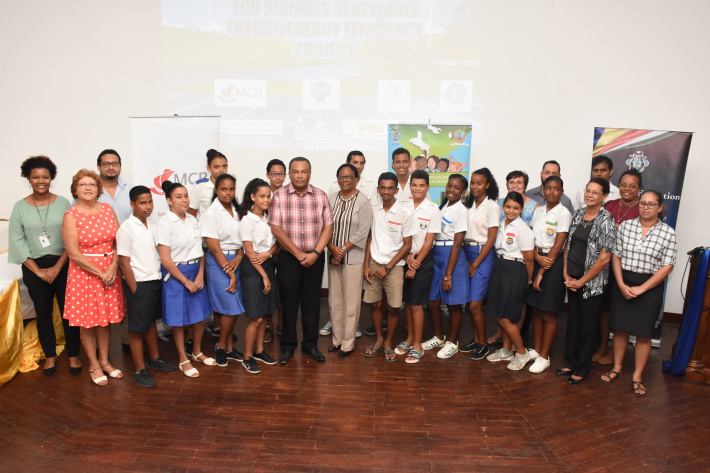 The winners in a souvenir photograph with guests

With the increasing effects of climate change several countries are trying to find ways to mitigate its impact or come up with adaptation solutions.

In April this year the Indian Ocean Commission launched the regional eco-school renewable energy efficiency project competition, an initiative of the foundation environmental education (FEE) that encourages young people to develop their knowledge by working in collaborative and proactive ways on ten themes that revolve around renewable energy sufficient project.

Schools who took part in the competition were rewarded yesterday afternoon in a ceremony in the auditorium of the Seychelles Institute of Teacher Education (SITE). The ceremony was attended by the Minister for Education and Human Resource Development Jeanne Simeon, the principal secretary for tertiary, primary and secondary education Dr Odile Decomarmond and the director general of secondary education, Odile Octave.

A total of seven projects were submitted by secondary schools which were then evaluated by a national committee comprising six judges. The four top-scoring judges were then selected and had to prepare a PowerPoint presentation explaining their projects.

The winning team was Anse Royale secondary school who then went on to represent Seychelles in the regional competition that was held in Mauritius in August 2019.

Their project was a solar power grass cutter that is quieter than the fuel powered ones currently in use at the moment.

“As a small island developing state, we are vulnerable to the effects of climate change and must do our utmost to assist the world in mitigating its impact. I am pleased that the students have designed projects that will be able to help tackle the issues of climate change,” said Ms Octave.

She went on to congratulate every student who took part in the competition and thanked all parents and teachers who helped the students when designing and presenting their projects.

Ms Octave ended by urging everyone to continue to support such projects and contribute to reducing your energy consumption by switching to more renewable sources of energy.

Schools who reached the finals were awarded first. They were Perseverance secondary who came out third, Beau Vallon took the second position and the first place went to Anse Royale secondary school as the national winner.

All schools were invited to design a maquette of their project which is on exhibit at the SITE cafeteria. This category was judged the same day as the ceremony. The winners were Anse Royale secondary who was placed third, Perseverance secondary took the second poistion and the first position went to Beau Vallon secondary.

Plaisance secondary school displayed their hydroponic system of farming titled ‘solar energy as renewable energy in deep culture technique-aquaponics system for the production of lettuce’ which is a method of growing plants in a water based, nutrient rich solution.

Hydroponics does not use soil, instead the root system is supported using an inert medium such as perlite, rockwool, clay pellets, peat moss, or vermiculite. The basic premise behind hydroponics is to allow the plants roots to come in direct contact with the nutrient solution, while also having access to oxygen, which is essential for proper growth.

Teeshe Pointe and Marielle Ntep, the masterminds behind the project, say that they plan to implement it at Perseverance school and later sell the produce grown through the system.