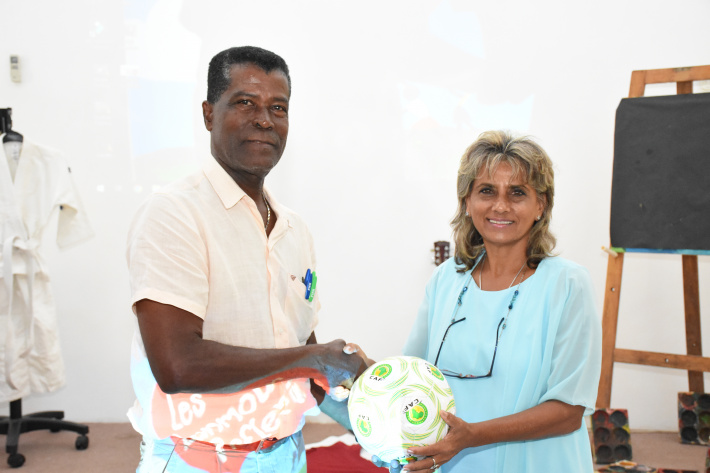 Mr Bibi hands over a football to Mrs Rene

Pupils of La Rosière and Mont Fleuri schools are set to benefit from the sports and art project initiated by the Campaign for Awareness, Resilience and Education in collaboration with the Ministry of Education and Human Resource Development after the project was officially launched yesterday morning at Care House, Victoria.

The project, which was piloted in Perseverance school from 2015 onwards with the sport component only, and which is still yielding positive results, aims to re-orient risky behaviour into positive behaviour by increasing the students’ resilience towards negative influences, including substance abuse and anti-social behaviour.

“We want every single child to excel so they can build a better tomorrow for themselves and the society in which we live. Every child is special and deserves to be treated and made to feel special, so we are urging all partners to collaborate with us on the project,” Mr Robert stated, urging parents to also support their children on the programme and to offer help to schools.

Mr Robert also unveiled the official logo for the project which comprises the Care logo, as well as four emblems including a karateka, football, clef and paintbrush. He noted that karate is a sport which requires discipline and helps to instill respect while football requires teamwork. The clef signifies the therapeutic impact that music can have on emotional health while the paintbrush is not only significant of the artworks that the students will produce, but also self-expression and the steps they are making towards their future.

Seychelles Football Federation chief executive Georges Bibi also presented Care chairperson Sarah Rene with a donation of footballs before a short video depicting the successes of the project at Persévérance primary school was aired to the invitees.

One of the pupils from Perseverance, Wayne Louis, who is now in secondary, noted that he opted to enroll in karate lessons and three years on, he continues to go from strength to strength in the sport. Through karate, he has represented Seychelles at international level numerous times.

Chairperson of Care, Sarah Rene then addressed all present and officially launched the project detailing the benefits that it can afford both students and parents.

She urged all parents and organisations to collaborate and work together towards the project noting the importance of their involvement towards ensuring the success of the project, which she described as “imperative” towards the holistic development of young persons.

“Children are created in the image of God and we could even go as far as saying that parents and teachers are mere babysitters guiding them through their young years until they become adults. It is important that we encourage and recognise good behaviour, no matter how small the progress they make and to encourage them to express themselves in a healthy manner,” said Mrs Rene.

“Teachers, parents, let us not think that we are better than children because we are more experienced in life but rather, let us take the opportunity to interact with our children and learn from them,” Mrs Rene stated, noting that many parents, have through the project formed a closer bond with their children.

Care intends to introduce the project in more schools in future and to increase the activities on offer to include swimming among others. 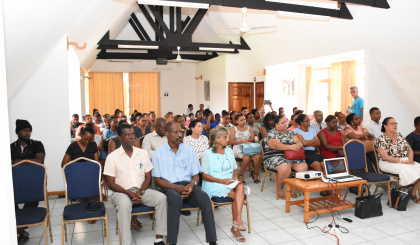 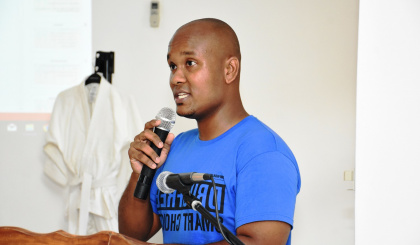