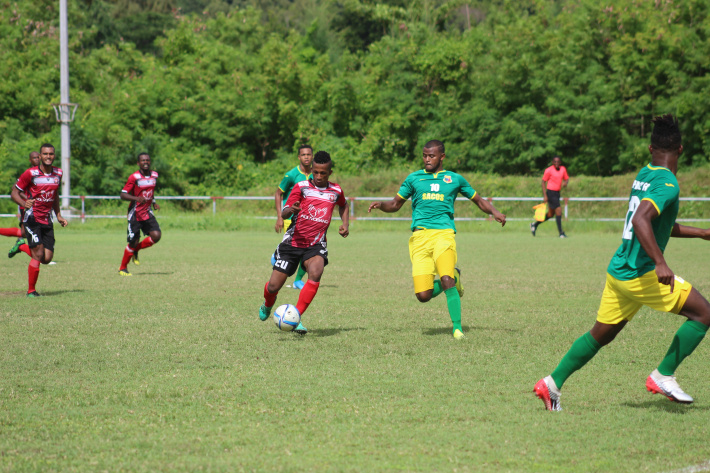 Reigning league champions Côte d’Or demolished Red Star Defence Forces 9-3 on Praslin on Saturday, while on La Digue, St Michel defeated La Passe 2-1. On Mahé on Friday, St Louis returned to winning ways with a 5-2 win over Revengers and on Praslin LightStars brushed aside Au Cap’s challenge in a 4-1 victory in a week where 35 goals were scored in the SeyPearl Premier League.

Four players got hat-trick in their teams’ wins – Seychellois Hubert Jean for St Louis on Saturday, Seychellois Martin Williams for Foresters on Thursday, Malagasy Paul Bruyelle of LightStars on Friday and Malagasy Kassah of Côte d’Or on Saturday.

Defending league champions Côte d’Or warmed up for their clash with Egyptian side AS Masry this Sunday in the Confederation of African Football (Caf) Confederation Cup with a whopping 9-3 demolition job on hapless Red Star Defence Forces on Saturday at Stad Amitié for the biggest win this season in the league.

Red Star Defence Forces started their own downfall as defender Gino Agathine scored in his own net to give Côte d’Or a 1-0 lead but Barry Marie and Darrel Damoo helped the army team to take the lead at 2-1 in this free-scoring encounter.

However, Malagasy Kassah and his countryman Jonas netted for the home team for a 3-2 score for the league champions at half-time.

Perry Monnaie scored after the break to make it 4-2 and Kassah added his second for a 5-2 lead before Monnaie scored again for a 6-2 score after which Kassah scored his third of the match to complete his hat-trick and make it 7-2.

Damoo bagged his second of the match for a 3-7 scoreline while Côte d’Or substitute, Ugandan Tony Kizito, came off the bench to grab a brace and ensure a 9-3 final score as Côte d’Or preserve their unbeaten run while Red Star Defence Forces’ woes continue with their fourth defeat in as many matches.

St Michel came from a goal down to end La Passe’s unbeaten run with a 2-1 win at the L’Union playing field on Saturday afternoon to take pole position in the league as they are unbeaten in four matches.

La Passe though started brightly in this match as they took the lead in the 13th minute from Malagasy Zeze’s cross which came off St Michel defender Yannick Manou and fell to Malagasy Florent who fired in a forest of legs to beat goalkeeper Alvin Michel and make it 1-0.

La Passe were in control and went close to increasing their lead in the 23rd minute from a brilliant free kick by Malagasy Rhino, who was celebrating his 22nd birthday, but the ball bounced back off the crossbar as St Michel rode their luck.

St Michel though raised their game and in the 24th minute, Julio Brown played a throw-in to Malagasy Hassan Aly who eluded a defender to shoot at goalkeeper Ian Ah-Kong who saved the danger.

St Michel drew level in the 37th minute as Rhino was overindulging with the ball just outside his penalty area and then lost the ball to Aly and fouled the St Michel playmaker to concede a free kick.

Aly lined up the ball and drilled it low and surprisingly goalkeeper Ah-Kong failed to reach the ball which hit the back of the net for a 1-1 score.

The goal spurred St Michel while their opponents seemed to lose their way and almost gave away a second goal in the 41st minute when Malagasy Oliver Livakely spread the ball to the unmarked Norris Bibi who was in a good scoring position but he fluffed the chance to leave the score at 1-1 at half-time.

La Passe tried to get back into the match after the interval and in the 52nd minute, Florent played a clever back heel to the overlapping Adrian Constance who flashed the ball across the St Michel goalmouth where goalkeeper Michel could only parry to Jules Constance but he blazed the ball over the crossbar.

La Passe suffered a setback when Rhino had to be replaced through injury in the 53rd minute and in came Tanzanian Benson Gideon Brown.

St Michel grew in ascendancy in this half though and in the 64th minute Livakely floated a free kick into the La Passe penalty area and the ball came off the hand of Gideon Brown forcing referee Emile Fred to point to the penalty spot.

Livakely took responsibility of the spot kick and thumped the ball into the bottom corner to make it 2-1 for his team.

La Passe pushed more players forward and in the 83rd minute, substitute Marcus Labiche fired at goalkeeper Michel who was equal to the task.

In the 91st minute, Florent latched onto a long ball and held off two defenders but could not lob the advancing goalkeeper Michel who smothered the ball.

La Passe had another gilt-edge opportunity in the dying seconds from an inswinging free kick by Gedeon Brown which rolled agonisingly across the St Michel goalmouth and Florent failed to connect at the far post as St Michel survived to win this top-of-the-table clash to go top of the league and club secretary Michael Delpeche was relieved his team managed to overcome their opponents in this tough test.

“We knew it was going to be a difficult match but after a slow start where we were a bit under pressure, the players did well to come back and dominate the second half as they were attentive to the advice of the coaches to help us to a good win away from home,” Delpeche told Sports NATION.

As for La Passe coach Bruno Saindini, he was not happy with the way his team crumbled after a good start in this six-pointer battle.

“We started well but then slackened and gave away some soft goals so I’m quite disappointed but we will have to regroup and try to bounce back in our next match,” the La Passe coach said.

St Louis had to come from a goal behind to beat Praslin outfit Revengers 5-2 at Stad Linite on Friday afternoon.

The players of coach Neddy Rose stunned the home team as they took the lead in the 11th minute thanks to Malagasy striker Marthelin to make it 1-0.

St Louis levelled the score in the 37th minute through Hubert Jean for a 1-1 score and the former Victoria City flying winger made it 2-1 in the 40th minute.

Jean rounded off his hat-trick a minute into the second half for a 3-1 score but St Louis then wasted numerous opportunities to increase the score.

Revengers reduced the arrears in the 75th though very controversially when Ryan Antat’s shot hit defender and captain Bertrand Esther’s arm outside the penalty area but referee Emile pointed to the penalty spot and Antat scored past goalkeeper Michel to make it 2-3.

St Louis though rallied with two late goals. Substitute Juninho Mathiot headed powerfully past goalkeeper Melanie Gerick Vidot’s corner kick in the 84th minute for a 4-2 score and Vidot himself scored with a header in added time from Jude Nancy’s corner to give St Louis a much-needed victory of 5-2 after suffering two defeats in their previous two matches and their manager Davis Khan was happy his team had bounced back.

“We started slowly but created many chances in the second half and we are pleased to get back to winning ways,” manager Khan told Sports NATION.

As for Revengers coach Neddy Rose he was generally satisfied with his team’s performance against one of the top clubs locally.

“It was not a bad showing though we could have taken the chances we created, but I have seen an improvement in our level of play,” Revengers coach Rose said.

Praslin side LightStars had to come from behind at half-time to brush aside the challenge of Au Cap in a 4-1 triumph at Stad Amitié on Friday afternoon.

Au Cap had taken the lead through Ghanaian midfielder Emmanuel Armah for a 1-0 score at the interval.

LightStars though got their acts together in the second period where Malagasy striker Paul Bruyelle netted a hat-trick and Renick Esther also scored for a 4-1 final score.

Northern Dynamo were held to a 0-0 draw by La Digue club Anse Reunion at Stad Linite on Saturday.