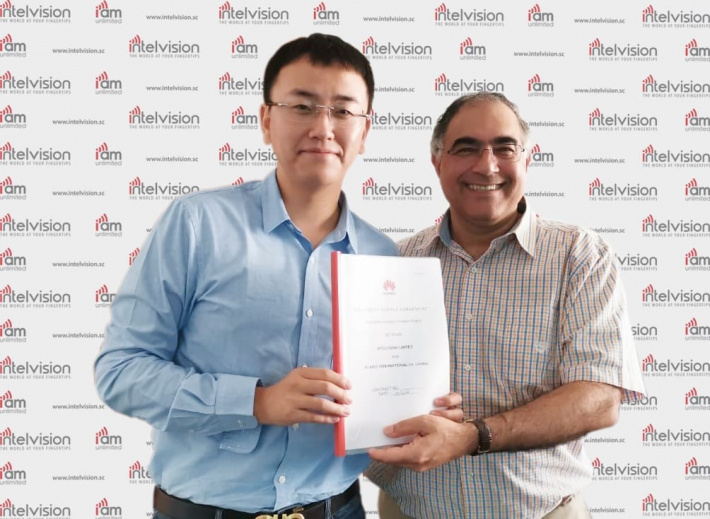 Mr Valabhji and the managing director of Huawei with the signed agreement (Photo source: Intelvision)

Intelvision is synonymous with internet services and cable television but that looks set to change as the company recently announced that it will as from next year roll out its 5G mobile network.

The grand announcement was made as the company celebrated its 15th anniversary recently where founder of Intelvision, Mukesh Valabhji, emphasised the need to keep innovating in order to remain current and set the organisation apart from competitors, while also being mindful of the needs and demands of the local market.

In an interview with Seychelles NATION, Mr Valabhji noted that Intelvision has been working on the mobile network for almost one year and everything looks set for roll-out in June 2020.

To start off, the company intends to launch 4.5G followed by 5G.5G networks are the next generation of mobile internet connectivity, offering faster speeds and more reliable connections on smartphones and other devices than ever before. Combining cutting-edge network technology, 5G should offer connections that are multitudes faster than current connections, with average download speeds of around 1GBps expected to soon be the norm.

According to Mr Valabhji, currently, voice networks in Seychelles are 2G networks on account that 50 percent of the population do not own a smart phone. However, 2G technology is considered old and obsolete in some countries as next-generation wireless network technologies have emerged and afford considerable improvements for users, although the company will also cater to the 2G market.

While 5G networks are considered the grand innovation of this season, mobile handsets equipped with such technologies are limited on the market and still unaffordable to most average technology consumers. Mr Valabhji noted that as such devices become more accessible and offer consumers usability, Intelvision will roll out its 5G network across the inner islands, being facilitated through Chinese telecommunications giant Huawei, a company who has been the subject of much controversy in recent months.

“We will have 95 percent coverage of Seychelles – Mahé, Praslin, La Digue – and all the inner islands on 4.5G. What is available in Seychelles today, 4G is only about 50 percent coverage, so we are aiming at a much higher coverage. 5G we are deploying in June 2020 in town, north Mahé and the airport and then slowly expand throughout the country over the next 12-18 months after that,” Mr Valabhji stated.

Despite the controversy surrounding tech giant Huawei, the company is considered to be among the most advanced in 4.5G and 5G technology.

“For Seychelles what is more important than the technology is the after-service. Huawei has over 200 technicians based in Mauritius and many more in South Africa and if there is a problem, someone can be here within 24 hours. And that’s the agreement we have with them. They are on call and it is a turnkey project so they will do everything from start to finish until they hand over the whole system to us,” he noted.

He added that the company will also have two full redundancies to cater for failures and technical faults. Effectively, Intelvision will be running two networks, unlike its competitors.

The mobile network is expected to cost US $25 million with a further US $25 million investment in its own submarine cable. Investment in its own submarine cable will also give the company a competitive advantage which can be passed onto consumers. In terms of pricing for 4.5G and 5G network services, Mr Valabhji noted that prices should be similar for both networks promising to be “more competitive than what is available on the market,” although Intelvision embraces competition.

Currently, Intelvision is the only internet service provider to have unlimited internet packages. According to Mr Valabhji, the company holds 65 percent share of the residential internet users market.

For the 50 percent of the population who do not yet own a smart phone, Mr Valabhji revealed that the company is working on a plan to “convert” them towards smartphones.

“I think it will revolutionise the way people use their mobile. We’ve got lots of things that we will launch eventually that you can use your mobile for. The idea is in the next three or four years, everything you do will be on your mobile,” Mr Valabhji noted.

He further noted that Intelvision is aiming to ease the adoption of emerging technologies and services such as mobile payments in future provided partners such as the banking sector collaborate with them.