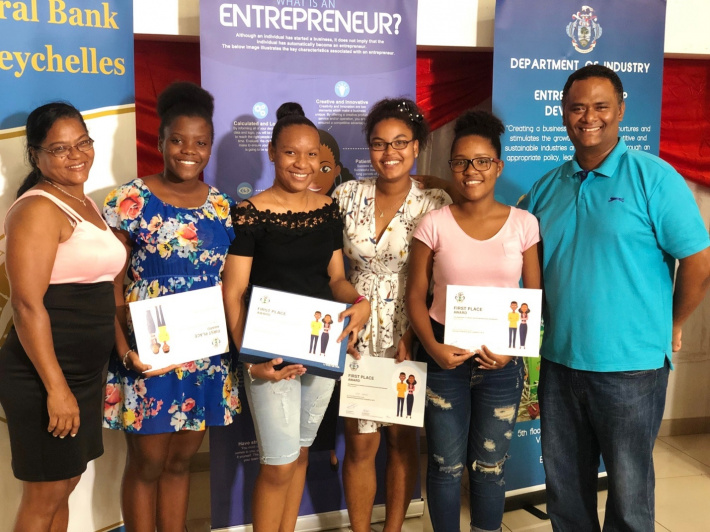 « Biznes le Fitir » a concept well received by the youth

Winners of a Schools Entrepreneurship Competition for primary, secondary and post-secondary levels have been rewarded.

The competition was organised by the department of Industry and Entrepreneurship Development in collaboration with the Ministry of Education, the department responsible for Youth, and the Seychelles National Youth Council.

The winners for the primary level are: First prize - Daniel Zialor from La Retraite school. He drew an island-to-island SPTC train system; second place - Etana Pointe from Bel Eau school who drew a restaurant below the sea with sleeping facility and the third prize went to Ravin Camille from Bel Eau school who drew an ‘out of the ordinary’ shaped museum under the Seychelles sea.

For primary level, students were asked to submit drawings, posters, paintings and illustrations demonstrating “Biznes le Fitir” or “Future Businesses”. Sixty-eight drawings were received from seven primary schools and participants were judged on the following criteria by officers of the department of Industry and Entrepreneurship Development: whether the drawing or painting is visually understandable; whether the artwork engages the viewer; whether there is a business aspect in the drawing; whether the business within the drawing is innovative /creative, and whether the drawing has added value to it (colour and content).

The winners for the secondary level are: First place went to Pointe Larue secondary school consisting of Shania Joseph, Elza Cedras, Georgia Ernesta and Zoe Michel where they sold healthy smoothies made from local fruits.

For secondary level, students were to pitch their business idea to a panel of judges which could make maximum returns on R500. This level was done in two stages: Elimination round and final round where students were not allowed to buy and sell; the business idea had to be innovative/creative; and sponsored walk or sponsors were not allowed. For the elimination round, six groups from four schools participated (3 groups from Anse Royale secondary school, 1 group from Pointe Larue, 1 group from Praslin and 1 group from Perseverance).

The winners for the post-secondary level are: First place went to Seychelles Institute for Agriculture and Horticulture (SIAH). They created a “ready to sell” jam made from none other than coconut. The team consisted of Tahira Appasamy, Shamira Chang-Waye and Craig Edmond.

The second place went to Seychelles Business Studies Academy (SBSA). They presented a labour and post labour hospital powered by renewable energy. The team consisted of Samia Brioche, Kelly King and Lee Sabadin and the third place went to two winners: Seychelles Business Studies Academy (SBSA) and SIAH. The team of SBSA consisted of Jeff Barbe, Steve Monnaie, and Manisha Assari and they made an electric bus system to present to the judges. The team of SIAH consisted of Fredo Dubel, Kelvin Nancy and Jamila Marie. They portrayed a biogas facility to the judges.

For post-secondary level, students were to present an innovative or creative business idea to a panel of judges which can solve at least a Sustainable Development Goal (SDG). Additionally, they had to use their marketing and communication skills to produce a commercial that would convince the viewers that their future product or service is the solution to their problem. There was no elimination round for this level. 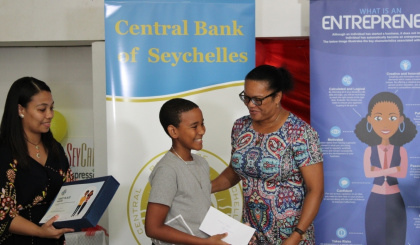 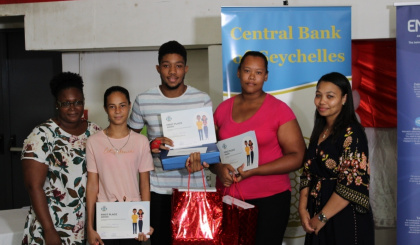