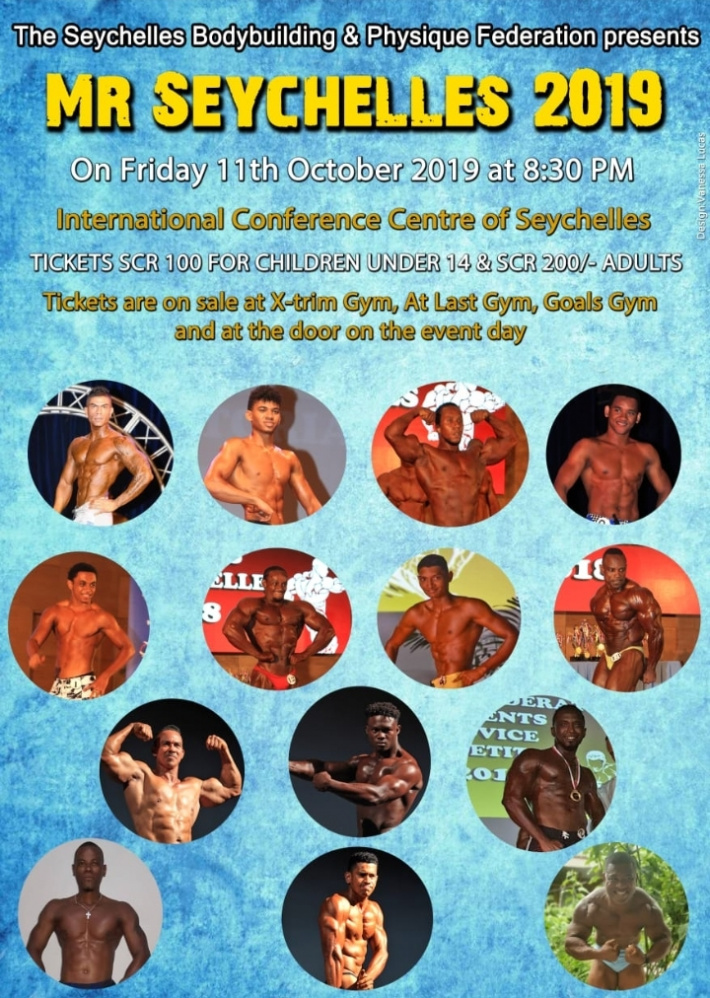 In the absence of elite poser Ziad Al Adou Mekdachi who now holds an International Federation of Bodybuilders (IFBB) pro card, a new athlete will be crowned Mr Seychelles during this year’s contest which will take place on Saturday October 11 at the international Conference Centre Seychelles.

Hosted by the Seychelles Bodybuilding and Physique Association (SBPA), so far six posers have confirmed their involvement in the senior bodybuilding contest, along with five who will compete in the junior physique, while another four will be posing in the senior physique competition.

Due to the low number of posers the bodybuilding competition will be open and in the line-up will be some popular figures in the likes of veteran Joelen Valentin, Fabien Antat, Rodney Henriette, Mervyn Dugasse, Andy Anthony and Ricky Gertrude.

As for the junior physique line-up, it will be without defending champion Darnel Hoareau, the son of ex-bodybuilder Jacques-Alain Hoareau, who has not been able to prepare for the competition due to school commitment.

Present on the night will be Deje Laure, Raj Kowlessur, Hendricko Vidot, Shane Dodin and bodybuilder Ryan Bastienne who has joined the group due to a lack of junior bodybuilders.

Tickets for the event are already on sale at R200 for adults and R100 for kids under 14 years old.

At last year’s bodybuilding competition, Dugasse, who also won the best bodybuilder award for 2018, finished second overall, ahead of Henriette and Anthony who were third and fourth respectively.

IFBB elite pro Mekdachi is the country’s most decorated athlete when it comes to the Mr Seychelles title, winning six in the last 10 years.

The break-up started a rivalry between the two bodybuilding camps and denied the SBBA bodybuilders the chance to compete in the Mr Seychelles organised by the SBPF.

Despite a request to the National Sports Council (NSC) to host the Mr Seychelles contest, the council made it clear that it was not meddling in the affairs of the two bodybuilding bodies and it is best they unite to be recognised by the local sports authority.

The NSC also made it clear that it had no mandate to organise competitions at competitive level because it is not a member of and is not recognised by any international sports federation.

The council, however, recognised the SBPF and gave the body headed by Mohan Chetty a budget and also the mandate to hold meetings with the SBBA in 2011 to try to solve the conflict and come up with just one bodybuilding body.

In the absence of the IFBB posers, Nano Camille who was affiliated with the SBPF, won a brace, precisely in 2010 and 2011.

The SBPF, however, did not honour the agreement and failed to organise enough competitions.

As a result, it did not receive a budget from the NSC in 2012 and none of its bodybuilders qualified for the Sports Awards of the Year crowning ceremony.

The Mr Seychelles contest failed to take place in that year and it was also obvious the level of competition and quality of athletes had declined.

In 2013, after a disastrous season the year prior, a caretaker committee was set up and it was led by Ted Sauzier who tried to remedy the situation and bring the sport, especially the prestigious Mr Seychelles contest, back to its feet.

Other than Mr Sauzier, the committee was also made up of Barnsley Antat as the secretary and Justin Ernest as the treasurer. The other members were Golbert Nicette, Franky Cedras, Mike Etienne and a representative from the NSC.

The committee managed to host the competition in 2013, where Mekdachi won another title.

Early in 2014, former top Seychelles bodybuilder Regis Delorié was elected to chair the new Seychelles Bodybuilding Federation (SBBF) and once again, the event was back on the sporting calendar where Mekdachi won and he went on to claim the titles again in 2015 and 2016.

History, however, repeated itself in 2017 when Delorié stepped down due to lack of support, leaving the sport stranded once again.

The only highlight of 2017 for Seychelles’ bodybuilding was the involvement of posers Anthony and Mekdachi at the Mr Olympia Amateur held in Mirabella, Spain.

Mekdachi finished 10th out of 18 contestants in the -100kg category, while Anthony was 7th overall in the -75kg group which featured nine posers.

Both bodybuilders finished as the best for Africa in their respective categories.

The Mr Seychelles contest was back on the scene last year after Kishnan Louise took over the SBPA chairmanship and promised to reinstate the event on the national calendar of events.

Once again, it was Mekdachi who came out first, finishing ahead of Mervyn Dugasse, bringing his tally to six titles.

Winners of the Mr Seychelles contest over the past 10 years