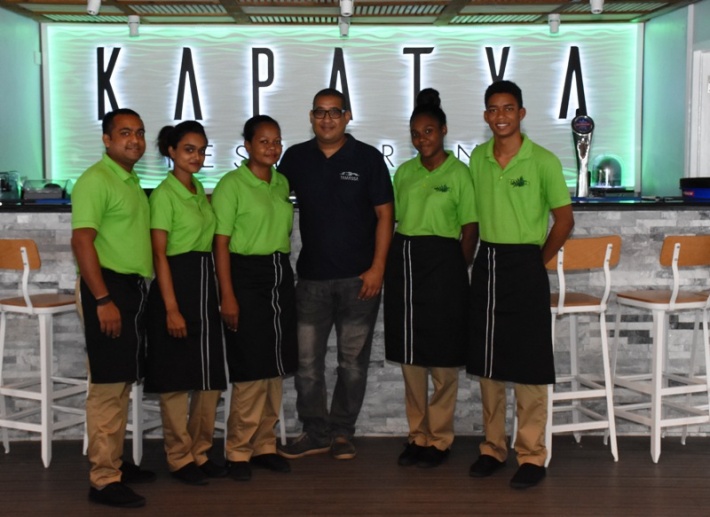 Mr Chan with some of his employees

Kapatya, the latest addition to a list of restaurants at Anse à la Mouche, recently opened its doors to offer locals and visitors alike more choices, more variety and taste of different cuisines.

Mathew Chan is the manager of the new and trendy eating outlet ideally located just opposite the beach on the southwest coast of Mahé.

“The idea was to find a Creole name for the restaurant and I believe Kapatya is well suited,” Mr Chan noted.

He said in due course the kapatya, a convenient carrier bag made of green coconut leaves widely used by our elders once upon a time, will be painted on the walls to form part of the décor.

The Kapatya Restaurant opens every day at 7.30am for breakfast until 11am when it caters for lunch. The restaurant does not close during the day but remains at the service of anyone who walks in until late in the evening for dinner.

For the time being it closes on Mondays but Mr Chan said in three months’ time it will open seven days a week.

The restaurant provides a range of cuisines for all lovers of good food.

“Both visitors and locals to our restaurant will not be disappointed as we specialise in different cuisines from around the world,” said Mr Chan.

At present the restaurant is focusing only on à la carte menus including pizzas but Mr Chan said upon demand they can provide for buffets and other special requests from clients.

Mr Chan affirmed that prices at the Kapatya Restaurant are very competitive and affordable and everyone is invited to discover what the restaurant has to offer.

“We have invested a lot and need to make a profit but we ensure that our prices are affordable and not exorbitant. Competition is tough so we have to bear that in mind,” he pointed out.

Asked why the idea to open a restaurant in this particular area with two others namely Lobster Bay and Anchor Café only a stone’s throw away, Mr Chan said there is a demand for more variety and thus a wider variety for clients to choose from.

With a wealth of experience in the restaurant business – being a shareholder in the Tamassa Restaurant, the owner of Moloko and having managed a restaurant in the south region before, Mr Chan is well placed to know what visitors and locals really want.

“So far without much publicity since opening recently, the response is very good because we just open our doors and people drop in,” Mr Chan added.

More on the issue of competition Mr Chan said it is good for business and the important thing is to know what you are doing and not to be scared.

The restaurant is run by a team of 17 employees of whom 70% is Seychellois and 30% foreigner.

Mr Chan said he would have preferred his whole team to be Seychellois but the fact is there are not enough trained Seychellois to take up these positions.

“There are just not enough trained Seychellois to meet the increasing demand for trained manpower for small establishments like ours to compete with large hotels and other similar businesses,” Mr Chan said, noting that there are also many of those trained who choose to change their field of work after completing their tourism courses.

Satisfied with the team operating the restaurant, Mr Chan said they are still getting use to their work and are receiving additional training to boost their skills as the restaurant gradually builds up its clientele.

The restaurant also sources its fresh produce as much as possible from the community to complement what it has to buy from the supermarkets. 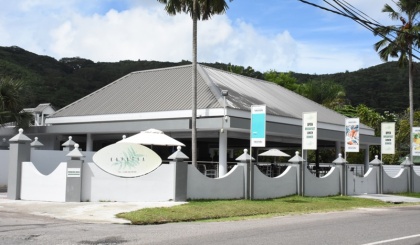 The new restaurant viewed from the outside 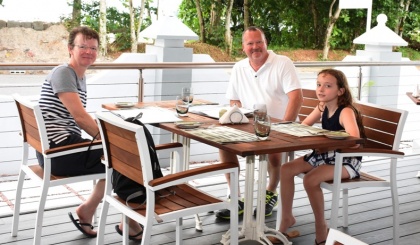 A family waiting to be served 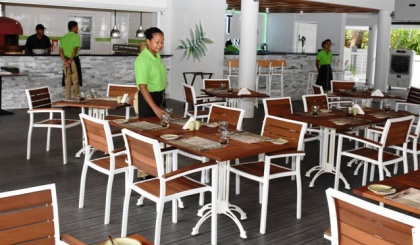