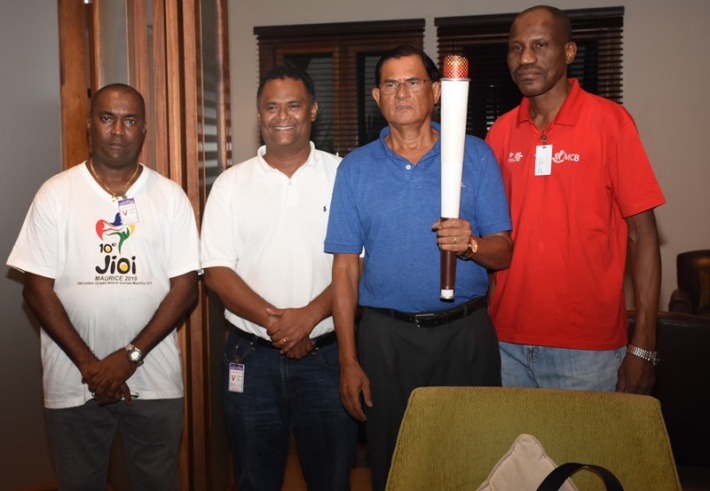 Mr Gopal holds the IOIG torch in the presence of Messrs Palmyre, Larue and Alcindor

Seychelles is the first country to host the torch of the 10th Indian Ocean Island Games for the traditional relay round all the participating countries, prior to the Games, scheduled to take place in Mauritius from July 19-28.

The torch arrived in the country on Saturday night from Reunion who hosted the last Games in 2015 and it was the president of Seychelles Olympic and Commonwealth Games Association (Socga) Antonio Gopal, who is also the president of the Conseil International des Jeux (Cij) who brought home the torch.

Present at the airport to welcome one of the most significant elements of the Games were principal secretary for youth and sports Fabian Palmyre who is also the chairperson of the National Sports Technical Committee which is overseeing the athletes’ preparations for the Games, chief executive of the National Sports Council (NSC) Jean Larue and the secretary general of Socga Alain Alcindor.

The traditional torch relay will begin today with a ceremony at Stad Linite, before the torch heads to the southern part of Mahé, stopping at different schools along the way.

The torch will be carried by school athletes only.

Tomorrow, the IOIG torch will travel round the northern part of Mahé, before stopping in front of the Mauritius Commercial Bank (MCB) in Victoria where there will be some animations by students from various schools of the central region.

The torch will then head to Praslin and La Digue on Wednesday, before leaving on Thursday.

As the president of Cij, Mr Gopal had the chance to visit some of the sporting infrastructure in Mauritius and he is very satisfied with the progress of the work being carried out on all the competition sites.

Very optimistic, he believes that everything will be ready on time for the Games.

Mr Gopal added that he is also very impressed with the Côte d'Or sports complex, which he says has the level required to host international competitions such as the Commonwealth Games.