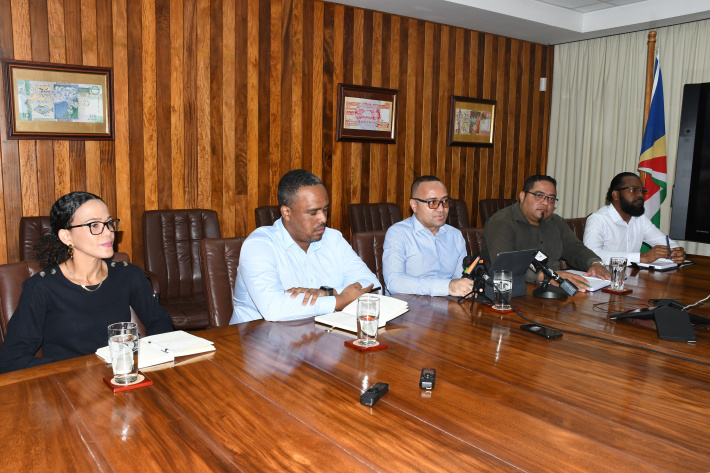 The National Anti-Money Laundering (AML) and Countering the Financing of Terrorism (CFT) Committee (NAC) has said the national risk assessment focusing on non-profit organisations, vulnerable to terrorism financing, is still ongoing and is appealing for their engagement for the completion of the assessment by April this year.

The appeal for the over 200 non-profit organisations (NPOs) to engage in the second phase of the survey which is to start before the end of this month, was made by the chairperson of the committee and also the Secretary of State in the Ministry of Finance, National Planning and Trade Patrick Payet. This was during a press conference held in the boardroom of the Central Bank of Seychelles (CBS), Victoria, yesterday morning.

SS Payet stated that it was on July 4, 2022 that the government launched the comprehensive national risk assessment (NRA) analysis for the NPO sector, intended to identify NPOs which may be at risk of terrorist financing that may affect the country’s reputation internationally.

He explained that significant works have been undertaken since to identify all NPOs in the country among other relevant information collected.

The survey, a recommendation of the global money laundering and terrorist financing watchdog ‒ the Financial Action Task Force (FATF) ‒ will be confidential and will be conducted with the assistance of Ceps.

One of its 40 recommendations requires that countries take a risk-based approach to the supervision of the NPO sector, and our country is currently non-compliant with this recommendation.

“This is another exercise that we are launching this year with the assistance of Ceps and so we are appealing to the NPO sector to engage in that process so that we can collect as much information to enable us to complete the national risk assessment of the NPO sector,” SS Payet said.

SS Payet added that the completion of the NAR analysis for the NPO sector will help yield the most comprehensive understanding of the country’s risk of terrorist financing represented by the sector and hence permitting the government to design effective and efficient policies, strategies and action plans in response.

It will allow for enhancement of our country’s Anti-Money Laundering and Countering the Financing of Terrorism (AML/CFT) framework to further defend our status and the integrity of our financial sector on the international scene, including locally, as a state, non affiliated to terrorism activities hence to prevent being blacklisted, especially by the European Union.

He urged NPOs that will be contacted to give real and correct information on their financing activities and sources of financing to help government put in place strategies to safeguard the sector.

Mr Laurence, for his part, said Ceps’ registered members and other NPOs not affiliated, have an obligation to participate in the exercise so that the authorities concerned can advise them if the activities they are indulging in are putting the country and Ceps at risk or not.

He added that given that NPOs rely on local and international donors for funding, among which some might have bad intentions and which they (NPOs) could innocently themselves participate in illegal activities without knowing, their participation in the exercise will allow them to demonstrate transparency in the use of those funds.

“The exercise will allow all local and international legitimate financial organisations to see that their money is being put to good use and that will further guarantee more funding to NPOs to further serve the community, including that of their own existence and for Ceps also,” said Mr Laurence, who noted that NPOs that do not participate in the survey will be subjected to investigation of their financial transactions.

“The intention is to assist the NPOs found to be at risk and to work with them so that they are not seen as a financial avenue by terrorists for terrorism activities which at times can happen unintentionally,” Mr Rampal said.

For her part, Mrs Pierre said while the Office of the Registrar, as the registering body, ensures that NPOs operate within the legal framework, it will seek to encourage NPOs to participate in the survey to mitigate the risk of terrorism financing, including money laundering, especially among the vulnerable organisations that are mostly at risk.