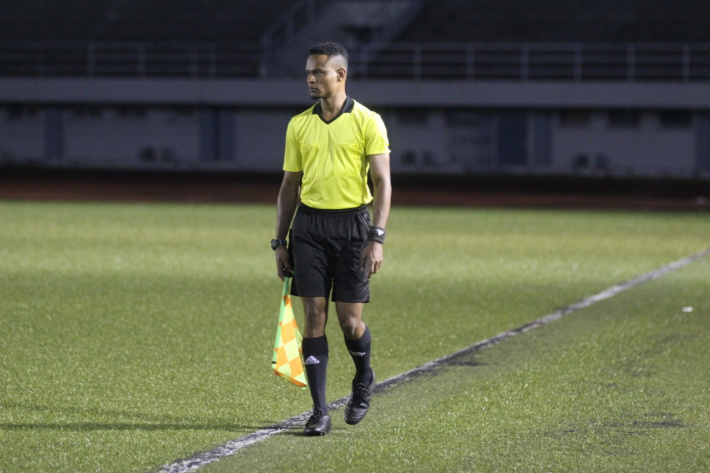 Assistant referee Padayachy out to win a spot in final group

Young Seychellois Shaji Padayachy is among the 23 assistant referees who have made it to the pre-selection list for the forthcoming TotalEnergies Under-20 Africa Cup of Nations 2023 finals to be played in Egypt.

The referees and assistant referees will undergo a preparatory course in Cairo from February 13-18 following their arrivals on February 12.

According to Caf head of refereeing and football technology Noumandiez Désiré Doué, the referees and assistant referees will undergo physical and theoretical tests and practical training during the course.

He said unsuccessful candidates will return home and they or their football associations will bear all related costs.

The final list of referees/assistant referees appointed to the finals will be published on February 17.

“Preparations for the tournament intensified last week after I received news that I feature in the pre-selection. I have been doing physical training with coach Joseph Adam, while Jason Damoo and Jean-Claude Labrosse are concentrating on helping me improve my techniques,” Padayachy told Sports NATION yesterday.

The 24-year-old, who received his Fédération internationale de Football Association (Fifa) referee’s badge in February last year, added: “I will be going into the preparatory course fully aware that I want to be along the party in Egypt. Therefore, it is up to me to work hard and pass all three tests ‒ medical, physical and theory.”

Since receiving his Fifa badge, Padayachy has officiated seven matches ‒ Angola v Namibia in the Africa Cup of Nations (CAN 2023) Under-23 qualifiers which also qualifies for the Olympic Games of Paris2024; 2023 Africa Cup of Nations (Afcon) preliminary round qualifier between Mauritius and Sao Tome and Principe; Caf Confederation Cup match between Royal AM (South Africa) and Mbabane Highlanders FC (Swaziland); as well as four games at the Council of Southern Africa Football Associations (Cosafa) Cup (two group matches, one quarterfinal and a semifinal).

Padayachy started as a football official when he was in secondary one (S1) at the time and did mainly school games. He gradually climbed up the ranks and in 2014 he graduated as an assistant referee and started officiating first division matches locally.

He would like to thank his workplace ‒ the Financial Services Authority (FSA) ‒ for releasing him for the tournament and other international duties.

The 12 teams have been drawn into three groups of four. Group A is made up of hosts Egypt, Mozambique, Senegal and Nigeria. They will play at the Cairo International Stadium.

Uganda, Central African Republic, South Sudan and Congo make up group B to be contested at the Suez Canal Stadium in Ismailia.

Group C is composed of Gambia, Tunisia, Benin and Zambia and all matches will be played at the Alexandria Stadium.

The 12-nation tournament will begin with a mouth-watering opening game between hosts Egypt and Mozambique on Sunday February 19, 2023.