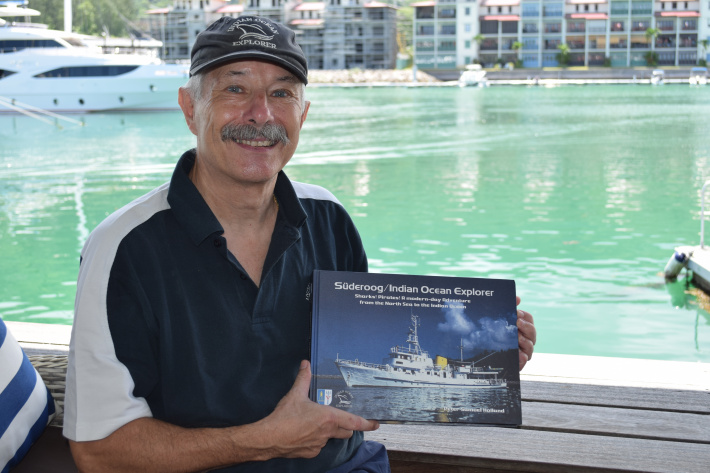 Captain Holland with a copy of the book

A new book authored by Captain Peter Holland recounting the journey of the iconic Indian Ocean Explorer vessel is set to hit the shelves at local bookstores soon.

The 296-page hardback book includes a collection of some 1000 photographs, and depicts the story of the boat from launch, to what was its end in 2009, when it was sunk some 53 years after its launch.

Many Seychellois will have fond memories of the boat, having been part of the crew when it was converted into a diving live-aboard yacht in 1998, offering diving, fly fishing and research expeditions in the outer islands of Seychelles, and the Indian Ocean at large. However, for others, the name is synonymous with one of the darkest chapters of Seychelles’ maritime history, characterised by the scourge of piracy.

The ship was on March 27, 2009, hijacked by Somali pirates in the southern waters of the Seychelles with a seven-strong Seychellois crew onboard. While the crew were freed in June 2009, the ship was set on fire and sunk off the coast of Somalia by the pirates.

“I wrote the book because there are a lot of incredible stories around the boat,” Captain Holland noted.

The book comprises numerous chapters detailing each stage of the boat’s life cycle, although the bulk of it is focused on its operations within the Seychelles, and the many adventures it witnessed and experienced during that era. Captain Holland noted that two-thirds of the pictures featured are from Seychelles, or of the Seychellois crew.

The collection of stories include visits to the Chagos islands, when the vessel was caught up in Madagascar and had to be freed by American forces, as well as archaeological expeditions to Mozambique.

Asides from its adventures and those of the crew, the book also makes reference to the Seychelles of the time, prior to the historic liberalisation of the economy and exchange regime in 2008, and under the rule of the late former President France Albert Rene, and his successor James Michel. It also details the friendship and bond which developed between the two captains.

The book is the result of around a year-and-a-half of research and work, which saw Captain Holland travelling to Hamburg, and interaction with former captains and staff.

Having been crucial to the boat’s operation in Seychelles, the book is dedicated to Captain Francis Roucou, who was also a significant contributor towards the final version.

Thus far 300 copies have been produced in Singapore, and are already in the country.

The Indian Ocean Explorer from birth

The boat which would eventually be renamed the Indian Ocean Explorer was the first oceanographic boat built after World War II in Germany in 1956. It, then named SUDEROGD, started research, mainly surveying in the Northern and Baltic Sea until 1972.

The ship was at the time the most modern survey vessel in the world, equipped with advanced positioning equipment, a wreckage detector and even an echo sounder. Over the years in service, it was continuously upgraded, until its decommissioning 34 years later, in November 1990.

From 1991, the ship operated as a support vessel for oil platforms in the Netherlands, until 1994 when she was acquired by a small Germany-based travel agency, before being put up for sale in 1997.

“I was one of the owners initially who brought the boat to Seychelles in 1997, and I was with the boat for twelve years just before I sold it, just three months before the boat was caught by the pirates,” Captain Holland told Seychelles NATION.

In 2003, Captain Holland became the sole owner of the boat, and proudly operated with a fully-Seychellois crew, with the ship under the command of Captain Roucou who had assumed the position since January 2009. The ship was at the time one of the first to start the fly-fishing operation in Astove and Cosmoledo in addition to diving, over two seasons, one spanning from March to May, and the other from mid-September to November.

Captain Holland was at the time residing in Switzerland, and was on a full-time basis engaged in advisory services for a pharmaceutical company under the wing of one of the leading global accounting firms, Deloitte.

As well as eleven crew members, the boat could accommodate 14 guests at the time.

With the political and economic landscape of the time, one of the major challenges the crew and management faced was logistics. At some point, they imported commodities which they would need for the cruises themselves, in a bid to avoid the shortages on the local market.

For both the captains, one of their most memorable moments from the years at sea together was when they nearly lost the boat. Captain Holland recalled that Captain Roucou was on relief at the time, and while another captain had taken over the first trip of the season. While repairing the broken compressor, the captain left the bridge, causing the boat to drift about 100 metres inwards on the reef. The crew tried to salvage the boat, and it wasn’t until the arrival of Captain Roucou by airplane, and after two long days and nights of hard preparatory work did they manage to get it back at sea.

Captain Holland sold to a French millionaire towards the beginning of 2009, a few mere months before the hijacking.

“I knew every screw on this boat, and when it was sunk, I felt really, really bad. I personally would not believe it for some time,” Captain Holland added.

The boat is still an underwater wreck. 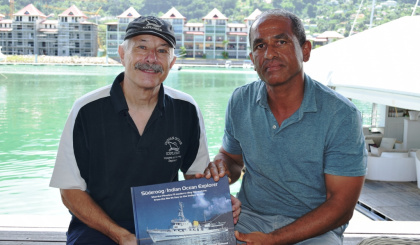 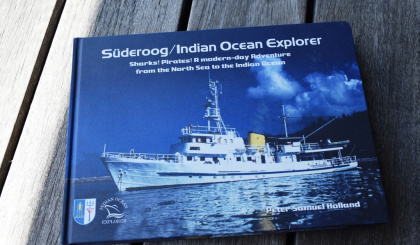 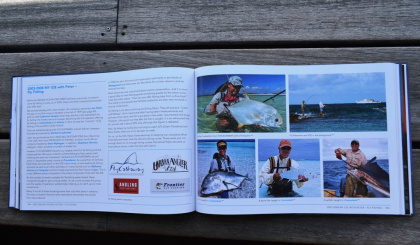