His name is Neil Azemia and please don’t confuse him with his elder brother Ned Azemia who is by now an established track and field athlete and competing professionally.

Neil is ready to make a name for himself and on Saturday he shattered the male junior 8km (4 laps) record despite a low turnout in the first races of the cross-country series.

Only 11 runners turned up at the fitness trail, Roche Caïman on Saturday afternoon to take part in the firstraces organised by the Seychelles Athletics Federation to open the 2023 track and field season.

The 17-year-old was surprised when yours in writing informed him that he had broken the record.

“I did not know that I had broken the record and did not expect it. I went into the race as a warm-up for the new season, but I am super proud I did it,” Azemia told Sports NATION in a telephone conversation.

Three competitors registered for the female masters (over-40) 6km (3 laps) race which was won by Florise Ernesta in 36:09.6.

Mariella Buisson failed to complete the distance, while Deepa Jivan did not take the start.

Meanwhile the second cross-country races have been set for Saturday January 21, 2023, starting at 3pm at the fitness trail, Roche Caiman.

As for the third and final cross-country races, they will take place on Saturday January 28, 2023 starting at the same time and at the same venue.

The races are open for individuals, groups, companies, secondary schools and post-secondary institutions. All those who would like to take part are asked to register with Fabien Belle on 2517406, the SAF office at Stad Popiler by calling 4225958 or any athletics coach after 3pm at Stad Popiler.

Mariella Buisson (Did not finish) 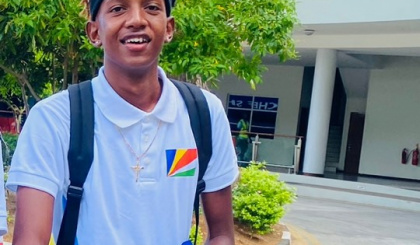