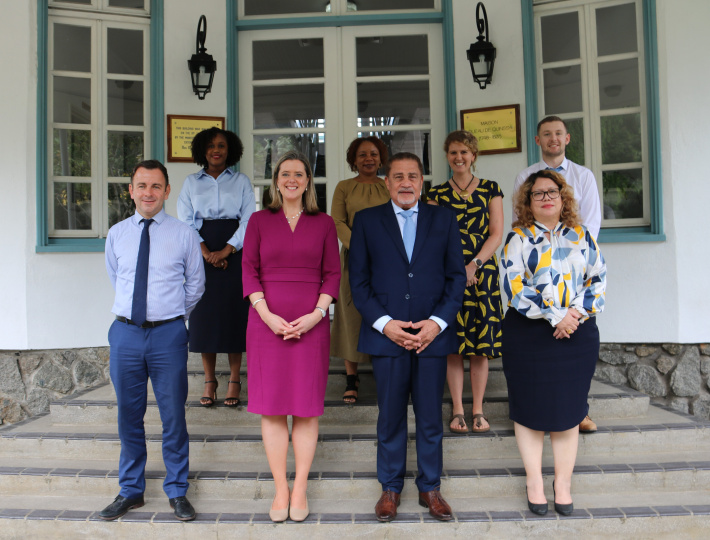 A souvenir photograph after the call. Ms Robertson is second from left, front row

DG for Africa, Latin America and the Caribbean calls on Minister Radegonde

The director general for Africa, Latin America and the Caribbean at the Foreign, Commonwealth and Development Office, Corin Robertson, paid a courtesy call on the Minister for Foreign Affairs and Tourism, Sylvestre Radegonde, on Thursday January 12, 2023 at Maison Quéau de Quinssy.

Minister Radegonde welcomed Ms Robertson to Seychelles and expressed his appreciation for the support that the United Kingdom (UK) has given to Seychelles throughout the years, particularly in the field of education, maritime security and tourism.

“We are good partners as we agree on core issues that are of mutual importance and work together to achieving them. Seychelles is committed to seeing our relation continue to grow,” he added.

The minister also elaborated on the fact that as a small island state, Seychelles is not immune to the effects of climate change and remains dedicated to further advocate for climate change to remain central in discussions across diverse multilateral platforms. With the United

Kingdom’s support for the implementation of a Multidimensional Vulnerability Index (MVI), Seychelles will be able to have financial opportunities to build its resilience by gaining access to concessional finance.

On her part, Ms Robertson explained that the democratic principles demonstrated by Seychelles on the international arena and its stance on anti-corruption has been greatly admired.

“Furthermore, the UK is aware of the challenges Seychelles faces and the work being done to overcome the effects of climate change. Caribbean countries face similar issues so the UK is keen to support and push the agenda for the MVI,” said Ms Robertson.

Both parties agreed that they can further expand cooperation in the fields of eco-tourism, identifying alternative sources of energy, food security, the Blue Economy and maritime security.