Cocaine and crack growing in popularity in Seychelles |06 January 2023 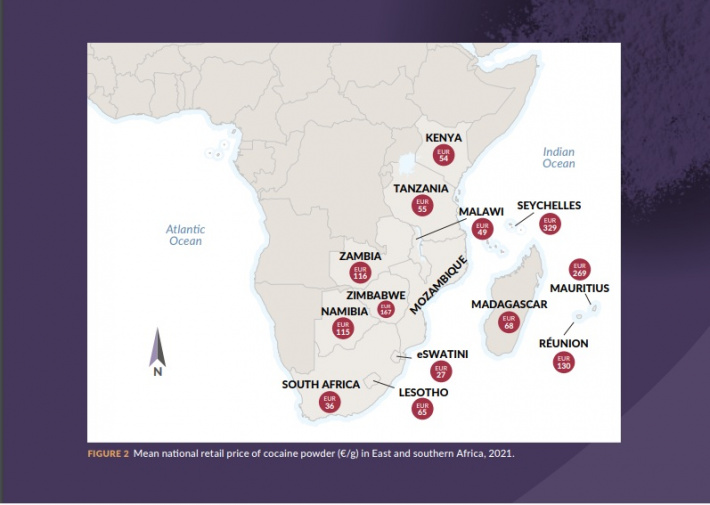 A recently published report, based on findings in sixteen East and Southern African countries, reveals that cocaine powder is most expensive in Seychelles at a mean national retail price of Euro (€)329 per gram, and that trafficking of the drug has increased in popularity since 2019.

The report entitled ‘A powder storm; the cocaine markets of East and Southern Africa’ was published in December by the Global Initiative against Transnational Organised Crime.

Despite cocaine having a significantly smaller market than heroin in Seychelles, the report highlights the “notable growth in the production and use of crack cocaine” with the drug becoming more widely available in the domestic market owing mainly to its greater profitability as compared to heroin, for which prices have declined in Seychelles in recent years.

While powder-form cocaine is hydrochloride (HCL) salt, crack cocaine is generally made by combining HCL with water and sodium bicarbonate. The presence of crack cocaine in a domestic market is often a sign that there is a stable supply of cocaine powder.

As is the case for other countries in the region, it is thought that Brazil is the primary point of origin for cocaine entering the small but lucrative Seychelles market, with the Bole International Airport in Addis Ababa being a significant transit point.

Kenya, a popular country for the landing and onward transnational transport of cocaine is a “significant micro-trafficking point for the distribution of cocaine by air and sea to the Indian Ocean Island states of Comoros, Madagascar, Mauritius and the Seychelles”.

In fact, in neighbouring island states the mean retail price of cocaine powder, as derived from field research is much lower than Seychelles. The price per gram is at €269 in Mauritius, €130 in Reunion, and even lower at €68 in Madagascar. It was confirmed that crack cocaine is available in Mauritius, but no data is available for the other two Indian Ocean counterparts.

Mauritius is according to the report not considered a major consumer destination, or a major transit market, with use limited in scope and isolated to the wealthier communities among the population. It is reportedly primarily imported by air, while smaller amounts are imported by post. The largest cocaine bust occurred in July 2019, when 90k kilograms was found concealed in a recently imported excavator.

Meanwhile, the local drug market of French Overseas Territory of Mayotte is dominated by heroin and synthetic cannabinoids, and the island is also categorised as not being a major consumer destination or transit market for cocaine trafficked through the region. Counterpart Reunion has seen an increase in the availability and use of cocaine since 2015, prompting the supply chain to respond.

The report concludes that cocaine is widely available and used across the region, and that the limited presence of cocaine seizures is not an accurate reflection of the state of cocaine flows to and through the region.

As such, there is a risk that soon Madagascar will become a regional trans-shipment hub for cocaine and other illicit cargo.

Additionally, the Global Initiative against Transnational Organised Crime notes that the regional cocaine markets are being sustained by dysfunctional governments and institutional complicity and corruption. It reports that the trade is empowered by the collusion of state agencies, corruption and state capture, and fuelled by law enforcement incapacity, incompetence and, in some cases, indifference.

The report further highlights the vulnerability of these African territories where most national governments lack adequate capacity to generate the data to monitor and understand drug markets in their jurisdictions, diminishing their ability to design and implement an evidence-based response to the structures and characteristics of their illicit drug markets.

Despite the region being regarded as being a predominantly cannabis consuming region, with some established demand for opiates, particularly heroin, and a geographically limited demand for synthetics such as methamphetamine, as the “countries become more prominent as transit points for cocaine, the use of the drug in their local markets increases”.