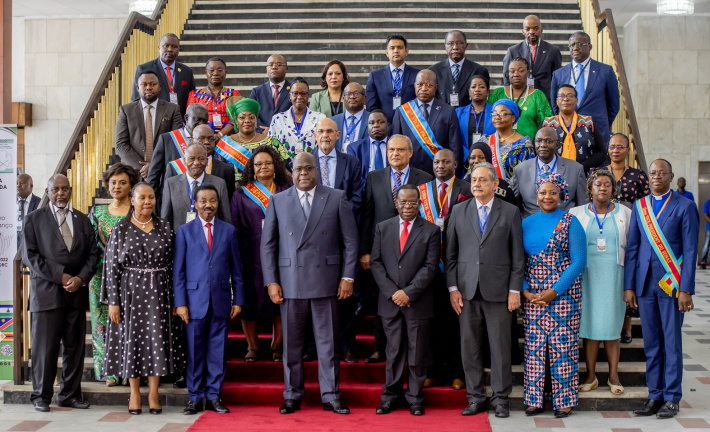 UNITED: The President of the DRC, His Excellency Félix Antoine TshisekediTshilombo (front row 4th from left) poses for a souvenir photograph with SADC PF Secretary General Ms Boemo Sekgoma (front row 2nd from left), Speaker of the National Assembly of the

The 52nd Plenary Assembly Session of the SADC Parliamentary Forum took place in Kinshasa recently with the Democratic Republic of Congo (DRC) imploring SADC member states to help end instability in the eastern part of the country.

The DRC says instability in the country over the years has claimed the lives of at least six million people, displaced countless others including women and children, and thwarted socio-economic development in the resource-rich country.

Officially opening the Plenary, the President of the DRC, His Excellency Félix Antoine Tshisekedi Tshilombo, spoke on the need to address the situation and requested the immediate and unconditional withdrawal from the DRC of insurgents in line with “the stated will of the African Union founding fathers” based on the inviolability of national borders.

Said Tshisekedi: “In defending our cause, we welcome the support that we are getting from sister African countries and, in particular, from those in the Southern Africa Development Community. On more than one occasion, this support has been witnessed to us and I hope that, at the end of these meetings, the Plenary Assembly of your Forum will provide us with renewed support.”

He said the DRC was striving for lasting peace and permanent cessation of invasion by national and foreign armed groups. He urged the SADC Region’s national parliaments, under the coordination of the SADC PF, to put in place “legislative frameworks that ensure the advent of lasting peace and security in the SADC region”.

Earlier, the Speaker of the National Assembly of the DRC, Honorable Christophe Mboso N’kodia Pwanga who is also President of the SADC Parliamentary Forum, said his country had suffered “genocide and massacres” resulting in serious humanitarian challenges.

The National Assembly of the DRC hosted the Plenary under the theme: ‘The role of parliaments in strengthening legislative frameworks for peace and security in the SADC region’.

The DRC leader who is the current chairperson of SADC, said the theme was appropriate and timely. He backed efforts to transform the SADC PF into a SADC Regional Parliament and challenged MPs to help their countries deal with food crises, the economic recession caused by the advent of the Covid-19 pandemic as well as the Ukraine-Russia war whose effects were being felt by citizens in the region.

Tshisekedi noted that food insecurity was a major challenge that required collective responses of all SADC countries.

“I am convinced that pooling our public policies as part of a real effective and sustainable economic integration will enable us to avert this scourge of food insecurity in the whole region … through relevant public policies,” he said.

Speaking at the same occasion, SADC PF secretary general Ms Boemo Sekgoma said the Plenary of the Forum was a pivotal event which celebrates parliamentarism and its core values for positive socio-economic change.

“At a time like this, we recognise that representative democracy complements the capitalist economic order and ensures that government remains accountable towards citizens to regulate enterprises and businesses,” she said.

Sekgoma said representative democracy through universal suffrage, leads to efficient checks and balances by a sovereign Parliament within the context of clear separation of powers.

“In this regard, parliamentarism also means that we leverage on representative democracy to embrace change and advance the regional socio-economic agenda of leaving no one behind, and no country behind. It also means that parliaments must continue to find avenues for all human rights to be respected for the citizenry, without discrimination,” she said.

Sekgoma noted that the 52nd Plenary of SADC PF was coinciding with 16 Days of Activism to End Gender Based Violence. In that regard, she said the protection of human rights, including the prohibition of GBV, would continue to be prioritised by the Forum, as it seeks to domesticate the Model Law on Gender based Violence.

She said in developing model laws, norms and standards, as well as other reference material in various areas of regional concern, the SADC PF had provided a basis for member parliaments and the citizens of SADC, to enhance democracy and ensure good governance.

“Initiatives conducted by the Forum have gone a long way in raising the bar for the legal and administrative standards which communities and constituents in the SADC region expect to be implemented in their respective jurisdictions,” she said.

Additionally, she said, the Forum had “incentivised national Parliaments to accelerate legislative progress by bringing the changes that citizens want to see”.

She expressed optimism that deeper inter-parliamentary integration achieved through the Forum’s change-making initiatives, would assist the SADC region to realise its targets under the SADC Regional Indicative Strategic Development Plan (RISDP) 2020-2030 and Africa Agenda 2063, among others.

The Plenary, which ended on December 10, 2022, drew delegates from Angola; Botswana; Democratic Republic of Congo (host); the Kingdom of Eswatini; Malawi; Mauritius; Mozambique; Namibia; Seychelles; South Africa; United Republic of Tanzania; Zambia and Zimbabwe. Delegates include Speakers and Clerks of National Parliaments. Lesotho and Madagascar tendered apologies and did not attend.

The Plenary is the highest decision-making body of the SADC PF, an inter-parliamentary body bringing together 15 National Parliaments.

From Moses Magadza in Democratic Republic of Congo