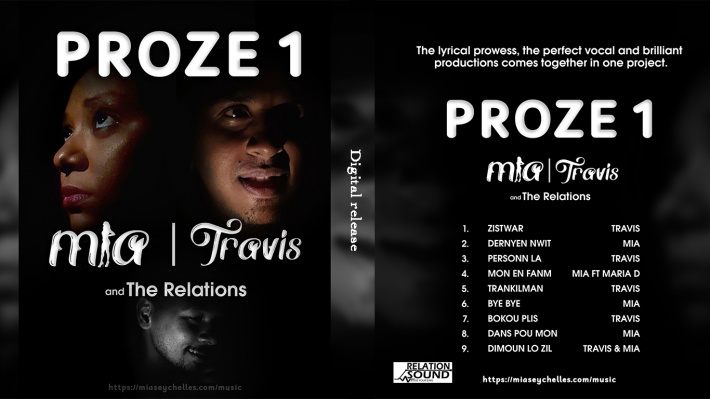 The front and back covers of the new album PROZE 1

Mia and Travis, two of Seychelles’ hottest artists on the scene, have released their newly anticipated album titled PROZE 1.

The nine-track album is a collaboration between the two artists whereby Travis has four songs, with Mia singing four and one duet by the two of them. It was produced and published by Relation Sound Production.

The album marks Mia’s second album following her 2018 debut album released alongside The Relations Band entitled PREZAN, which was met with universal acclaim from fans and received three award nominations for Takamaka Music Award and took home the award for ‘Best Female Artist’ of 2018.

“My albums are inspired by relationships (not specifically romantic), current affairs, world events and patriotism. I do not limit myself and always leave creative space for development while I am actually in studio recording the final vocals. A song for me is never done until the final mastering print has been sent for final processes,” says Travis.

“As with all of Travis’ and my own album from the Relations, we always like to experiment with different genres and mixtures of sound so it will be different from what others are doing here and to create our own kind of style,” Mia adds.

“We wanted to do a bit more of dance music for me, which would get fans moving and also to empower more women to be strong and proud of who they are. Especially women who have been through so much struggle and difficulties in life,” says Mia.

On his part Travis says that PROZE 1 is a commercial album that allows Mia and him to explore what they can contribute to the local commercial music scene, in other words “songs that are easier to understand and dance to”.

He further explains that PROZE 1 is another lyrically interesting album with some of Eddy Telemaque's (Director/ Sound Engineer Relation Sound Production) most ingenious production techniques.

Describing it as “one of the quickest albums to turn around”, Travis says PROZE 1 which was in the works for eight months is a unique album “as it is not something you will hear from other young artists locally”.

“A few songs took weeks, some took days, but Trankilman and Bokou plis which are two tracks on the album took 2 years before it met its final version,” says Travis.

Both artists have described the album as a fusion of reggae tone, blues, dancehall and reggae.

“My favourite songs on the album are Zistwar and Bokou plis which is sung by Travis and Dernyen Nwit by myself,” states Mia.

“I would not say favourite song, but easy repeat listening would go to Trankilman. Firstly its genre is bluesy and vocals are raw!! So you really feel what I’m singing about. And the topic! I have been pulled over by a person talking about how Trankilman is so good and the way I talk to the characters in this song,” says Travis.

He adds that Trankilman applies to so many layers of egotistical and power hungry characters that it relates to whoever you see fit.

“I laughed when I told Eddy (Telemaque) that ‘before you start lighting pitch forks and joining any hunt with Trankilman as your sound track... remember someone might be singing a line of this song with you in mind... so tread lightly’!!”

The album is available online and the reasoning behind it is to provide listeners with an innovative way of getting music.

“As most people would be playing from digitally via USB or digital devices, this also allows us to truly give the audience better quality rather than studio quality with minimum loss of quality,” concludes Travis.

PROZE 1 can be purchased online via miaseychelles.com . And it will soon be available on other globally recognised music distribution platforms.