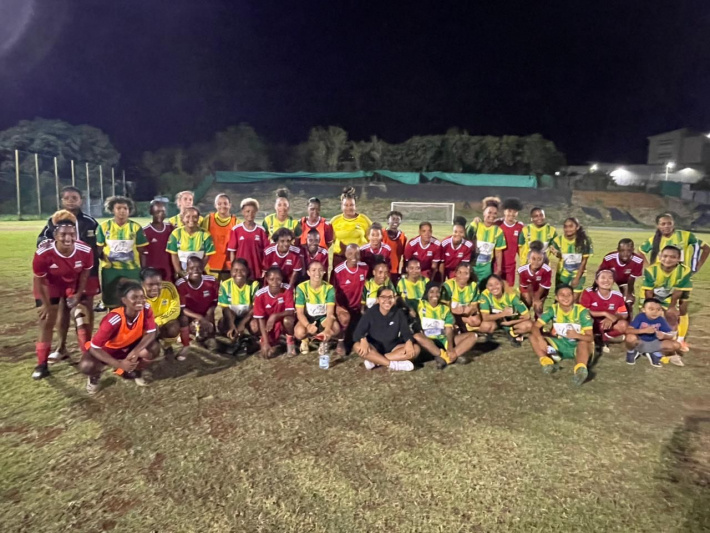 A family photo after one of the matches

The Seychelles women’s national football team have ended their impressive tour of Reunion island, winning two, drawing one and losing the other of their four matches played.

They returned home on Sunday after a 10-day tour and training camp which formed part of preparation for next year’s Indian Ocean Islands Games to be held in Madagascar.

The team were made up of a mixture of young under 15, under 19 and more seasoned players. The women’s national team head coach Angeline Chua said she was happy with the results achieved.

“We need to continuously rejuvenate the team and I am happy that the younger players are settling in well, giving us hope for the future,” she added.

The second match against Saint Paul was much tougher. Seychelles were leading 1-0 through a Pascalina Moustache strike until the final five minutes when a lapse of concentration allowed Saint Pauloise to pull level. The match ended 1-1.

Analysing the defeat, coach Chua said the Reunionnais were technically better, especially at set pieces, faster and they had a very good goalkeeper.

In fact only one of the five goals was scored during open play. Two came from freekicks, one from the spot, and the other from a corner kick.

“I believe the main difference between them and us is that they are technically superior and better organised. These are things we can work on,” said coach Chua.

She added that Madagascar, which most of the time are an unknown quantity, will also be part of the equation at the IOIG. “We have to consider them as well.”

Seychelles complete their four-match tour with a 2-1 victory over CS Saint Denis. Reena Esther and Gyra Boniface scored for Seychelles.

The Seychelles Football Federation has thanked the LRF for making the trip possible.