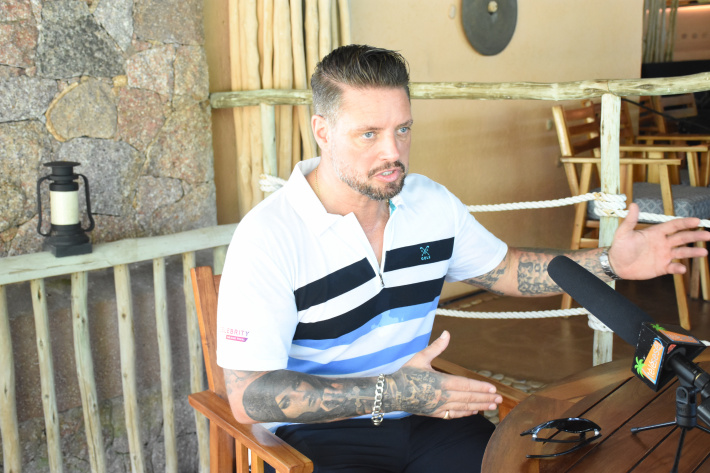 Launched in Mauritius last year, the golf Legends Tour Celebrity Series has reached our shores, where once again, a group of celebrities will compete for a prize fund of £100k that will be donated to a charity of their choice.

At the inaugural tournament, it was Keith Duffy who beat seven stars from the world of sport, media, entertainment and business to win the Celebrity Series Grand Final.

The event which starts today will take place alongside the MCB Tour Championship at the Lemuria Golf Course on Praslin and will gather 10 celebrities, including defending champion Duffy who will battle alongside professional players from around the globe.

Georgie Bingham is a well-renowned British radio and television presenter who is currently the TV host for the Legends Tour highlights show on Sky; while Robbie Fowler, also known as ‘God’ by Liverpool supporters, is a former professional footballer most commonly known for the integral role he played with Liverpool and England.

Dan Walker is a television presenter, newsreader, sports commentator, and English journalist most commonly known for presenting Football Focus, BBC Breakfast, BBC Radio 5 and Match of the Day. Sir Andrew Strauss OBE is a South African-born English cricket administrator and former player, formerly the director of cricket for the England and Wales Cricket Board who played county cricket for Middlesex, and captained the England national team in all formats of the game. Defending champion Duffy is an Irish singer, radio and television presenter and is mostly known for being part of the Irish boy band Boyzone, who won the inaugural Legends Tour Celebrity Series Grand Final in Mauritius with 35 points, beating Fowler by a single point and claiming £27,000 for his chosen charity of AsIAm.ie is also among the golfers. Duffy will also be taking part in the Autism awareness activities that will be held on Mahe alongside the golf events.

Franz Klammer is a former champion alpine ski racer from Austria who  dominated the downhill event for four consecutive World Cup seasons, and  gold medallist at the 1976 Winter Olympics in Innsbruck, winning the downhill at Patscherkofel by a margin of 0.33 seconds with a time of 1:45.73 will also be swinging his clubs at the Lemuria Golf Course.

champion with eight wins. Barry Richards is a former South African first-class cricketer and considered one of South Africa's most successful batsmen.

Last, but not least, and most probably the most commonly-known pair locally among the contenders are Italians Roberto Di Matteo and Gianfranco Zola.

He moved to English side Chelsea, where he was voted the Football writers Player of the Year in the 1996-1997 season. During his time at Chelsea, he won the UEFA Cup Winners Cup, the UEFA Super Cup, two FA Cups, the League Cup, and the Community Shield, and in 2003, he was voted Chelsea's greatest player ever.

He was capped 35 times by Italy from his debut in 1991, appearing at the 1994 World Cup, where Italy finished in second place.

Speaking to Sports NATION, the only women competitor and television presenter Bingham said she is excited to compete alongside ex-sportsmen since they never lose their sense of competition and are very combative.

She added that even if she is not expected to win, she is up for the challenge.

As for Zola, he said by being here, everyone has already won, as they are getting some funds for their respective charities, but individually, he will be all out to try to win.

He said his charity he will be playing to help fight Multiple sclerosis (MS) which is a progressive disease of the nervous system.

Zola said his fund will go towards a research centre in Milan, Italy which is presently carrying out multiple researches regarding the issue.
Defending champions Duffy said not being a sportsman will be of huge advantage to him since the other competitors will be putting so much pressure on themselves since they have been competitive people all throughout their careers.

This, he said, will take the pressure off him, allowing him to be more fluid in his game.

As for charity, he is representing children and families affected by autism, since he himself has a daughter who suffers from autism.

He explained that diagnosis should be made as early as possible so that intervention and access to the necessary care and services required for the children with autism.

Director general for destination marketing within the tourism department, Bernadette Willemin noted that it is a great honour for Seychelles to be part of the MCB Tour Championships again this year.

“We are absolutely delighted to host such a beautiful line-up of celebrities playing on our shore for the Celebrity Series Grand Final event.  We hope that our beautiful pristine settings will inspire them in their mission to raise awareness and make a difference in the lives of many people through the important causes they will represent,” she added. 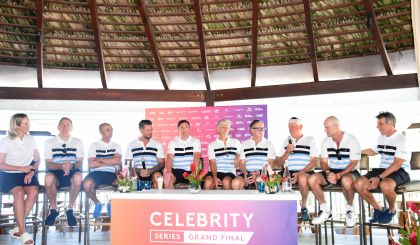 The celebrities during their meeting with the press yesterday (Photo: Roland Duval) 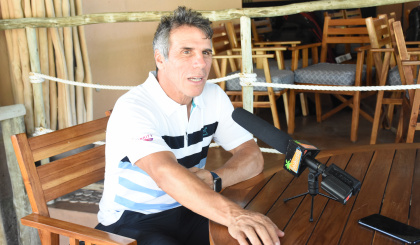