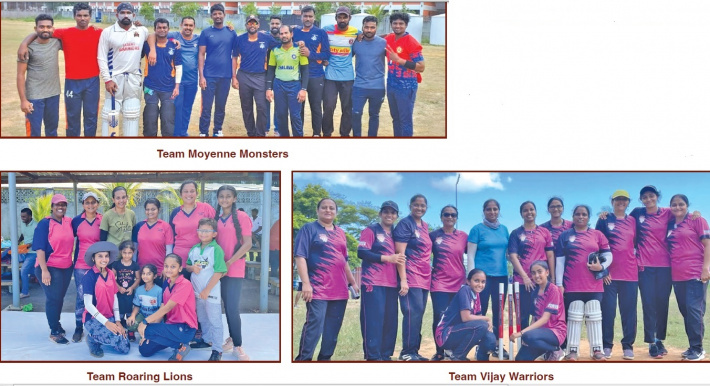 The Seychelles Cricket Association initiated the new tournament which will exhibit the longest format of limited over cricket called one-day format, where each team will play a maximum of 50 overs each.

To begin with, four teams have been selected and named in tribute to the beautiful islands of Seychelles.

The Inaugural match of the SCA 50-50 championship 2022-23 was played at the Persévérance ground between Desroches Super stars and Moyenne Monsters.

Winning the toss, Desroches opted to bat. Despite losing their wickets in regular interval, opening batsman Gokul Kannan (40) and tail ender Saidul (28) stabilised the innings for Desroches and set up a score of 157/10 at the 32nd over. Bowlers Nagarajan (3 wickets), Mugilan (2 wickets) and Sachin Kunder (2 wickets) were among the best for Moyenne.

Upon chasing the target despite of a good start by Vijayan and Selva, Moyenne lost their wickets at a regular interval as Praveen of Desroches removed 6 wickets.

Despite a short cameo by skipper Deepak Radhakrishnan 28 (18) Moyenne lost the match by 14 runs, scoring a maximum of 143/10.

Pravin of Desroches was selected as player-of-the-match for his bowling performance.

In the second match of the Seychelles Cricket Association’s 50-50 Challenge 2022-2023 played on Sunday at the Persévérance cricket ground, Moyenne Monsters beat Silhouette Blasters by 6 wickets.

Winning the toss, Silhouette Blasters captain Govind Kerai opted to bat first. Moyenne Monsters’ bowlers were striking hard from the beginning, removing the Silhouette batsmen for cheap runs. But a steady 61-run partnership between Ashok (67) and Kaushal Patel (19) helped Silhouette set up a target of 110 runs, losing all the 10 wickets.

Manish made a five-wicket haul, while Sachin (2 wickets), Sanjo (2 wickets) and Deepak (1 wicket) to help to collapse the Silhouette batters.

Manish of Moyenne Monsters was selected as the player-of-the-match for his bowling performance.

Meanwhile, the second semifinal of SCA T10 league saw GSP7 A win against Lakstars on Saturday November 12 at the Persévérance field.

Amal of Lakstars grabbed 2 wickets. But the bowlers of GSP7 A restricted Lakstars to a maximum score of 73/7 at the end of 10 overs. Suranga (20) and Kavinda (14) of Lakstars were best among their batsmen. Sachin Kunder (2 wickets) and Kothamdam (2 wiskets) were among the best for GSP 7 A.

Sachin Kunder was player-of-the-match for his all-round performance.

Roaring Lions won against Vijay Warriors in the afternoon on Saturday November 12 at the Persévérance field.

Winning the toss, Vijay opted to field first. UMA (9), ETEE (14) and Snehal (20) of Roaring Lions played responsibly and set up a target of 112 runs in 20 overs. Vanita Rabadia and Kastur of Vijay both grabbed 1 wicket each.

Upon batting, Kastur (15), Hetal (14) of Vijay tried hard but lost the match by just 1 run to the Lions. Bowlers of Lions Poongchudar, Snehal and Manjari all grabbed 1 wicket each.

Snehal Goswami was elected as player-of-the-match for her all-round performance.

On Sunday November 13, Narayan XI won against Lakstar Women in the morning match at the Roche Caïman field.

Winning the toss, Narayan opted to field first and bowled out Lakstar Women for 59 runs at 12.4 overs.

Yojani (11) was the best among the Lakstar Women, while Vanita, Vasanti and Manjula of Narayans all grabbed 2 wks each.

Vasanti Patel of Narayan was player-of-the-match for her all-round performance. 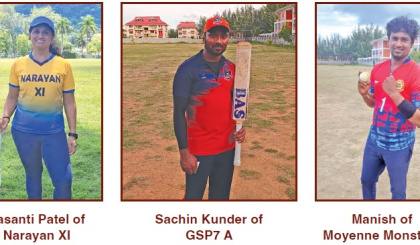