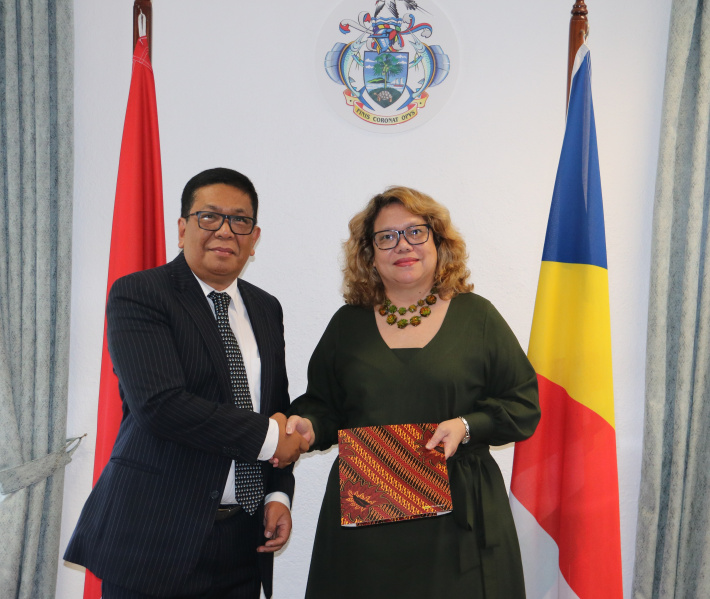 Ambassador Fock Tave congratulated the newly accredited chargé d’affaires in his new role and expressed Seychelles' appreciation of the friendship that exists between the two countries.

“Being archipelagos, Seychelles and Indonesia face similar challenges such as climate change and share an interest in various sectors, namely the blue economy, among others,” she added.

She also congratulated the chargé d’affaires for his government assuming the chairmanship of the G20 Heads of State and Government Summit taking place in Bali, Indonesia.

Ambassador Fock Tave and Mr Siahaan discussed the possibility of signing a general cooperation agreement between Seychelles and Indonesia.

Ambassador Fock Tave stated that the agreement will enable cooperation in various sectors, namely tourism and education, and will pave the way for a Joint Commission mechanism between the two countries.

Additionally, Ambassador Fock Tave discussed the vulnerabilities of small island developing states (Sids) and sought Indonesia’s support for the adoption and implementation of a Multidimensional Vulnerability Index (MVI), which accentuates the need for Sids to be assessed based on their vulnerabilities instead of their GDP per capita.

Mr Siahaan will be based in Madagascar.

The chargé d’affaires was accompanied to the meeting by the honorary consul for Indonesia, Harry Tirant, and consular staff based at the embassy, Nana Jupena.