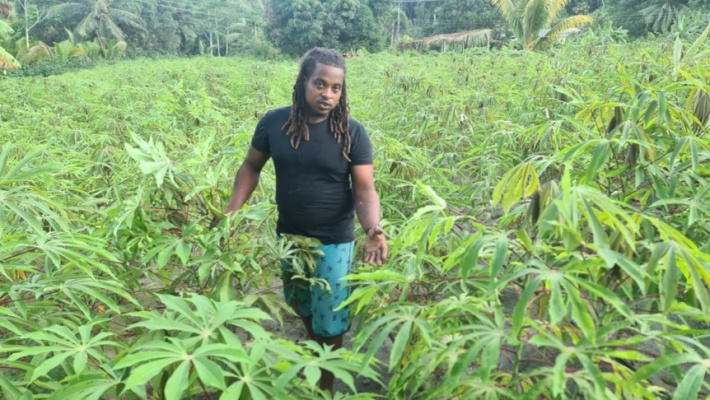 Growing crops and raising livestock to earn a living for himself and his family is the preoccupation of Ryan Magnan, a 29-year-old farmer from Val d’Andorre.

He cultivates cassava to feed the ‘galette’-making family business and raises a few animals principally for manure.

He did not choose to be in agriculture but was asked by his father to join him after he completed S3 level studies at the age of 14.

As such he has not gone through the process of setting up and operating his farm as a business proper.

This is typical of many small-scale Seychellois farmers. Like many others, Ryan sees huge potentials in agriculture but he lacks the knowledge to effectively tap into these opportunities.

Many farmers blame funding mechanisms and processes as the biggest hurdle in maintenance and expansion of their operations.

It is against this backdrop that a series of six regional capacity building workshops in business plans and farm designs for farmers were conducted during the month of September to close some of the gaps.

Seventy-four (74) farmers including 24 women and 7 youths were trained.

The training by local Ridge to Reef project consultants Georgie Belmont and Brian Nicette was also conducted for 16 extension officers of the department of Agriculture.

It also included a session on agroforestry farm costs and profits and sustainable farm designs and profits led by Ridge to Reef Project (R2R) technical advisor for Agriculture, Evelyn Drawec.

Getting to real cost of products

It came out clearly that most small-scale farmers are working hard but to be successful as a farmer one also needs to have good accounting and business skills.

Most of them are not collecting or keeping proper records of their expenses, revenues and other activities.

Record keeping is essential and allows farmers to make informed decisions on the price of their produce and prevent them from running at a loss which is often the case.

The facilitators used simple matrix for poultry and crop productions to teach the participants how to calculate fixed cost and variable parameters in order to determine real unit costs, profit and loss.

They were taught how to cost for inputs, from utilities, land, labour and capital to transportation, equipment, fertilisers, feed, mortality and many more in order to monetise every aspect of their production chains.

One participant,with over 20 years’ experience in agriculture, mentioned that he has never kept records nor approach costing of his products, as he has learnt today, instead he was solely focused on supply and demand at the given time.

One of the primary concerns echoed throughout all six sessions is the struggle to secure loans with commercial banks and lending institutions.

The participants overwhelmingly agreed that the procedures are very cumbersome and time consuming.

One participant who shared his experience said that after waiting for a very long time to get a loan from the bank, the approved sum was insufficient as the cost of all equipment and production parameters had gone up.

He had no choice but unwillingly applied for an additional loan barely half-way through his project.

They also complained about the grace period which they find to be too short as turnover in agriculture is long term.

The participants were given a run through of proper business plans for crop production and animal husbandry. From the need to have clear and realistic goals, marketing plans, implementation strategy to financial forecasts and budgeting.

It was evident that very few of the participants understood this aspect of running a farm. One farmer said that she relies on other people to put together the information requested by the bank, adding that now she understands why she has not been successful.

She agreed that in her case it is because she could not provide proper and reliable records and information.

Addressing this weakness, the participants were given an insight of the CAMPARI (Character, Ability, Means Purpose, Amount, Repayment and Insurance) method used by banks and investors in considering loan applications.

The facilitators explained how many applications fail because the entrepreneur does not directly and clearly show how a profit will be made on the initial capital therefore the bank is not certain on getting the money back so it considers the applications risky.

Emphasis was also put on revenue maximisation through value addition like making jam, packaging ready to cook fruits, vegetables and crops from excess yields in the high season or in the case of animal husbandry, the sale of manure, spend birds to name but a few.

The importance of farmers working together was stressed. By working together, farmers can increase their access to markets by combining yields and products in order to provide consistent and diverse supply to large buyers such as the hotels and restaurants. It also helps reduce costs, for example by sharing the cost of transport for market trips.

The R2R technical advisor also showed the income potential of agroforestry systems, and that while trees can take 5-10 years to mature and be productive, they require minimal care and maintenance and can offer a consistent addition to income. They can also benefit the whole farm ecosystem, reducing the amount of farm inputs such as pesticides and fertilisers needed.

The participants expressed great satisfaction at the training and most have described it as very insightful and eye opening.

“I have attended most of the training under the Ridge to Reef project and they have all been very insightful but this particular one has been mind-blowing,” says Ryan Magnan, adding that he has been impressed at the manner in which the facilitators have presented such a complex topic to their level and in Creole.

A female participant who assists her husband with accounting his crop and layer bird production businesses shared that she has been having a hard time convincing him to keep proper and separate records of his operations as he has no notion of accounting.

She hopes that such training can be repeated for others like her husband to attend. The farmers have asked that there are follow-up sessions and support from extension officers through coaching and monitoring.

The workshops were part of capacity-building for farmers component of the GOS-GEF-UNDP A Ridge to Reef Approach for the Integrated Management of Marine, Coastal and Terrestrial Ecosystems in the Seychelles Project (R2RProject). 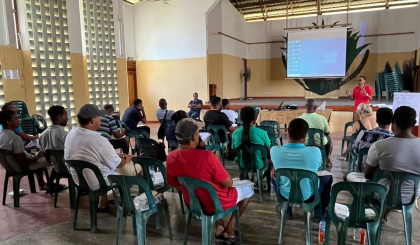 Farmers at the Praslin training session 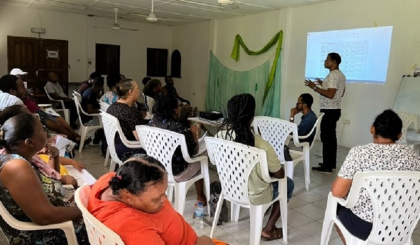 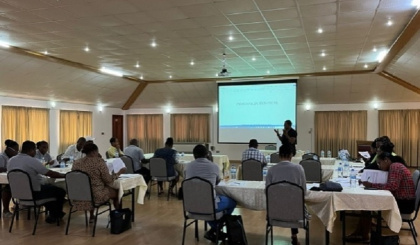 Participants at the STC conference room in Victoria