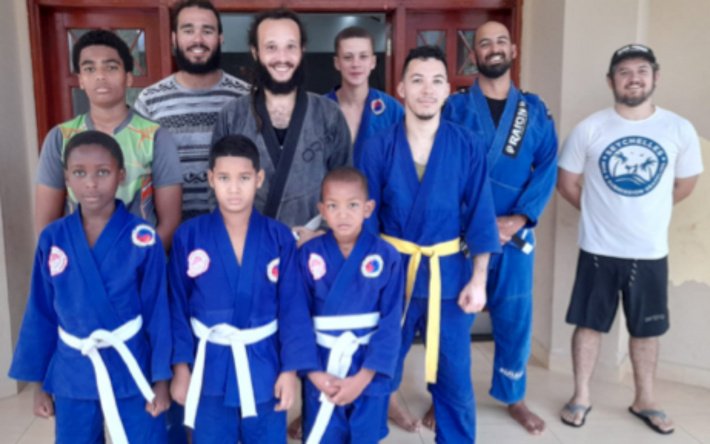 TCJJFS carries out joint training sessions ahead of Mauritius competition

The Traditional and Combat Jiu-Jitsu Federation of Seychelles, comprising dojos located at Roche Caïman and Bel Ombre, has been invited to compete at this year’s Open Africa Jiu-Jitsu competition scheduled to take place in Mauritius on Saturday November 12.

The delegation comprising six athletes will be led by Shihan Philip Philoé – 6th dan black belt in Japanese and Combat Jiu-Jitsu – who will be attending the event as a spectator and coach for the team.

The other members of the team are Jaydon Pothin, Shane Chang-Seng, Sady Payet, Miguel Madeleine and Derenzo Barbe, all of whom will be participating in the white belt division for their respective age and weight categories.

It is the first time that they are participating in such a competition on an international level and the participants are keen to learn as much as they can during the visit. The trip has been fully self-financed.

Ahead of the upcoming competition, the Traditional and Combat Jiu-Jitsu Federation of Seychelles (TCJJFS) received support from Vivian Hoareau and Adrian Nanty of the Mixed Martial Arts & Submission Grappling Association (MMASGA), who kindly offered to assist in joint training and contribute their knowledge in Brazilian Jiu-Jitsu to better prepare the participants for the event.

The two groups have jointly been training and sparring for two weeks and continue to train together in occasional sessions.

The result is that the two groups that previously trained in isolation (one training Japanese Jiu-Jitsu whilst the other training Brazilian Jiu-Jitsu), have now fostered a new-found comradeship in their love of Jiu-jitsu as they discover and share the similarities and differences between the two variants of the martial art.

Both the TCJJFS and MMASGA look forward to training together in future.

Students at the Roche Caïman dojo branch of the TCJJFS also had the opportunity to train under a black belt judoka, Calix Cesar from Praslin, whereby he taught them some judo takedowns and collar chokes.

Members of the Roche Caïman dojo also had the pleasure of having Julliano from Argy BJJ Club, Mauritius, who trained with them for the last two weeks before the upcoming competition during his vacation visit to Seychelles. Invitations to more international events will be forthcoming as the TCJJFS has already received another invitation from the All Japan Ju-Jitsu International Federation to participate in competitions and seminars taking place in 2023.