Ms Chang Leng became the first female captain on August 21, 2007 when she received her epaulettes from captain David Savy, who was the Air Seychelles’ chief executive.

She operated her first flight as commander two days later when she took command of an all-female flight crew to and from Mauritius, thus becoming the first Seychellois woman to captain the airline’s B767 jet. She was assisted by first officer Lishad Peermohamed-Matharu.

Ms Chang Leng joined Air Seychelles in 1997 as a co-pilot on the Twin Otter after aviation training in South Africa. She gained command of the Islander aircraft in 1998 and became a Twin Otter pilot the following year (1999).

Ms Chang Leng was transferred to international flight operations in 2001 when she joined as first officer on the B767.

She gained her airline transport license in 2006 in Phoenix USA, and completed the Boeing 767 command training in early 2007.

During her career she had commanded two all-female flight crew; the first in 2007 and the second to Paris, France, on March 8, 2011 on the occasion of International Women’s Day.

Seychelles NATION extends its deepest sympathy to families and friends of Ms Chang Leng as well as to Air Seychelles. 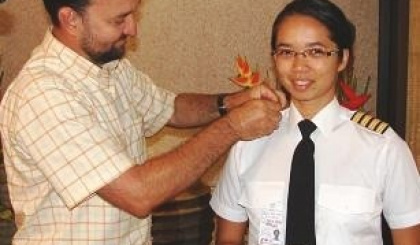