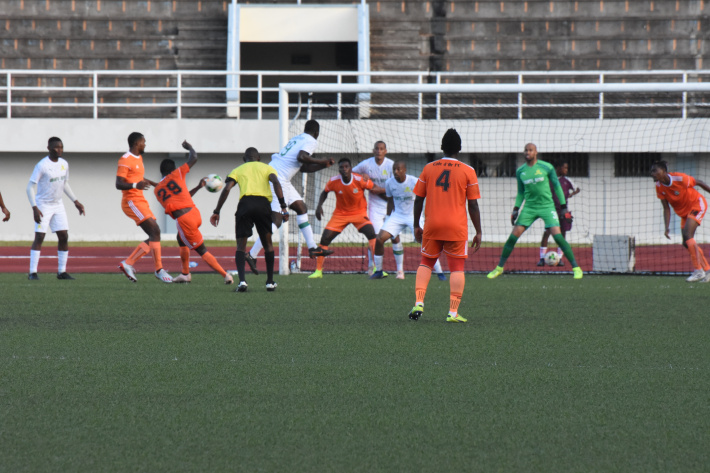 South African champions Mamelodi Sundowns mauled our local league champions Côte d’Or 5-0 at Stad Linite in the first leg of the first round of the Confederation of African Football Champions’ League competition on Saturday at Stad Linite.

Côte d’Or now have a mountain to climb in this encounter which was always going to be a tough task for our local team despite the South African champions overhauling the whole starting line-up and giving their fringe players some much-needed playing time.

Nicknamed the Brazilians, Mamelodi Sundowns made a bright start as they broke the deadlock in the 3rd minute from Motjeka Madisha’s teasing cross in the Côte d’Or penalty where Tiayani Mabunda rose majestically to head past goalkeeper Jean-Paul Lesperance for a 1-0 lead.

Sundowns seized control of this match as they kept stroking the ball around trying to tempt their opponents out of a reinforced defence.

The South Africans found it hard to penetrate the defence but they had two decent chances. The first came in the 17th minute from Sibusiso Vilakazi’s through ball to Sphelele Mkhulise who blazed the ball over the crossbar.

Mkhulise had another scoring opportunity in the 28th minute from a counter attack when he cut inside his marker but curled his shot just wide of the far post for a 1-0 lead at half-time.

Côte d’Or, who failed to register any shot on their opponents’ goal in the first half, showed more willingness in the second half where Ugandan striker Tony Kizito hassled for the ball with Thebogo Langerman in the 58th minute to flick the ball goal ward but Sundowns’ captain Wayne Arendse made a last ditch clearance on the goal line for a corner.

The players of coach Pitso Mosimane though doubled their lead in the 71st minute from an inswinging cross by Mabunda to pick out Lyle Lakay who had drifted into the Côte d’Or penalty area unmarked and he buried his header in the roof of the net to make it 2-0.

Côte d’Or responded in the 72nd minute from Nigerian Peter Adeshina’s through ball to substitute Perry Monnaie who battled his way into the penalty area and his near post shot was just diverted into corner by a defender.

The Praslin outfit though conceded a soft third goal when defender Sergio Barra slipped to let in Lakay who waited for the right moment to set up Mkhulise who slotted the ball home to make it 3-0.

Mabunda, who had tormented the Côte d’Or defence all afternoon, bagged his brace in the 77th minute after a clever back heel by Mkhulise put him free and he fired a rasping shot low in the bottom corner for a 4-0 advantage.

Côte d’Or suffered a major setback with the sending off in the 81st minute of substitute Herve César who had come on in the middle of the second half for the injured Jones Joubert but was a surprise selection ahead of their normal replacement, namely Marcus Rose.

César pulled back Mkhulise who was in full flow on his way to the Côte d’Or penalty area and as he was the last defender, Mozambican referee Celsio Armindo Alvacao showed him a straight red card for his marching orders.

The South Africans put the icing on the cake with a fifth goal in the 87th minute from Oupa Manyisa’s long pass to captain Wayne Arendse who had moved forward from defence and he adjusted himself to plant the ball into the net for a whopping 5-0 scoreline and their coach Mosimane was happy with this away result.

Victory at the Stade Linite means the Brazilians have ended their seven-match winless run on the road in the Caf Champions League.

What they said after the match

Mamelodi Sundowns coach Pitso Mosimane: “It is always nice to win especially with lots of goals but it was a difficult match especially as our opponents sat back in numbers in the first half and made it hard to penetrate but they came out in the second period and had their chance but they grew tired and we managed to get more goals and I’m happy with the result for this team that we fielded for this away match.”

Côte d’Or coach James Barra: “We adopted a very cautious approach in the first half against a very good team and had our chances in the second period as we were still in the match until the last 20 minutes where we seemed to lose our concentration afterwards and gave our opponent some simple goals and they capitalised on them to score freely.”

Côte d’Or captain Benoit Marie: “We were facing a top class team but we managed to contain them for a long period but the a couple of individual errors cost us dearly as I still feel we could have done better if not for the mistakes.”

Mamelodi Sundowns captain Wayne Arendse: “We travelled here without knowing much about our opponents and what to expect, so we decided to maintain possession and play a patient game which paid off in the end where we got five goals and also did not concede which is a good away result.” 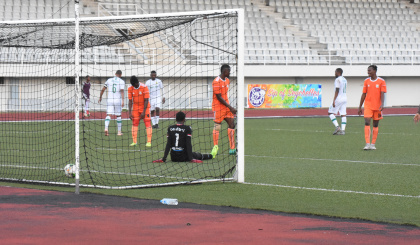