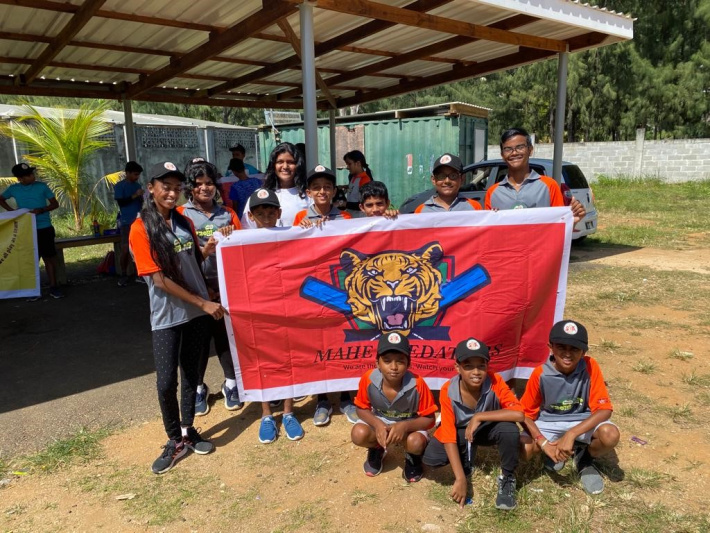 Last Saturday, three games were played simultaneously in the Seychelles Junior Cricket Tournament at the Seychelles ‘Home of Cricket’ ground at Ile Persévérance.

All six teams are jockeying for position on the top of the log.

Match one was played between the mighty Mahé Predators led by Prajesh Selva Kumar and the Royal Strikers who were reeling from their previous week loss. Captain Prajesh won the toss and decided to field, bowling to the opposition captain Jishin Jins who stroked the first delivery of the day for a mighty six but Prajesh got his own back with the very next delivery bowling Jishin out. After that the Predators bowlers bowled a tight line and length and restricted the Strikers to 69 runs with the loss of six wickets for the allotted 10 overs. The standout batter for Strikers was Maulik Jeshani with 14 runs. The pick of the bowlers for the Predators was Ved Premji Vekaria with stats of two overs, two wickets for just five runs.

The Mahé Predators went into bat with their two top gun batters in Gautham Naidoo and captain Prajesh Selvakumar and both batters hit the ball all over the park with Prajesh being in a dominating mood, hitting four 6s and one 4 . The Predators reached the target of 69 with the loss of 2 wickets in the seventh over.

The won the match by 8 wickets.

Match two saw star-studded Seychelles Sixers take on the unlucky English River Elite Hitter who had lost their previous week’s match on the final ball of the inning. English River Elite Hitter won the toss and elected to bat first but got off to the worst possible start after losing both their openers early. They managed to reach the score of 82 for their quota of 10 overs for the loss of 5 wickets thanks to young Dylan Savy blasting 17 runs with two 6 and one 4. All bowlers for the Seychelles Sixers were in the wickets with the standout being Hari Patel who got two wickets for 8 runs in his two overs.

The Sixers came on firing with Alisha Sharma getting off to a flying start, hitting two 6s and one 4, and Rohan Venkateshwaralu got five runs. Then both openers got out in similar fashion being stumped by Kallum Thomas off the bowling of Amrith Patel and Dhrunil Hirani. With both openers back in the hut, Sixers captain Deepesh Hirani and Selvesh Senthil consolidated the innings and took the score close but lost Selvesh who was bowled by Amrith.  Captain Deepesh ensured no more wobbles and got his team over the line in the seventh over, thus winning the match by seven wickets.

Match three was played between the strong Persévérance Lions and the cautious Cascade XI who were looking for their first win of the tournament.

Cascade Xi won the toss and put the Lions in to bat. The Lions came roaring out of the block with a mammoth score of 108 in their allotted 10 overs for the loss of 3 wickets with the bulk of the scoring being done by Ranesh Rangan with one 6 and five 4s and their skipper Lithira Hathurusinghe with three 6s and two 4s.

The Cascade XI walked in to bat chasing the highest score in the tournament but fell short having Majid ran out in the very first over. Cascade XI limped to a score of 55 over the 10 overs bowled with captain Jenil Sindhav standing out with an enterprising 20 runs before being caught off the bowling of Sheryas Hirani.

Lions won the match by a massive 53 runs, thus pushing them to the top of the table on run rate difference.

Third round matches will be played on Saturday November 5, 2022 starting at 10am at the same venue.

The Seychelles Cricket Association invites members of the public to come and enjoy the keenly contested junior cricket league. 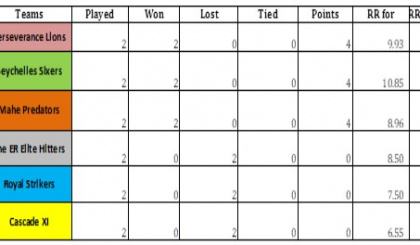 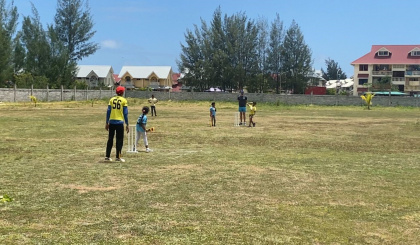 Action from one of the matches (Photo: Contributed)