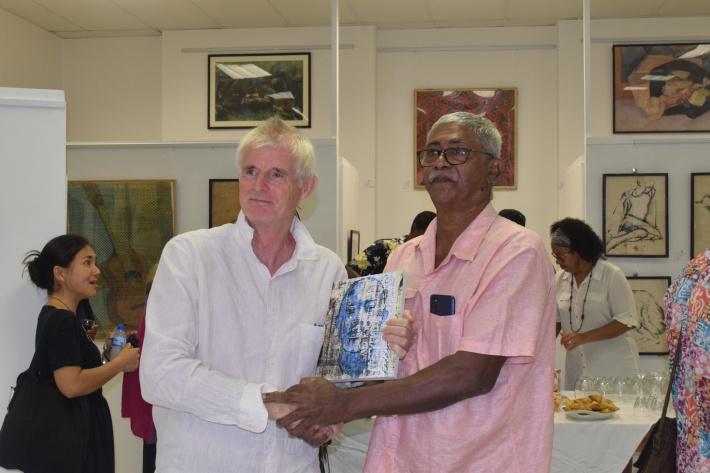 The artist presents a copy of his book to Mr Kennedy

After a forty-year wait, family, friends and colleagues of artist Justin Reddy were able to feast their eyes on a collection of his best pieces – from drawings to collage and paintings.

The artist held his book launch and vernissage, aptly named ‘Reddymade’, after his surname, at the Eden Art Space Gallery on Saturday evening in the presence of two dozen guests.

It was an emotional Justin Reddy who thanked everyone who had played a key role in his life to get him to where he is today, including his teachers at Seychelles College, namely Peter Pierre-Louis and Christine Harter, whom he said were his “devoted catalysts teachers”.

“I like to collect items such as stamps and coins or discarded objects like plastic bottle tops or empty bottles, items that fascinate me, or just capture my attention because I don’t understand them, and I work with those. Of course with a play on my surname to make it current,” said Mr Reddy.

The 60-year-old said he works mostly with mixed media, and pays particular attention to the process.

“When going through the process, I will decide if I have to sew or nail it, or whether to tear it up or cut it. These are the actions that will take place when I am actually working on the art work or processing it,” explained Mr Reddy.

As to why he had waited so long to host his first solo exhibition, Mr Reddy said he was busy with other personal commitment. However it did not stop him from scribbling here and there or to experiment with various artwork, “but it was not work to be exhibited”.

He then decided that at his age, he needed to present something to the public.

“It is about time I show the public what I’m doing, where I am with my work and get their criticisms, as this is the only way for me to know which direction I should be taking in the future,” he added.

When introducing Mr Reddy, fellow artist and member of Arterial Network Seychelles, Martin Kennedy, expressed his appreciation that the artist who had been so far under the radar has now opted to come into the limelight.

Mr Kennedy said he has come to like Justin’s work, based on his style, as he makes series of works, which was very important in the artwork, and his style was slightly different from his and other artists.

“One thing that important artists do is they explore a topic, a theme, a concept, a muse from so many different angles and we have this particular image, worked and re-worked in metal, in wood, and in traditional drawing,” he said.

At Saturday’s launch, Mr Reddy also signed and presented copies of his book, with a collection of all the artwork on exhibit, to some of his friends and colleagues present.

Fellow artist and friend, Danny Sopha, said the exhibition brought mixed feelings; one of elation for finally getting to see Justin’s work and sadness as the younger generation may not know about such a talented local.

“It is sad and it pains me when I think of the major sacrifice he has made for 40 years, guarding these pieces, which should have been displayed in a special gallery for the younger generation and visitors to come, see and appreciate his contribution,” said Mr Sopha.

Mr Sopha also appreciates his colleague’s style; “he works in series, his art works are made of ink, collage and I really appreciate the portrait on rusty corrugated iron sheet made with the use of nails”, which he said touched him profoundly as it reminded him of a human’s life.

“You see the rusty corrugated iron sheet, depicting life from birth till death. What is left behind is the portrait, a piece of art work, with lots of souvenirs, experience and lessons learnt, life’s path and maturity gained,” he said.

For, Justin’s friend and neighbour, Wilness Franchette, ‘Reddymade’ has been five years in the making and he was hundred percent behind the project, with words of encouragement and support.

“Even if I am not an artist, I understand a beautiful piece when I see one and although at times he felt discouraged, I was always there, my wife and I, as a friend, to give him that extra push as he had never done a solo exhibition. His work is beautiful and I am glad he finally put it out there for everyone to see,” said Mr Franchette.

Present at Saturday’s vernissage was also the chief executive of the National Arts Council, Jimmy Savy, who was highly impressed with Justin’s “diversification in technique and style and how his pieces are refined”.

«Not only does it show his patience, but there are styles that I have never seen in so many years in this field. You can see he is an artist who has grown and has a lot of experience. It is rare to see a solo exhibition having that many scopes, different styles, it is just amazing,” said Mr Savy.

For her part, Kathleen Butler said the artist was in a league of his own and according to her he is plainly “very gifted and talented”.

Justin Reddy’s art works are selling for as low as R8000 and up to R40,000. However, the artist said not all of his works are for sale. Some will remain as reference as they need to be developed further through some additional work.

‘Reddymade’ can be viewed at the Eden Art Space Gallery.

The accompanying photos show highlights of the exhibition launch and some of Mr Reddy’s works on display. 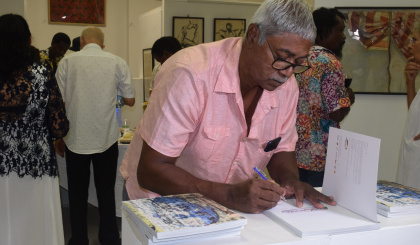 Autographing copies of the book 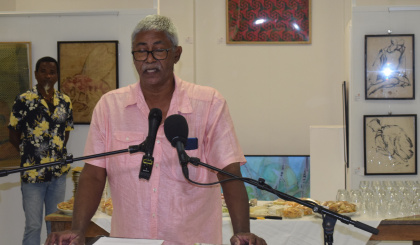 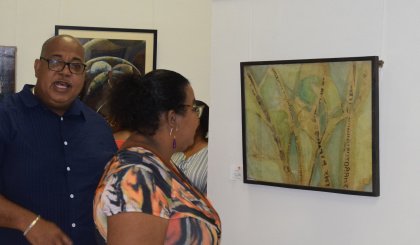 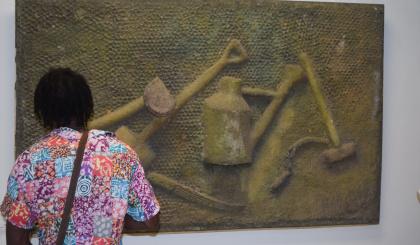 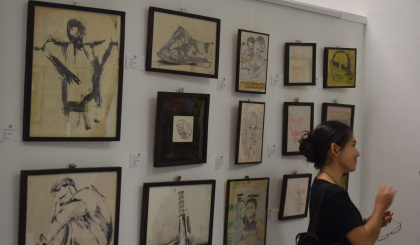 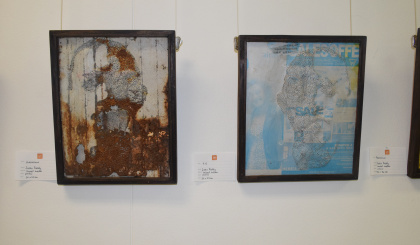