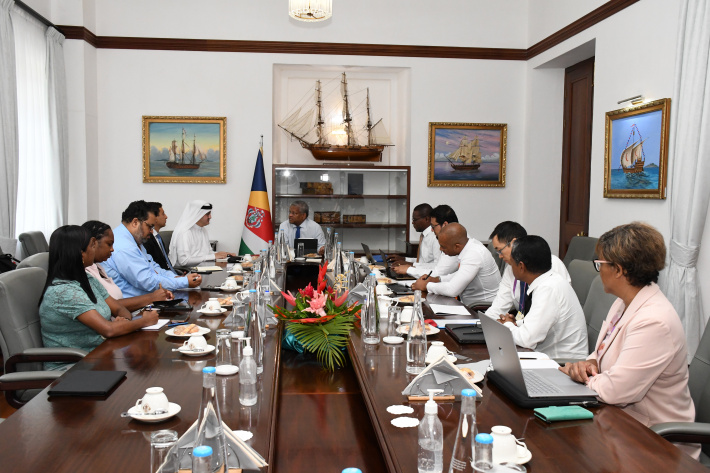 Masdar, an energy company based in the United Arab Emirates (UAE), is assessing what kind of support it can give Seychelles in developing the latter’s renewable energy programme.

Representatives of the firm yesterday met with President Wavel Ramkalawan at State House to discuss the subject.

The meeting is a follow-up to a tête à tête between President Ramkalawan and the President of the UAE, His Highness Sheikh Mohamed Bin Zayed Al Nahyan, at State House in August, which included a request for renewable energy projects for Mahé, Praslin and La Digue. The matter was further concretised, among other topics, during bilateral talks with the UAE Minister of State in the Ministry of Foreign Affairs and International Cooperation, H.E. Sheikh Shakhboot Nahyan Al Nahyan, on the sidelines of the 77th United Nations General Assembly, New York in September.

Established in 2006, Masdar is an international renewable energy and sustainability company that advances solutions in energy, urban development and clean technologies.

Apart from the company’s director for energy services and clean energy, Khaled Ballaith, and the company’s senior manager business development, George Shenoude, also present in the meeting, chaired by President Ramkalawan, were Vice-President Ahmed Afif; the Minister for Agriculture, Climate Change and Environment, Flavien Joubert; the principal secretary for Energy and Climate Change Tony Imaduwa and representatives from the Public Utilities Corporation (PUC) and the Seychelles Energy Commission (SEC).

Speaking to the press after the meeting, PS Imaduwa stated that it was based on the way forward in regards to the request made by President Ramkalawan for assistance to develop our renewable energy sector.

He said that while the discussion was more on possible types of support that we could get, the two representatives will also explore our country’s topography to determine the kind of renewable energy suitable for deployment here.

He noted that apart from solar PV which is something the company is more experienced in, they are also looking at other renewable technologies that will suit us such as waste to energy.

He added that a request was made to the two representatives for the possibility of looking at energy potential from our off shore wind.

PS Imaduwa said that the country’s renewable energy programme has progressed steadily with the amount of 6.5MWp photovoltaic (PV) system installed on some houses and buildings across the country and the installation of the 6MWp wind turbines at Ile du Port and Ile de Romainville, which also include 6MWp solar farm on the island.

To do this, the country is working to address some institutions, policy and legal technical challenge issues which also include improving the country’s network to store energy.

He added that while the Seychelles Energy Efficiency and Renewable Energy Programme (SEEREP) – that allows consumers to secure loans at 5 percent interest rate – still exists, the country is working on some promotional incentives for more people to invest in renewable energy.

For his part, Mr Ballaith said that given the company was involved in the country’s wind turbine project, they are happy to again assist us to develop our renewable energy programme.

He noted that our country has potential for renewable energy projects and that the discussion will pave the way for more collaboration in the field.