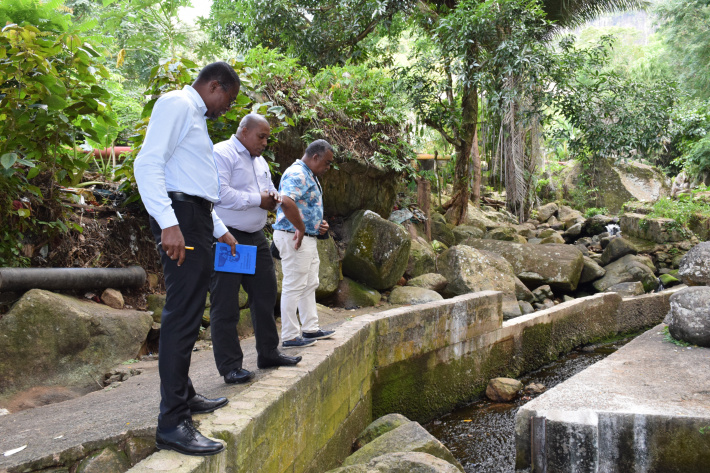 Following heavy rains and flooding at Corgate Estate and the Mont Fleuri district in March, Minister for Agriculture, Climate Change and Environment (MACCE), Flavien Joubert, yesterday conducted a site visit, alongside member of the National Assembly for the district Michel Roucou.

The visit, which took place yesterday afternoon, was aimed at following up on certain matters affecting residents near the Rochon River and other small water sources running through the district, during periods of heavy rainfall, and following the heavy flooding.

Starting off at the Basen Larme, Rochon, a popular meeting point and recreational space for children and residents of the area, the delegation, also comprising district administrator Steve Noël and officials of the Climate Change, Adaptation and Mitigation (CCAM) division of the environment ministry, discussed the means by which to desilt and to prevent debris from clogging up the waterway.

MNA Roucou affirmed that the site has in the past been, and remains, a much-loved asset to youths in the district, as somewhere where they learn to swim and enjoy the cool, natural water flowing through.

From there, the delegation moved towards various residences that were severely impacted by the March floods, while others located near or alongside the river paths are persistently impacted during periods of heavy rainfall.

“It is important that we have this visit with other partners, including the environment minister so they can view first-hand the problems that we face in the Mont Fleuri district. Even if it’s not on such a large scale, it is really important, as the more it prolongs the more it will cost.

“There are also rivers running through private properties, which we believe is important that we bring to the attention of the ministry, so they can better understand the challenges faced by the people. It is also important for us as the district to remain abreast of the situation, so when our residents come to us, we can better advise them,” MNA Roucou pointed out.

There are around twelve rivers running through the district, including the large Rochon River. Since the flooding, some desilting works have been carried out near the Mont Fleuri school, and just opposite to the Kan Gard area, has been of great help to residents, reducing the risk of major flooding.

In the past, there have been several instances of flooding in the area, although not as bad as the most recent one.

Mr Roucou urged residents to claim ownership of the natural assets found in the district, as important water sources. He called out to them to keep the rivers and nearby areas rubbish and waste free, and to join government in its efforts to keep these sites clean.  He hopes to be able to address certain issues faced by residents at the soonest.

For his part, Minister Joubert highlighted the importance of such visits to gain deeper insight into the challenges, and certain minor problems that persist. In such situations, the role of the ministry is to try to identify what resources they can contribute towards addressing the issues and providing advice and guidance.

Agencies including the Seychelles Infrastructure Agency (SIA) are instrumental to certain projects, in bringing about solutions which satisfy residents, while also minimising the risks from flooding.

“Our role is to support the DA and MNA who are in touch with residents to cooperate. It is right that they are advising residents to keep the areas clean, since it costs a lot to address these issues. If we exercise our responsibility, and government on the other hand supports them, this will be of great help,” Minister Joubert stated.

With regard to unofficial sites such as Basen Larme, considering the important value it holds for residents and many Seychellois in general, government will not hesitate to invest resources to desilt the area, to help residents develop a sense of responsibility.

“On our side, it is about doing the maximum to make people comfortable in their environment, with the expectation that they will also become more responsible, and take charge of their surroundings,” Minister Joubert added.

The accompanying photos show some highlights of the ministerial delegation’s site visit yesterday. 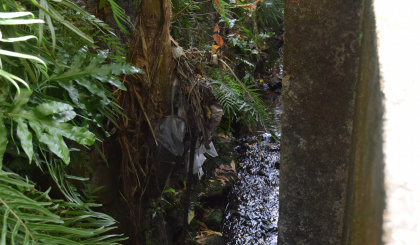 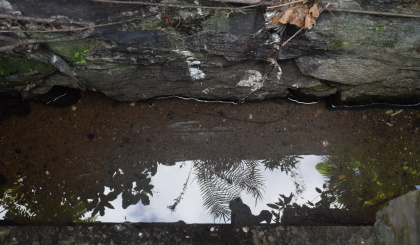 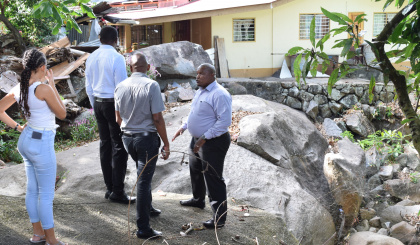 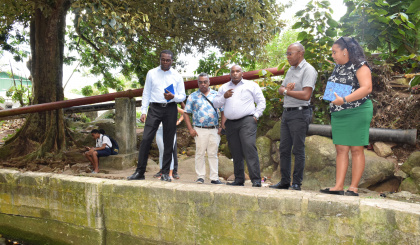 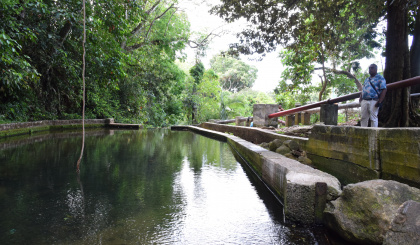