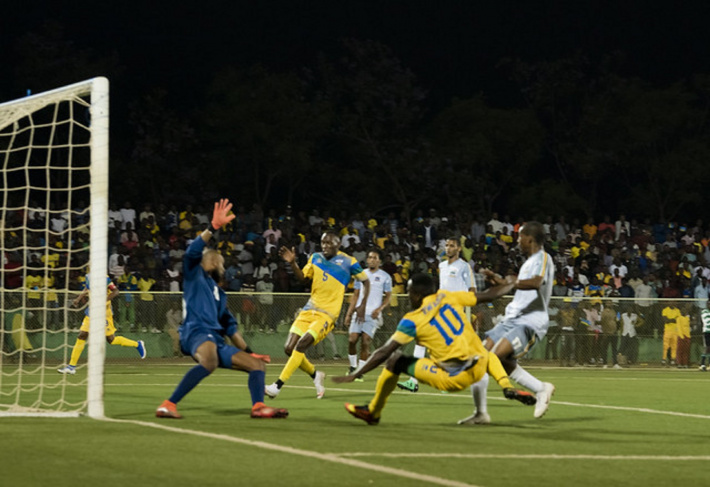 Rwanda humiliate Seychelles in away match

The Amavubi of Rwanda are in the group phase of the 2022 Fifa World Cup qualifiers after thrashing Seychelles 7-0 in the away match at the Stade Nyamirambo in Kigali on Tuesday night.

They qualified 10-0 on aggregate, after defeating our national selection 3-0 in the first match last Thursday at Stad Linite.

A brace each from skipper Jacques Tuyisenge and Meddie Kagere topped up individual strikes from Yannick Mukunzi, Djihad Bizimana and Muhadjiri Hakizimana as the Rwandese romped through.

In fact, the match featured the highest score in the preliminary round of the African qualification.

Bizimana sent the Rwandese on with a well struck effort off Hakizimana’s training ground routine corner after 16 minutes. Kagere and Tuyisenge sent Rwanda 3-0 up in a space of three minutes in the 27th and 30th minutes, each making the most of defensive errors.

Tuyisenge then made it 4-0 with his second goal of the night with a first time volley off a Fitina Omborenga cross to take Amavubi firmly in control.

The Rwandese finished the job in the second half, Kagere completing his brace with a simple tap in before Mukunzi headed them 6-0 up, scoring in similar fashion like he did in the first leg.

The impressive Hakizimana notched one with a neat finish from close range.

For the qualifiers, the Seychelles selection are under the guidance of Dutch coach Jan Mak, who replaced Seychellois Gavin Jeanne after the Indian Ocean Islands Games.

Coach Mak will be in charge for two months, precisely until October 31.

Elsewhere on Tuesday, Mozambique also progressed to the group phase of the qualifiers with a 3-0 aggregate win over Mauritius after a 2-0 win in Maputo. Goals from Clesio Bauque and Geny Catamo from the penalty spot saw the Mambas book a slot in the next round.

In Luanda, Angola went through 3-1 on aggregate against the Gambia after beating the Scorpions 2-1 on the night. Fabio Abreu struck the winner in the 68th minute, just three minutes after Assane Ceesay had taken Gambia level.

Geraldo had taken Angola 1-0 up and 2-0 on aggregate with a 41st-minute goal.

In Lomé, Togo went through after a 2-0 victory over Comoros. An own goal from Kassim M’Dahoma set Togo on with Gilles Sunu stepping off the bench to score a 71st minute second.