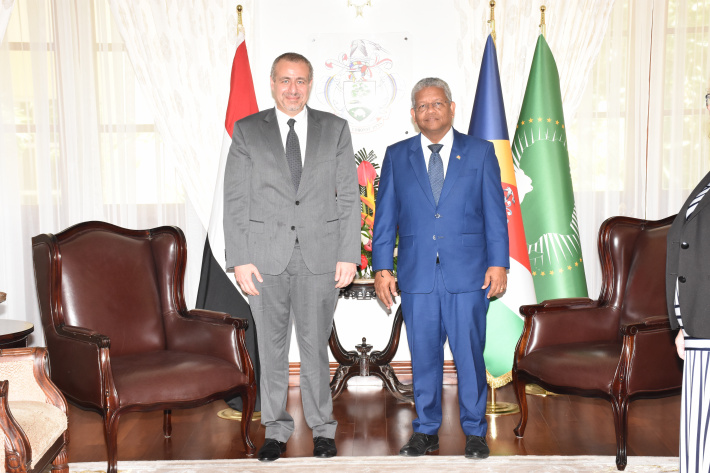 • Will continue to serve life sentence in Egypt

He shared this information to President Wavel Ramkalawan yesterday when paying a farewell visit to the head of state at the end of his three-year mandate.

In an interview with local media following the discussion, Mr El Abyad said he had reassured the president that the men were doing well and the Egyptian authorities will do their best to respond to requests for a visit or to check on their health.

The three men – Ronny Norman Jean, Yvon John Vinda and Dean Dominic Loze – had their death sentence for capital crime of drug trafficking in 2013 commuted to life sentence in November 2015, after intensive diplomatic negotiations between the two countries.

Following this they were moved to a more comfortable prison in Cairo, which Mr El Abyad said allows Seychelles’ ambassador in Addis Ababa “to visit them whenever the need arises, as well as their families, who can visit whenever they want”.

He said the three men will continue to serve their sentence in Egypt, “and we’ll see if maybe in the future at one time, they will return to Seychelles”.

Yesterday’s discussion with the Seychellois president also focused on bilateral relations which he said has been consolidated during his tenure.

Mr El Abyad said he was satisfied that the two sides have been able to resume training courses offered by the Egyptian agency of Partnership for Development, since 2019.

He added that since then, over 82 Seychellois government officials have benefitted from the training in Egypt.

Seychelles and Egypt also talked about how to venture more into the tourism sector.

“We discussed how to scale up our relation in the tourism sector, which is an important sector. We already have many Egyptians who are interested and who come quite regularly to Seychelles, and we have Egyptians working in Seychelles in the tourism industry,” the ambassador said.

This will be the 27th United Nations Climate Change conference and President Ramkalawan will be joining other heads of state for the World Leaders Summit from November 6-8.

The Egyptian Ministry of Foreign Affairs is the current COP president and the country is taking the lead in the preparations.

Mr El Abyad said preparations were well under way and being the “African COP”, it would be an important one to agree on various issues such as “whether to implement Paris agreement and also to follow up on the pledges and commitment made in Glasgow, to try to have a balanced outcome when it comes to reduction of emissions, and to have a more effective adaptation plan”.

The outgoing ambassador said he leaves Seychelles with some fond memories, and the most memorable one was his courtesy call on President Ramkalawan.

However he expressed his regrets that he could not come to Seychelles more often during his tenure as his accreditation took place shortly before the Covid-19 pandemic in 2020.

Ambassador El Abyad was accredited in November 2019, and was based in Nairobi, Kenya.