The workshop in progress

Praslin artisanal fishermen have been presented with a new tracking device and taught how to integrate it with the logbook and market traceability tools for the co-management of small-scale fisheries sector in the country.

The new device, called NEMO, provided by the Seychelles Fishing Authority (SFA) was introduced to the fishermen at a half-day workshop recently at the Seychelles Pension Fund.

According to Betty Mondon, the project coordinator for SEYCATT, which is partially financing it along with Abalobi, the project is aligned with the national Blue Economy strategic roadmap (2018-2030), which has been developed to transition to sustainable fisheries and safeguarding the oceans while developing the national blue economy sector.

“Fishers are encouraged to collect data and record their transactions – fishing trips, costs, challenges, profits, marketplace, etc. so we know what impact them and how new laws and policies can help or damage them. This also creates an enabling environment for the co-management of these resources between fishers themselves and fisheries management authorities,” she said.

Mrs Mondon said one component of the project is that artisanal fishing boats, which were not equipped with VMS system, will now be able to install the new tracking device which has been adapted specifically for them.

“They have learned how and where to install the device on their boats, and why it is important to have the tracking device. We have told them why it was important to track their movements and collect data of their daily activities at sea, such as where they fish and how much time they spend in a specific area,” explained Mrs Mondon.

SFA, which is supplying and installing the NEMO device, explained that the equipment functions similar to a VMS system, and similar to VMS it will also be useful in distress as the fishermen will be able to alert the coast guard for assistance. It also uses geo-fencing to notify fishermen when they are entering protected areas.

Speaking to Seychelles NATION, the company’s monitoring, control and surveillance manager, Roddy Allisop, said the device has been compacted to make it smaller for portability purpose and it has been designed especially for those small fishing vessels which, unlike bigger vessels, do not have autonomous power supply.

“This device, once charged, can last one month without recharging at it uses solar energy. It also uses hybrid global connectivity, using GPRS/IoT networks in coastal areas and automatically switching to satellite systems when the vessel moves outside the range of terrestrial networks. So if the vessel is within 16 nautical miles from land, it will report on the mobile network but if it goes above 16 nautical miles, then it will transmit via satellite,” explained Mr Allissop.

SFA has ordered 300 such devices which are being installed on all artisanal fishing boats.

The second component of the project is the use of the mobile application, Lansiv-Abalobi, the data collection systems for artisanal and small-scale fishers to help raise the level of quality and the handling of catch at sea.

ABALOBI, which means ‘traditional fisher’ in a South African dialect, is a non-profit organisation, based in Cape Town, but with a global reach, including Seychelles where it works with small-scale fishers through the use of Information and Communication Technologies and capacity building to foster responsible fisheries management.

Keith Andre, who is Abalobi’s local project manager, said the workshop was important to teach the fishermen how to use the various devices including the platform, Lansiv- Abalobi to collect data, as data collection remains one of their biggest challenges.

“It allows them to log their catch of the day, their trip details as well as expenses of each outing, fuel, sale from each catch, etc, because eventually with all the measures being put in place such as the co-management plan by the SFA, artisanal fishers will have to be able to collect their own data,” said Mr Andre.

He explained the other component of Lansiv-Abalobi is market traceability which allows buyers especially hotels and restaurants to trace the origin of their catch, as well as allow them to place their order based on what the fishers have logged.

“It is important that they start collecting data not only for tax purposes which is a requirement. but even for security purposes in the long run if they want to access finances from banking institutions. They need to be able to keep track of their business’ expenses and transactions,” said Mrs Onginjo.

She added that data collection will also allow them to keep track of their annual performance and make comparisons.

Thirty fishers are taking part in the pilot project to integrate the tracking device, logbook and market traceability tools, that will be done over an 18-month period.

According to the project coordinator, the inception workshop started on Praslin as it is a smaller and close-knit fishing community, with better collaboration and this will facilitate data collection. However, the project will be targeting the whole country. 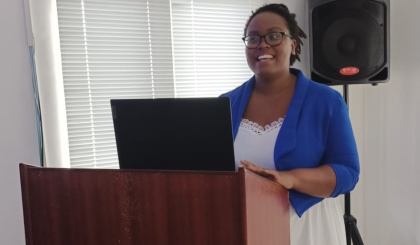