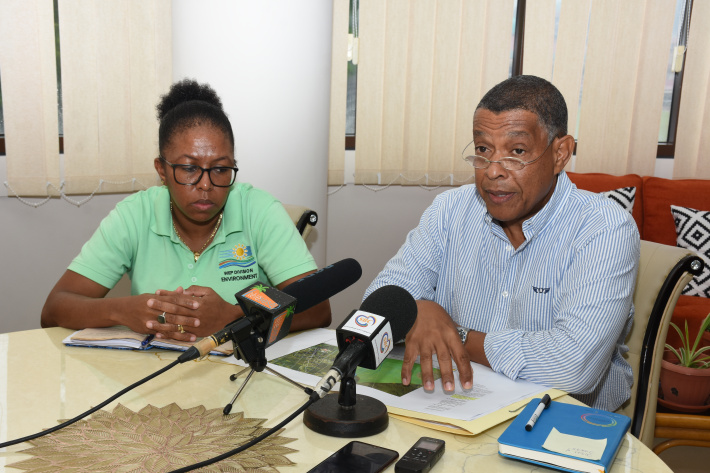 The Seychelles Planning Authority and the department of environment are working with the Attorney General’s office to prosecute a contractor, who is also the land owner responsible for an illegal development at Mare Aux Cochons, Bel Ombre.

It was the chairman of the Seychelles Planning Authority, Cyril Bonnelame, who made the comment during a press conference yesterday morning at the authority’s headquarters at Independence House Annex, to shed light on the illegal development on a parcel of land containing a house.

This followed the circulation of the work in progress on a social media post on Sunday September 25, 2022.

Also present for the press conference was Nanette Laure, director general for waste, enforcement and permits division within the environment department.

Mr Bonnelame said the Seychelles Planning Authority and the department of environment were alerted on the incident prior to the post being circulated on social media and through investigation made, it was found that the earthworks and site clearance done were illegal, meaning that the developer had no approval from neither the planning authority nor the department of environment to carry out any works on the property.

He added that a stop notice was served on the main contractor and on two other sub-contractorswho were working on the site.

He stated that the plan to develop the parcel of land, with a Public Utilities Corporation (PUC) water catchment below it, has not been approved yet as it is still under evaluation, thus the contractor had started work without planning permission.

Mr Bonnelame said given that the contractor knows full well that he was doing illegal earthworks and site clearance in an area where there is a water catchment, and during the rainy season, without any planning permission or environmental consideration, and knows the consequences that it carries, they are invoking necessary provisions of their respective laws to have the critical situation on the site remedied and to prosecute the contractor who is also the land owner for the illegal destruction of our environment.

Mr Bonnelame said it was sad to note that people are still not willing to go through the normal process of waiting for approval before starting their projects. He said the application for the development at Mare Aux-Cochons is still being evaluated by the board and the contractor went up onto the mountain top to illegally start the site clearance and earthworks.

He said measures are being put in place to contain the impact of the earth cuttings on the water catchment and on residences situated below the said plot.

As for Mrs Laure, she said the department of environment is very disappointed and concerned with the activities being undertaken at the site.

She noted that when people do not respect the law, necessary actions will be taken against them, especially with regard to possible environmental impacts that may occur as a result of illegal activities.

The Seychelles Planning Authority is reminding members of the public, especially licensed building contractors, that undertaking construction works, including earthworks without a valid planning approval, is considered illegal under the Physical Planning Act 2021 and that severe actions will be taken against those who contravene the provisions of the law and cause destruction.