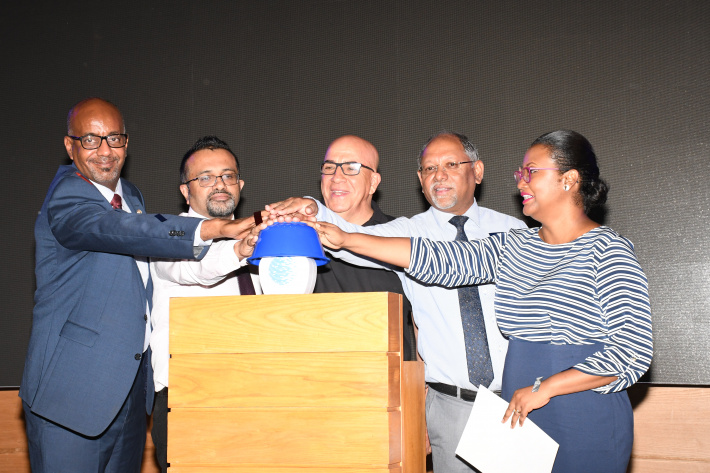 The public can now buy shares in Seychellois-owned telecommunications company, Cable and Wireless Seychelles (CWS), after it was listed on the MERJ exchange yesterday morning.

The listing took place in a ceremony at the Eden Bleu conference room in the presence of Vice- President Ahmed Afif and other ministers, the company’s board members, the Governor of the Central Bank, and the President of the Eastern and Southern African Trade and Development Bank (TDB), Admassu Tadesse, who is presently on a working mission to Seychelles.

The company’s chief executive, George D’Offay, said being listed on the stock exchange was a momentous occasion for the company, one that CWS has been aiming for since becoming a fully Seychelles-owned company back in 2019.

«We decided back then that it was important to allow Seychellois to be part of this venture and to make Seychellois so proud of a company,which has been doing business in Seychelles for 130 years,” he said.

Mr D’Offay, who also highlighted the company’s achievements over the years and benefits that the listing will bring, called on local customers to join the company as it transforms telecommunications in the Seychelles.

“For those who are seeking one opportunity with endless possibilities, becoming part of CWS is the first step towards a digital future with the telco company that has continuously connected Seychelles to the rest of the world. CWS is a well-positioned company and will continue to benefit from further growth,” he said.

For his part, Vice-President Afif congratulated CWS for its achievement and said the company was doing something of national importance.

He added that being listed on the MERJ Exchange “puts Seychelles at a different level”.

Vice-President Afif also praised the company for involving the public in its project.

“This is all part of the company’s vision to bring CWS to the homes, people are not just users but part of the service that is offered.”

For his part, the Minister for Finance, National Planning and Trade, Naadir Hassan, said the landmark occasion was not of great importance only to Cable and Wireless, but also for the country, as the listing contributes towards the continued development of the financial market in Seychelles.

Minister Hassan said the country can no longer rely only on traditional methods for raising financing and it was therefore crucial to develop the capital market if Seychelles were to accelerate economic growth and create wealth.

“A deep and efficient domestic capital market can contribute towards increased liquidity, reduced transaction costs and improved avenues for diversification of risks. More importantly, it provides a platform whereby companies seeking financing can be connected to lenders and investors,” he said.

Minister Hassan also encouraged other local companies to come forward and list as the benefits are numerous, “including broadening the shareholder base, raising funding for pursuing growth and investment opportunities and reinforcing the company’s public profile, to name but a few”.

ACM & Associates, which was the transaction advisor for CWS, and its representative Oliver Bastienne said yesterday’s listing was a culmination of one-year of preparation.

He said his company was happy and proud for having been part of this journey, which he described as a positive challenge.

With the listing new investors can now participate by buying shares of the company being sold by its existing shareholders.

In addition, SWC Ltd, as a shareholder of CWS, has made an Offer for Sale of a portion of its shares for a seven-day period beginning Monday September 26 to Wednesday October 5, 2022.

“For that period, 2% of the shares will be for sale which represents 120,000 shares.  Each share is selling at R500 and buyers have to purchase a minimum of four (4) shares,” said Mr Bastienne.

He said prior to yesterday’s listing, the company had been doing a lot of pre-bidding to market the shares and advise interested parties on the procedures.

He said the interest has been very positive.

“For the pre-bidding, we set up a facilitation office, and enlisted our preferred broker which is PKF Capital Markets (Seychelles) Limited. There has been a lot of interests. Today, with the listings we are seeing more interested individuals and companies who have expressed their intentions to invest in CWS,” said Mr Bastienne.

For its part, MERJ Exchange has thanked CWS and called on other local companies to come forward and list.

Its head of market regulations, Brenda Gobine, said MERJ Exchange will continue to provide a platform for investors and companies in Seychelles and will “continue our collaboration with the government and all market stakeholders to collectively contribute to the economic growth and the development of Seychelles”.

It should be noted that CWS recently paid out a dividend of R90 million, which was distributed among its shareholders.

The company’s biggest shareholder is the Seychelles Pension Fund which owns 22% shares. 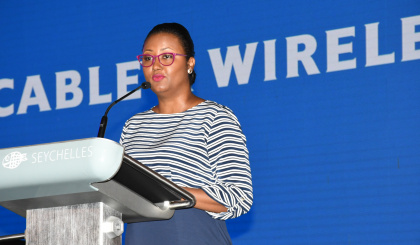 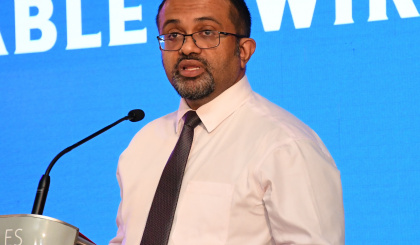 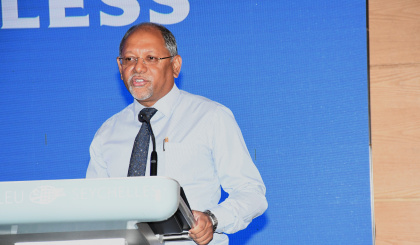 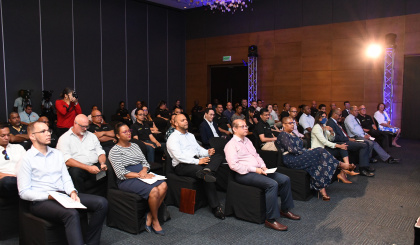 A partial view of the gathering at the ceremony