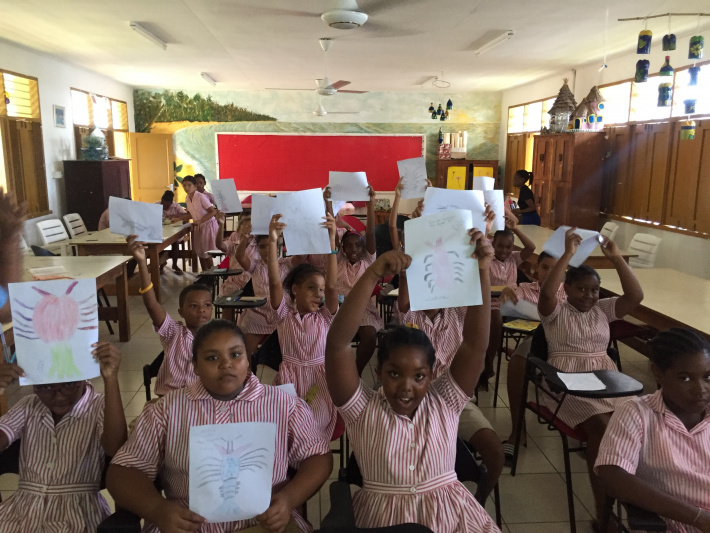 Education and awareness activity under the Lobster Project

Though MCSS was formally registered in 1997, activities really started the previous year with a one-day marine biology symposium in Victoria and a pilot whale shark tagging programme – sponsored by Underwater Centre, Air Seychelles, PADI Project Aware, Cable & Wireless and Coral Strand Hotel – which saw 21 whale sharks tagged in two weeks. Following registration of the non-governmental organisation in the year of the first International Year of the Reef, reef surveys were undertaken in collaboration with the Marine Conservation Society (UK), and whale shark tagging, as well as microlight flying, training was supported by the Shark Research Institute (South Africa).

While MCSS has been conducting active coral reef conservation in different areas around Mahé for a number of years now, initial activities were those of passive coral reef conservation. In 1998, there was a heavy outbreak of crown-of-thorns starfish prior to the mass bleaching event, and so a species management project was carried out in collaboration with Dr Udo Engelhardt. The following year, an environmental mooring project was carried out to protect coral reefs and other sensitive marine areas from anchor damage. Under the project, staff of MCSS, Marine Parks Authority (subsequently SNPA and now SPGA) and the Conservation Division (BCM) received training from Environmental Mooring Inc. and installed a total of 50 moorings in marine protected areas.

In 2001, MCSS, again in conjunction with these same government partners, implemented a series of coral conservation programmes under the Seychelles Marine Ecosystem Management Programme (SEYMEMP), such as the crown-of-thorns starfish Coral Predator Project and Aldabra reef survey extension as part of the Shoals of Capricorn Programme. Additionally, MCSS continued to monitor whale sharks under SEYMEMP deploying over 200 marker tags, and using photo-identification and satellite tracking. Whale shark monitoring had persisted following the pilot project, with citizen science playing an integral role in sustaining the programme. These efforts resulted in the milestone protection of whale sharks in Seychelles’ waters in 2003 under the Wild Animals and Birds Protection Act. After over decade of monitoring whale sharks, the programme came to an unfortunate end in 2015 following a remarkable decrease in the number of sharks visiting Seychelles coastal waters.

MCSS’ entry into sea turtle conservation followed shortly after SEYMEMP, with the Strategic Management of Turtle Populations Project, which engaged 17 turtle monitoring partners and saw the development of an online database system and the formation of Turtle Action Group Seychelles. This prompted the launch of the Integrated Turtle Beach Management Project, which entailed the monitoring of turtle nesting activity and restoration and management of the beach vegetation on Anse Intendance. In 2007, MCSS launched an innovative sea turtle satellite tagging programme to explore the movement patterns of nesting and inter-nesting hawksbill turtles. Remarkably, one of the turtles tagged, ‘Carol’, was tracked travelling over a thousand kilometres down to her foraging grounds off the northwestern coast of Madagascar, where she remained for another two years before her tag stopped transmitting! On the theme of tracking movements of marine species, from 2010 to 2012, MCSS in collaboration with SPGA and local schools, implemented a multi-species acoustic tracking programme in Baie Ternay. 30 individuals of target species (turtles, sharks and large fish) were tagged with acoustic tags that were picked up by listening stations around the marine park, which helped to identify critical resting areas for stingrays and home ranges for juvenile sharks and hawksbill turtles.

Around the same time, MCSS and the Save Our Seas Foundation implemented the Integrated Marine Science Education programme, under which the Academy by the Sea programme was launched. The educational initiative provided students aged between 12 and 14 years of age with the opportunity to learn about Seychelles marine environment, through a series of classroom presentations, water based activities and outings around Mahé. Additionally, between 2014 and 2016, the Marine Mammal Conservation Project in collaboration with the Island Conservation Society, trained 43 individuals from various organisations to monitor marine mammals by visual methods and a further 15 were trained to monitor using acoustic methods. Complementary to this, a marine mammal depredation project was implemented in collaboration with the Seychelles Fishing Authority (SFA) and the Fishing Boat Owners Association, which defined the incidence of long-line depredation, researched the associated factors and developed and trialed methods to mitigate it.

MCSS, in collaboration with Banyan Tree Seychelles, Seychelles Veterinary Services and Wildlife Vets International, in 2014 established the Wildlife Conservation and Rehabilitation Centre (WCRC), providing the first wildlife rehabilitation facility in Seychelles. Equipped with the only veterinary digital x-ray machine in Seychelles and other equipment, several sea turtles, terrapins and birds underwent rehabilitative care at the facility until its closure in 2020 due to resort redevelopment. MCSS concurrently established a number of collaborative conservation projects with the private sector; firstly at Anse Forbans with the Anse Forbans Community Conservation Programme, followed shortly in the Ste Anne Marine National Park with the Cerf Island Conservation Programme. Later similar conservation programmes were also set up with Fisherman’s Cove, Hilton Northolme, Hilton DoubleTree Alamanda and Story Seychelles, and more recently, with Anantara Maia Resort and Mango House Seychelles. These projects are centered on raising awareness on the importance and vulnerability of the surrounding marine and coastal ecosystems, and monitoring and rehabilitating them accordingly.

In 2016, MCSS was awarded a grant under the Critical Ecosystem Partnership Fund to undertake a full biodiversity assessment of one of Mahé’s last in-tact lowland wetlands, situated in Grand Police. Subsequent to which, a biodiversity assessment of the entire area was carried out and a nomination file produced for its protection as a Protected Area. The following year, MCSS implemented the Lobster Project funded under SeyCCAT, in collaboration with the University of Seychelles, SFA and local lobster fishers and collected valuable data on the habitat and feeding preferences of the species encountered, as well as information on the recruitment of lobsters on Seychelles’ reefs.

Throughout these years, MCSS’ continued conservation efforts in relation to sea turtles and coral reefs have culminated in two big grant-funded projects, the Seasonal Protected Areas Project* and the Coral Reef Restoration Project**, both multi-year and multi-partner projects. The Seasonal Protected Areas Project entails the designation of five very important sea turtle nesting sites in the south of Mahé, which the organisation has consistently monitored over the past two decades. The Coral Reef Restoration Project being implemented in the Ste Anne Marine National Park and Anse Forbans, involves the restoration of 5000 square metres of degraded coral reef, upscaling the organisation’s previous coral reef restoration activities at these sites.

The world is a very different place to one that existed 25 years ago, when MCSS first came into existence, with the need to protect our marine environment now greater than ever. Technology has advanced tremendously, with the introduction of powerful modelling computer programmes, ROVs and sophisticated tracking devices now commonly used for scientific research. MCSS has embraced these innovations, adapting along the way and leading from the front.

As we commemorate one quarter of a century, it is time to reinvent once more, so we are thrilled to launch our new logo, which while staying true to the original concept provides a fresh new look to the organisation.

We take this opportunity to acknowledge and thank all of our past and current staff, students, volunteers, partners and donors for their contributions to and support for the organisation over the years. Looking to the future, MCSS has a number of exciting new projects on the horizon, which we hope will continue to cement the organisation’s place at the forefront of Seychelles’ marine conservation, education and research.

Follow us to stay up to date on our activities! @marineconservationsocietysey / www.mcss.sc

* The nomination of the Sea Turtle Seasonal Protected Areas is funded under the GOS-GEF-UNDP A Ridge to Reef Approach for the Integrated Management of Marine, Coastal and Terrestrial Ecosystems in the Seychelles Project.

** The Coral Reef Restoration Project is funded by the Adaptation Fund and implemented by UNDP. 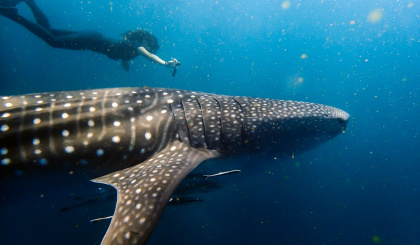 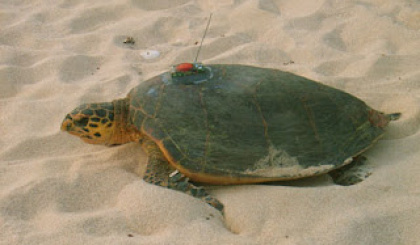 ‘Carol’ leaving the nesting beach after being tagged on December 20, 2007 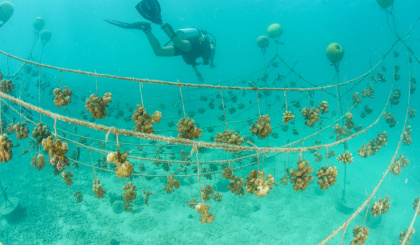 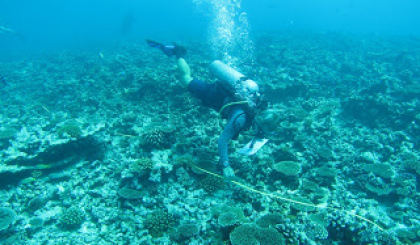