Souvenir photo of ministers of the CJSOI member states

Minister Zialor, who was in Mauritius attending the ministerial meeting of the CJSOI, has tabled a motion asking for the inclusion of these activities, specifically focusing on climate change and blue economy, a big concern to the islands.

“For several editions of the games the activities of the youth or cultural component as I said, were limited to a few activities. Even, only two: the youth assembly and music,” explained Minister Zialor, adding “if new intellectual activities are included in the programming of the CJSOI, it is believed that this will bring more positive actions in favour of young people in the Indian Ocean”.

Minister Zialor was heading a delegation who attended the experts and ministerial meetings in preparation for the 12th Games of the CJSOI scheduled to take place from December 4-11, 2022 in Mauritius.

“In three months, we will meet again, here in Mauritius, for the 12th CJSOI Games. These games represent the largest sporting and cultural meeting bringing together young people from all our countries. It's no wonder, then, that the agenda is dominated by the build-up to the games, and the charter that drives them,” Minister Zialor said.

The minister added: “If it is necessary that the CJSOI Games Charter be reviewed to accommodate these changes, I request that this be done. I note with satisfaction the proposal to create a committee which will be responsible to look at the amendments to the charter of the games.”

The ministerial meeting was attended by ministers and experts responsible for youth and sports from Mauritius, Djibouti and Seychelles, experts from La Reunion and Mayotte also attended. A technical expert meeting preceded the ministerial meeting. Madagascar and Comoros did not attend the meeting.

During the session, member states learned the latest developments and logistics arrangements with regard to the games. The theme song and mascot were also presented. Some 600 young people aged between 14 and 17 years old are expected to attend the games aimed at promoting friendship and solidarity among the youths of the Indian Ocean.

Chief executives of the Seychelles National Youth Council and the National Sports Council Penny Belmont and Jean Larue as well as Michel Savy and Kevin Vidot were also in Mauritius for the expert and ministerial meetings.

Also on the programme was a series of visits for final inspection of the infrastructure and sporting facilities which will be used for the 11 competitive disciplines on the programme, all open to girls and boys.

Seychelles will take part in all disciplines on the programme – except triathlon – as well as cultural competitions.

At the end of the meeting there was a draw for the fixtures for different sporting events to be played at the games. 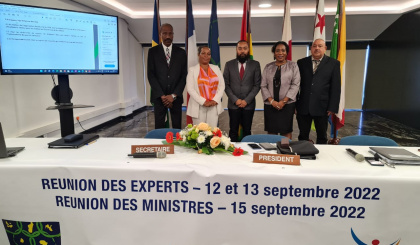