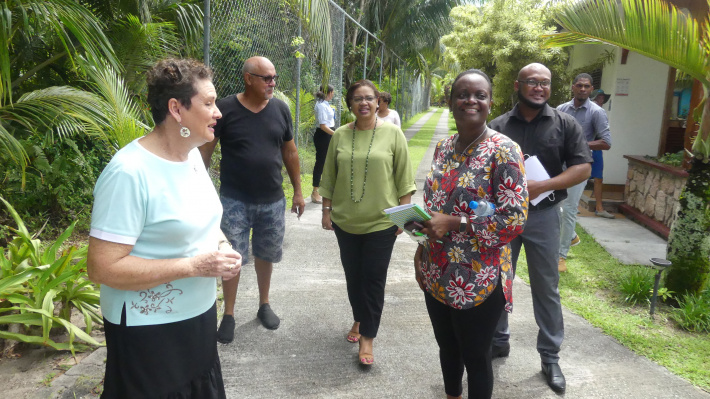 The one-day mission forms part of her continued initiative to visit workplaces in the private sector, with the aim of bettering and strengthening partnership for both employers and employees.

Accompanied by a delegation from the employment department, the aim of the visit was to gain a better overview of the work environment, discover opportunities available and the challenges faced by the organisation.

Minister Francourt stated that these visits have a crucial role to play in building relationships between the government, the specific ministries and private businesses, while also enabling the ministry to observe first-hand the impact of policy decisions.

The visits have also proven to be a valuable opportunity for businesses to discuss the strengths and weaknesses.

With around 3,000 inhabitants, there are numerous job opportunities on La Digue, especially within the tourism sector. However, tourism establishment owners conveyed the difficulties in retaining Seychellois staff in full-time employment, leading many of them to resort to foreign labour.

Between January and August 2022, there were 964 vacancies on La Digue, in comparison to zero registered jobseekers.

Despite the labour challenges, the organisations all expressed their satisfaction at having an opportunity to engage with the ministry, agreeing to continuous discussions to further strengthen ties.

Through her engagements with staff of the various organisations, Minister Francourt drew the conclusion that they all had a positive attitude, with a good outlook on work and responsibility.

Having started the visits on Mahé and following her visit to La Digue, Minister Francourt and her delegation proceeded to Praslin a week later, whereby they met with two tourism establishments, namely ‒ Islander Villa and Villa De Mer ‒ as well as the Eve Restaurant.

The two well-known guesthouses have been operational for over 20 years. The management of both Villa Islander and Villa de Mer expressed their satisfaction in having a good working environment, and as such, very good staff retention.

Speaking about her many years of experience in hospitality, one employer noted her observation that local employees take fewer sick leave than before, possibly one of the effects Covid-19 has had on workplaces.

She continued to say that she understands the perspective of both sides, recognising that there are locals who work very hard, while encouraging employers, especially from small establishments, to be a bit more understanding of their workers’ plight.

The minister was also delighted to meet with an ex-drug addict who has been successful in obtaining a job while following his methadone treatment.

Minister Francourt stated that this is a very good example of how employers can contribute in helping vulnerable groups in getting back on their feet, as provided for by a special programme under the ministry which aims to rehabilitate recovering addicts back into the world of work.

Eve Restaurant was yet another exemplary work environment with a workforce comprising only one expatriate. Although most of the staff are young, they expressed their satisfaction with their work environment.

Minister Francourt described how encouraging it was to see the young workforce, congratulating management for such an achievement.

Minister Francourt upon concluding the inner islands visits stated her satisfaction with the feedback from both employers and employees.

She congratulated the employers on their good practices in ensuring a conducive work environment for their employees.

Likewise employees, especially the long-serving ones, were encouraged to continue with their hard work and to be good examples for the younger workforce.

The visits are expected to continue in the future.

The accompanying photos show Minister Francourt interacting with staff during her visits on Praslin and La Digue.

Press release from Ministry of Employment and Social Affairs 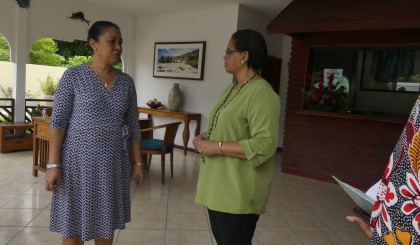 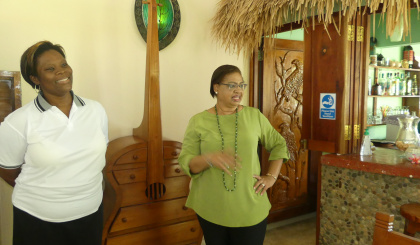 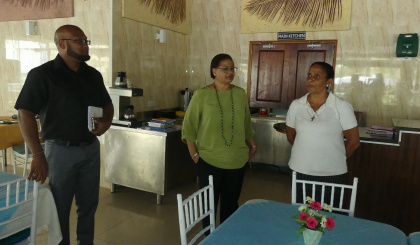 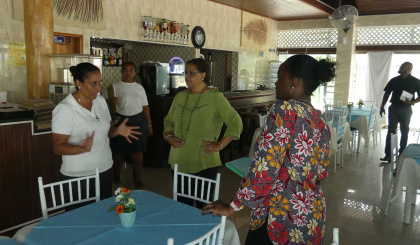